Broner: F*** The Money, I'm Not Just Coming To Get a Check

Pacquiao will turn 40 before boxing Broner on January 19 in Las Vegas, but he has opened as about a 2-1 favorite over the 29-year-old four-division champion.

“It’s gonna be a hell of a fight,” Broner said during a press conference in Manhattan to promote their Showtime Pay-Per-View bout. “All bullsh*t aside, I’m not coming to just pick up a check. F*** the money. I know when I win this fight, it’s more money to come. And y’all gave a young – well, excuse my language, but this ain’t Nickelodeon. This is pay-per-view.

“Y’all gave a young n*gga a chance to make a hundred million. Y’all got me f***ed up if you think I’m about to lose to Manny Pacquiao. I’m about to beat his mother***in’ ass, on God and ‘em. And I don’t know who them is, man – flat out.” 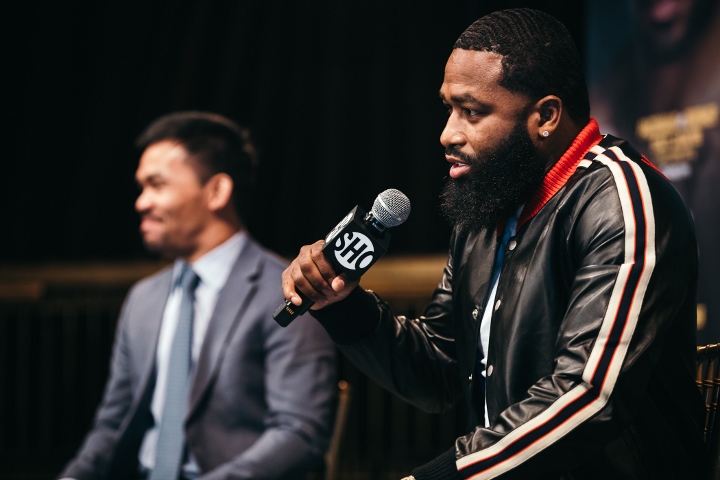 Broner behaved similarly during the first press conference for his fight against Mikey Garcia. He was insulted, Broner said in June 2017, that Garcia was so heavily favored to defeat him (5-1 initially).

Cincinnati’s Broner didn’t transform that motivation into production when he squared off against Garcia in their July 2017 bout at Barclays Center in Brooklyn.

His most recent win – a seventh-round stoppage of Lucas Matthysse four months ago – still has rejuvenated Pacquiao’s career. It also has made Mayweather consider ending another retirement to fight Pacquiao again in 2019.

When Showtime’s Brian Custer asked Pacquiao during the press conference about a Mayweather rematch, it irritated Broner (33-3-1, 24 KOs, 1 NC).

“Man, f*** Floyd, man,” Broner said. “But he ain’t fighting Floyd. He fighting me. I’m about to beat your mother***in ass. Man, you worried about Floyd. He already beat you, brother.”

Broner will end nearly a nine-month layoff when he opposes Pacquiao. He settled for a 12-round draw with Jessie Vargas (28-2-2, 10 KOs) in his last fight, April 21 at Barclays Center.

Anyone notice he actually sucks at trash talking?

Quote: Originally Posted by PunchyPotorff View Post Gee, Mr Classy himself.... AGAIN. Hope Manny makes it 2 stoppages in a row. [QUOTE=greeneye99;19285082]As bad as Broner performs in major fights I still can't see him being Knocked out[/QUOTE] It could happen.…

[QUOTE=Bardamu;19284760]Yep, AB isn't going to train or even try to win. He will probably get ko'd on a jab or a phantom punch. It is shocking anyone is so idiotic to think Broner is only taking this fight for the…

[QUOTE=PunchyPotorff;19284647]Gee, Mr Classy himself.... AGAIN. Hope Manny makes it 2 stoppages in a row.[/QUOTE] As bad as Broner performs in major fights I still can't see him being Knocked out