Breazeale: Wilder Loves To Hear His Own Voice, He's a Circus Act

WBC heavyweight champion Deontay Wilder will put his title on the line against fellow Dominic Breazeale at the Barclays Center in Brooklyn in May, both camps said on Tuesday.

Last December, Breazeale stopped Carlos Negron of Puerto Rico in the ninth round and is the WBC’s mandatory challenger. 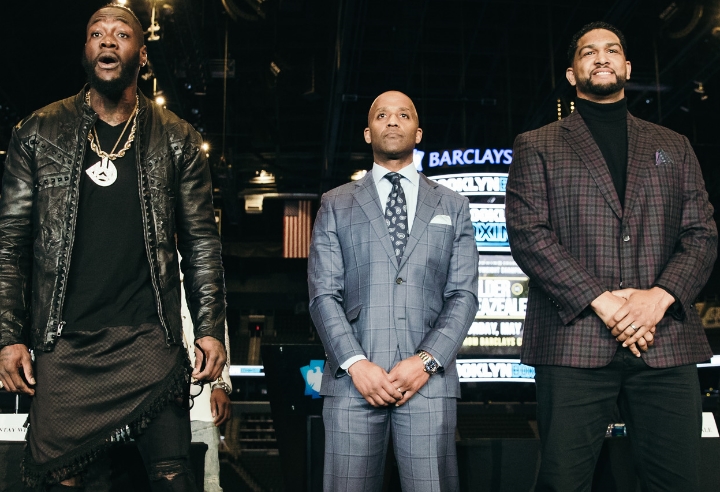 “It’s always a great thing to get the mandatories out of the way because I consider the mandatories like flies — they are always buzzing in your ear,” Wilder, known as the Bronze Bomber, said at a media conference.

Breazeale, whose only loss was to WBA, IBF, WBO and IBO champion Anthony Joshua in 2016, added he was looking forward to try and silence his fellow 33-year-old.

“I’m super excited for this. I’ve been waiting over a year and a half for a shot at this title. I’ve got three knockouts here at Barclays Center and I can’t wait for another.

“I’m a great fighter but there are always things to be learned. I’ve learned a lot already with Virgil Hunter. I bring something that everyone wants to see from heavyweights, and that’s trouble. I’m going to bring pressure and action.

“I’m sick of seeing this guy walking around with his belt. I’m going to put him down. People are going to be rising to their feet when I knock him down.

“I’m so excited to get this fight. I’ve been on Deontay’s undercards and I steal the show every time. Deontay does nothing right in the ring. He looks like a circus-act. All he does is talk. But there’s nothing he can say on May 18.

“Deontay loves to hear his own voice. All he does is talk and talk. It’s time to get in the ring. Nobody can get in there and save him. It’s just me and him. Leather on leather. We’ll see who lands first. Hopefully he gets off the canvas.”

It's funny how breezy says this but when he fought Joshua he was the same way a big mouth circus act hahahaha.

Not sure Breazeale is confident on himself. His mien exudes fear and anxiety, hence he could not say much because he knows that it may be difficult for him to back it up

[QUOTE=Redgloveman;19601308]I like my boxers to be good boxers. If you want a personality contest and wacky characters then watch day-time tv[/QUOTE] I like good boxers too, you miserable twonk. I also like a bit unpredictability in my sportsmen. Does that…

[QUOTE=He just called him out and his annoying looking lap dog that follows him around everywhere.[/QUOTE] That sidekick got clowned hard as well by Breazeale for getting knocked out lol

[QUOTE=Carlisle;19600659]Wilder’s act is getting old. Fury made him look like an amateur.[/QUOTE] Yes until wilder chopped his ass down like a tree