Former world champion Brandon Rios, should he beat Ramon Alvarez on Saturday night, could land himself a clash with fast-rising welterweight prospect Josh Kelly, according to promoter Eddie Hearn.

Rios will collide with Alvarez in Kansas as part of the Matchroom USA card which features heavyweight contender Jarrell 'Big Baby' Miller in the main event.

Rios (34-4-1, 25 KOs) will return for the first time since getting knocked out by Danny Garcia in brutal fashion in February 2018. 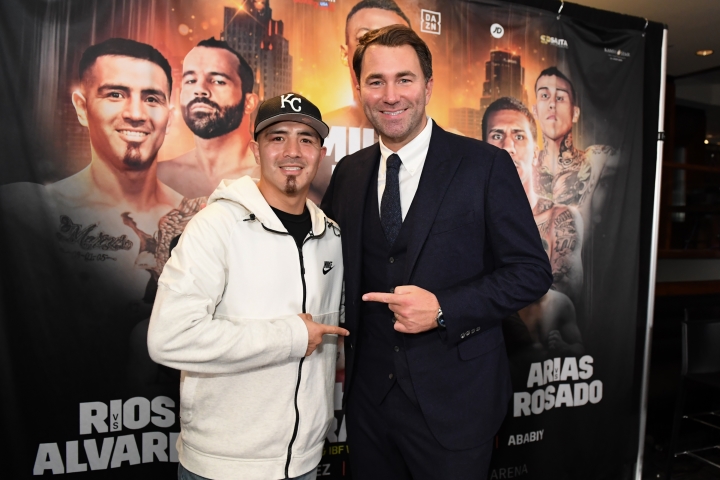 Kelly (8-0, 6 KOs) has a big step-up fight ahead, when he takes on another former world champion David Avanesyan, as part of Kell Brook's card in Sheffield on December 8.

A fight between Rios and Kelly has been mentioned in the past.

"Yes, definitely. Basically Rios wants to operate at a level above where Kelly is at the moment. He wants the big fights still. If he beats Alvarez, I think he'll be looking to do that, and Alvarez wants to take all the fights that are out there for Rios," Hearn said to Sky Sports.

"This is really about seeing what Rios has got left. If he's still the fighter he has been, he should beat Alvarez. Kelly has now got to get past Avanesyan, and there is the argument that Avanesyan might even be stronger than Rios at the moment, in terms of levels."

Last weekend, Kelly impressed with a first round demolition of Walter Castillo.

Afterwards. he discussed his desire to get in the ring with Rios.

"Rios is definitely on my radar, I'll be keeping my eye on how he does this weekend," Kelly told Sky Sports. "I never look past opponents I have first, but I would love to fight him. All these fighters, it's nothing personal, I just want step ups and to get in the mix. I want to get to the top."

That seems like a horrible style matchup for Rios. I'd rather see Rios vs Alvarado III or Rios vs Ortiz than any other fight for Rios. Obviously not likely those fights are makeable now doe.

[QUOTE=lolpz;19276743]He gassed because he faced an extremely resilient opponent who came forward and walked through fire to break him down, along with his eye socket. Against Khan, I don't see making 147 being a problem for him on fight night.…

Josh kelly is the next big thing

[QUOTE=angkag;19276266]I think at 147 Brook would be handicapped to the point where Khan might be able to do it. Brook showed he couldn't last more than 6 rounds without gassing 18 months ago, and will fade even faster now. 154…