Ireland’s Taylor beat Belgium’s Persoon by majority decision in their 10-round lightweight title unification fight in June 2019 at Madison Square Garden in New York. Their closely contested slugfest seemingly could’ve gone either way, yet two judges scored it for Taylor and one had it even (96-94, 96-94, 95-95).

That’s just the type of back-and-forth fight Braekhus expects August 22, when Taylor and Persoon are set to meet again on the grounds of Matchroom Boxing’s headquarters in Brentwood, England.

“I think it will be a very hard fight,” Braekhus told BoxingScene.com. “I think Taylor will edge it because I think she was surprised by Persoon and the power she has the first time. This time, she will be better prepared and do the adjustments. I think Taylor will take it.” 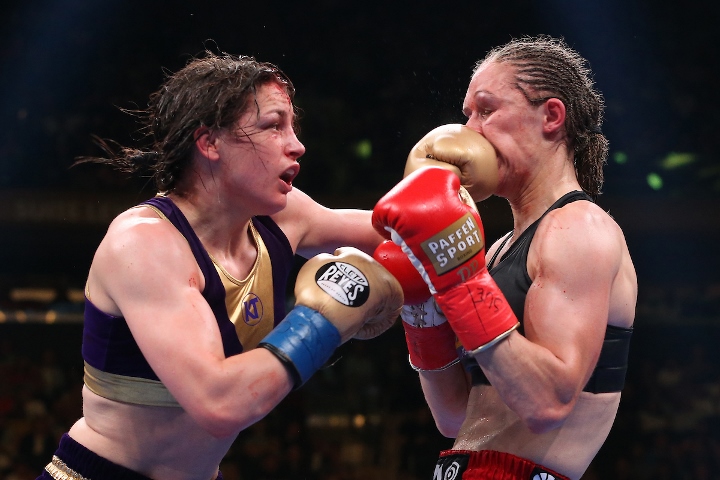 The 34-year-old Taylor (15-0, 6 KOs) was supposed to face seven-division champion Amanda Serrano (38-1-1, 28 KOs) on August 22, three months after they were first scheduled to box in Manchester, England. Once Brooklyn’s Serrano, 31, turned down the Taylor fight on its proposed rescheduled date, Taylor’s promoter, Eddie Hearn, put together a rematch with the 35-year-old Persoon (44-2, 18 KOs).

“Persoon is a brilliant fighter,” Braekhus said. “She’s strong, so I don’t wanna take anything away from her. Did she surprise Katie Taylor with her strength and her stamina? Yeah, a little bit – definitely.”

If Norway’s Braekhus (36-0, 9 KOs) conquers Chicago’s Jessica McCaskill (8-2, 3 KOs) on Saturday night in Tulsa, Oklahoma, the long-reigning, 38-year-old welterweight champion likely will fight Taylor next if Taylor tops Persoon a second time. Those two fights are viewed by Hearn and Braekhus’ handlers as an unofficial four-fighter tournament, but Braekhus declined to discuss possibly battling Taylor at a catch weight between welterweight and lightweight.

Taylor-Persoon II will be part of the Dillian Whyte-Alexander Povetkin undercard a week from Saturday night. Sky Sports Box Office will televise Whyte-Povetkin and the Taylor-Persoon rematch on pay-per-view in the UK.

Crediting Katie's team with the respect they dererve, I feel in no doubt that she was well aware that fighting Define Persoon would involve physical challenges beyond anything she had faced before. By listening to Katie's pre-fight comments, she had…

[img]https://i.imgur.com/p8dEQTf.gif[/img] SKYSPORTS : Adam Smith, Matthew Macklin, Paulie Malignaggi, David Haye had Delfine Persoon winning. Katie Taylor can not call herself the 'Undisputed' women's champion of the world. 44-[B]1[/B]-0, should be Persoon record. AND THE NEW!