Bradley: Mikey Garcia is a Dangerous Fight For Lomachenko

Two weeks ago, Lomachenko captured his third divisional title with a tenth round stoppage of Jorge Linares at Madison Square Garden in New York.

During the sixth round of the fight, Lomachenko suffered the first knockdown of his career in the pro ranks. 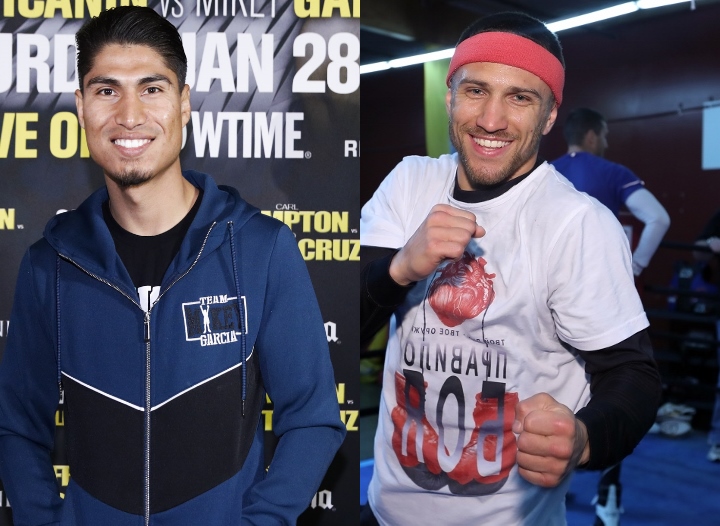 Garcia, a four division world champion, recently captured a world title at 140-pounds - but then vacated the belt.

He plans to return to 135-pounds and is likely heading for a unification with IBF champion Robert Easter in late July.

"It's a great fight. I want to see it. It's an unbelievable fight. We saw with Linares, he had some success with that speed in spots. He did well when he let his hands go. Mikey is dangerous. He's dangerous, he's smart. He's not as quick, but he has really good timing," Bradley told BoxingScene.com.

Bradley was impressed with Lomachenko's ability to bounce back from the first knockdown of his pro career - and he believes that knockdown has likely made Garcia more confident.

"[Garcia] probably got on the phone and said 'let's make this fight happen.' Loma is a smaller guy, he's taking risks. You don't see a lot of guys moving up three weight classes right away," Bradley said.

"[When he got knocked down] I just thought 'he's real, he's not Neo from the Matrix.' He's a human," Bradley said. "I loved how he bounced back from that. That's what makes a real champion. He has a loss on his record, but he doesn't have to be undefeated to be great."

Lomachenko's return is being targeted for August 25th at The Forum in Los Angeles. The likely opponent is WBO lightweight champion Ray Beltran.

[QUOTE=Catrin;18796840]The manner in which Mikey beats them comes with the lost of stock! both were real whoopings not to mention the brutal KO[/QUOTE]Do you think the reaction would be the same if Lomachenko had KO'd Zlaticanin, or won a title…

[QUOTE=genrick;18794889]Why is this fight even talked about? Didn't these Garcia brothers announce they're not fighting Loma anytime soon? What's the point?[/QUOTE] Bob paid them not to fight Ho[COLOR="Black"]mosexu[/COLOR]alchenko. He's such a chicken that he ran away from 126 to avoid…

[QUOTE=Bronx2245;18793830]Why are Eastern European fighters like Zlaticanin and Lipinets so highly praised until Mikey beats them? When Zlaticanin beat Burns and Petrov, he was "a beast!" Dejan was 22-0 w/ 16 KOs before Mikey obliterated him with one of the…

Quote: Originally Posted by PunchyPotorff View Post Although Loma and Garcia are thinkers in the ring, I believe Garcia is a bit moreso. And Garcia is more meticulous, and doesn't take quite as many chances like Loma does. Plus he's…