David Adeleye made short work of Matt Gordon in their heavyweight clash, securing a second-round stoppage to go with the first-round win he managed in his debut in December.

The Londoner, a former ABA champion, pounded away at Gordon from the start , eventually dropping his opponent with a string of rights in the second round. Refereee Alexander refused to let Gordon go on, stopping it at 2 min 44 sec. 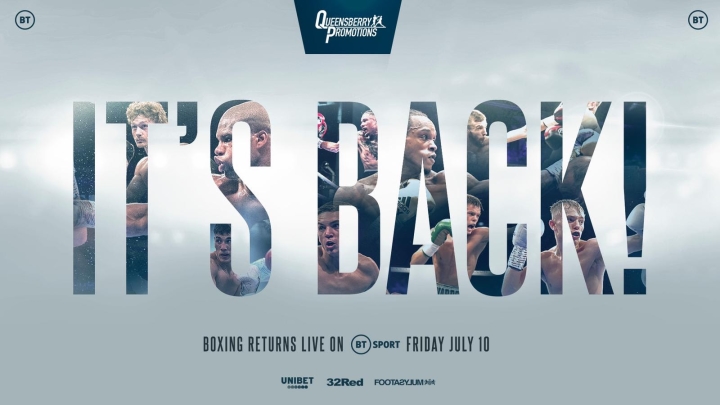 Hamzah Sheeraz hailed the influence of former world champion Colin McMillan as the 21-year-old super-welterweight extended his unbeaten record to 11 fights with a one-sided win over Paul Kean.

The Scot was retired by his corner at the start of the seventh round, having been dropped in the first and on the wrong end of a steady beating. Sheeraz, who retained his WBO European belt, said that the input of McMillan, the former WBO featherweight champion, had been a big help.

“He has been a massive influence,” Sheeraz said. “To get the insight of a former world champion who has been at the pinnacle of the sport and has the utmost respect of everyone, you can’t go wrong learning off him.

“He comes in the gym every day, watches our session and for about half an hour afterwards I will sit down with him. It’s more mentoring than anything else. He tells me what I can do and what to work on.”

Sheeraz made a quick impact, dropping the tentative Kean with a snap right hook as the Scot tried to move along the ropes in the first round.

It wasn’t a devastating knockdown, but it was enough to make Kean wary, as Sheeraz was able to dictate the early rounds at distance.

Kean had a better round in the fourth, but got little reward beyond a bloody nose for his efforts and Sheeraz then upped his output in the fifth, landing repeatedly with combinations, as Kean struggled to get any punches off. He lasted until the end of the sixth, before Kean was pulled out.

“It was a good victory,” Sheeraz said. “It hasn’t been a good camp, but under the circumstances we dug deep and go the win.

“It was a mature performance and one I can build on. Seven rounds is the most I have even gone. I can sit down with Eddie (Kelly, his trainer) and work on the negatives of that performance.”

Dorin Krasmaru, a Ukrainian heavyweight living in south-east London, had four rounds of target practice before extending his unbeaten record to three fights with a points win over Phil Williams.

Williams took his lumps and was brave, occasionally throwing a punch but mostly covering up against Krasmaru, who had a nice jab, decent variety of punches and an impressive workrate.

In extending the Ukrainian the full four rounds, Williams lasted longer than Krasmaru’s first two fights combined, which have been spread over three years. He will be straight into the Peacock gym next week, where he is the regular sparring partner for Daniel Dubois.

Referee Alexander scored it 40-36. It was Alexander’s 25th defeat from 29 fights.

Krasmaru piled on the pressure in the first round, finding a gap in Williams’s high guard with his right hand and then switching the attack to the body. The beating continued in the second round and by the third, Williams had mostly gone into his shell. There was a brief attack by Williams in the last, but he seemed satisfied to hear the final bell.

“It was a nice performance, nice place, for me it is new,” Krasmaru said. “I wanted a stoppage but there was too much emotion.”

Mark Chamberlain took less than a minute to win the first fight in the UK after lockdown, as Stu Greener failed to get past the unbeaten lightweight’s initial onslaught.

The last time he had been in a ring, Greener had pulled off an upset, beating unbeaten prospect Tyler Davies, but he was giving away a huge amount of height and could not really get close to Chamberlain.

The fight was the first that had taken place in the UK since March 14, the show-opener on Frank Warren’s Queensberry Promotions card at the BT Sport Studios in London.

After attempting an early attack, Greener was pinned back on the ropes and then staggered by a left hook. Chamberlain followed up and dropped with a right to the body and another left hook.

Greener made it off the floor at the count of five, but Chamberlain was right on him, shrugging off Greener’s attempts to hold to batter him back to the ropes and force the stoppage from referee Michael Alexander at 55 seconds of the first round.

Chamberlain extended his unbeaten record to six, four of whom failed to survive a round.

“I didn’t expect it to go like that,” Chamberlain said. “They were good clean shots, I didn’t rush in, my footwork was good, my hands we good and every punch counted.

“It’s a little bit different. It’s a bit like sparring, but there are probably more people in the gym when you spar.”

These pointless cards are well, pointless. Doesn't do our sport any good .