It’s been less than a year since WBC featherweight titlist Gary Russell Jr. (30-1, 18 KO) was last in a ring, which considering his annual appearance calendar since winning the title feels like a thing all its own.

Russell is making noise about wanting to be more active and see the bigger names. There is a real obstacle in his way. Russell is attempting his fifth defense against a serious challenger in Mongolia’s Nyambayar (11-0, 9 KO).

A silver medalist at the 2012 Olympics, Nyambayar didn’t join the pro ranks until 2015 but he’s advanced through solid veteran fare to get here. This is one of the better matches on paper on Showtime in months. Lineal Jr. featherweight titlist Guillermo Rigondeaux will also be in action, moving down to face Liborio Solis for a WBA sub-title at bantamweight. 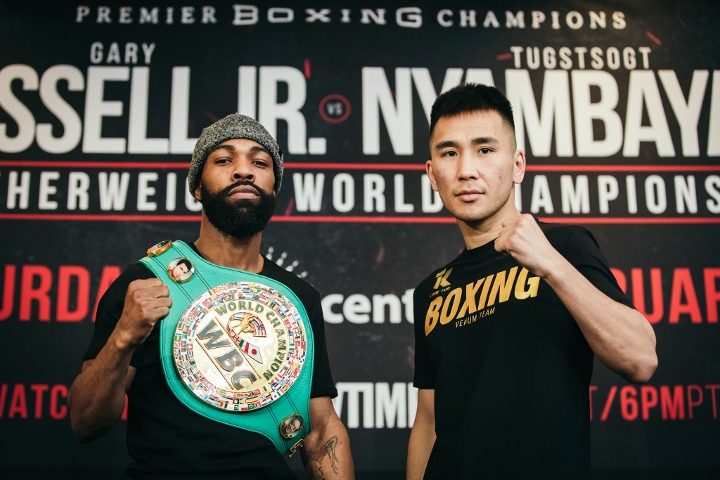 Former WBC welterweight titlist Kell Brook (38-2, 26 KO) makes his third start at Jr. middleweight since consecutive stoppage losses in a challenge of then-middleweight titlist Gennady Golovkin and a welterweight title loss to Errol Spence. Mark DeLuca (24-1, 13 KO) has won three straight decisions since suffering his lone defeat in June 2018. To his credit, DeLuca immediately reversed the outcome in a rematch with Walter Wright.

A thirteen fight show from Dayton Beach will be headlined by the son of heavyweight legend Evander Holyfield. His son Evan (2-0, 2 KO) doesn’t have Dad’s size but it’s hard not to be curious of what the young Jr. middleweight might turn into. Holyfield will face Travis Nero (1-5, 1 KO) as he gets his boxing’s legs underneath him.

Gary Russel Jr is full of talent and gifts. Too bad he's full of s#!+ too. I always enjoy his 1 time a year defenses.

Groundhog Gary! I always look forward to him coming out around this time a year