With the growing likelihood of only getting one fight in for the year, Teofimo Lopez Jr. was going to make it count.

The unbeaten 23-year old Brooklyn native did just that, not only pushing for a fight with three-division titlist Vasiliy Lomachenko but also forcing the action once they met in the ring on October 17.

The end result was a clear unanimous decision win over one of very best in the sport for Brooklyn’s Lopez, which was more than good enough to earn BoxingScene.com’s 2020 “Fighter of the Year” award.

“Wow! This is amazing,” Lopez told BoxingScene.com upon learning of his latest year-end award haul. “I really thank BoxingScene for giving me this tremendous honor. I sincerely appreciate it.”

The year began with Lopez fresh off of a 2nd round knockout of Richard Commey to claim his first major title. The win came just 15 fights into his 37-month pro career after having represented Honduras in the 2016 Rio Olympics. Lomachenko (14-2, 10KOs) was seated ringside for the Dec. 2019 bout at Madison Square Garden in New York City, where the two were looking to meet last spring in front of a massive crowd.

The ongoing coronavirus pandemic shut down those plans along with the sport as a whole. The global health crisis hit particularly hard in New York during the initial wave—which at the time served as the epicenter of the infectious disease—prompting the asthmatic Lopez and his wife, Cynthia to relocate to Jonesboro, Arkansas where they stayed with his sister-in-law.

From there came the groundwork to get in shape for whenever he was able to return to the ring.

Plans called for the fight to be rescheduled for last fall, to take place live from Top Rank’s bubble on MGM property in Las Vegas. Talks hit a wall at one point, with a breakdown over financial terms nearly causing both parties to look elsewhere for their next ring assignment. Lopez (16-0, 12KOs) and his team—including father and head trainer Teofimo Lopez Sr. and manager David McWater (both of whom are 2020 BWAA nominees for Trainer and Manager of the year, respectively)—found a way to get the fight over the line and into the ring.

‘The Takeover’ was officially underway, once the opening bell sounded for their Oct. 17th clash in Las Vegas. Lomachenko struggled with the pressure provided by Lopez, who held the Ukrainian southpaw to dismal punch output numbers while building up a sizable lead through the first six rounds of their championship fight. 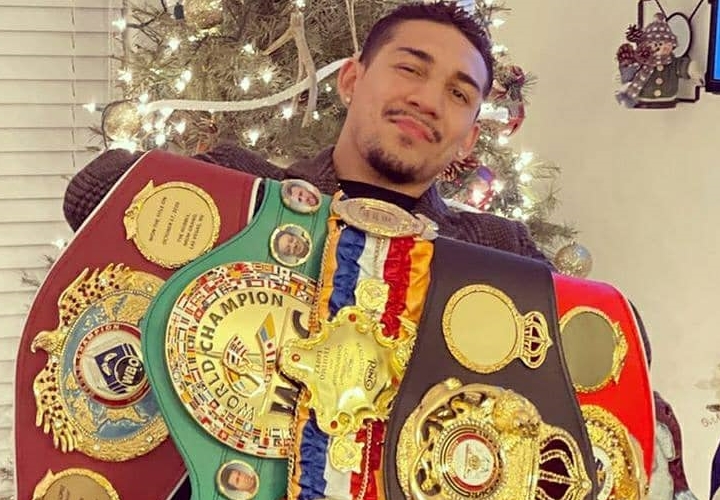 Lomachenko came alive in the second half, prompting far more two-way action than was the case earlier in the contest. Lopez slowed down just a touch in the later rounds before closing the show in an action-packed 12th and final round to seal the biggest win of his career—and of 2020—in just his 16th pro fight.

“That’s what it’s all about in this sport,” insists Lopez. “This fight was about making history, doing things that have never been done before. I want to keep doing things that people have never seen before - not just in this sport, but leave a historical legacy like [NBA legend Michael] Jordan, like LeBron [James, current NBA superstar]. Even in the NFL, Drew Brees, Aaron Rodgers… guys like that.

“Just for that, the fact that we were able to make the fight no matter the cost was, I was going to take the fight. I didn’t care. We ended just saying “F” it, went full steam ahead and just went out and took it.”

Twelve championship rounds later, Lopez took the lightweight division by storm—and top honors in the Fighter of the Year race once all was said and done.

The runners-up for BoxingScene.com’s 2020 “Fighter of the Year” award are listed below, in alphabetical order.

Jermell Charlo: The lone ring appearance for the Charlo twins came on the same Sept. 26th Showtime Pay-Per-View event. Jermall went first, delivering a spectacular performance in soundly outpointing Sergiy Derevyanchenko in their 2020 BoxingScene.com Fight of the Year-nominated title fight. Not to be outdone, Jermell Charlo (34-1, 18KOs) overcame a stiff challenge from unified WBA/IBF titlist Jeison Rosario to score an emphatic 8th round knockout. The win allowed Charlo to leave the ring with three belts (WBC/WBA/IBF) in tow, along with re-establishing championship lineage for the first time since Floyd Mayweather abdicated the throne in 2014 and confirming his place as among the sport's best pound-for-pound fighters in the world today.

Tyson Fury: The unbeaten heavyweight champion from Manchester, England was the frontrunner to win this award from late February all the way through mid-October. A 7th round stoppage of Deontay Wilder (42-1-1, 41KOs) netted Fury (30-0-1, 21KOs) the WBC heavyweight title, joining Riddick Bowe as just the second heavyweight in history to win every major title over the course of their respective careers. The win re-established championship lineage atop the sport’s most storied division, though two separate postponements and ultimate cancellation of a third fight with Wilder left Fury falling just short in the Fighter of the Year race.

Roman ‘Chocolatito’ Gonzalez: The sport’s former pound-for-pound king returned close to old form in 2020, one of the few top fighters to enjoy two fights on the year. The first placed the legendary Nicaraguan back on the title stage, dominating then-unbeaten Kal Yafai en route to a 9th round knockout to claim the WBA 115-pound title on February 29th in Frisco, Texas. His first defense came last October, scoring a 12-round decision win over Israel Gonzalez to give ‘Chocolatito’ two victories in 2020 over perennial Top 10 opposition. A rematch with World junior bantamweight king and WBC titlist Juan Francisco Estrada is set for March 13th, with the winner to emerge as the frontrunner for the 2021 Fighter of the Year race.

Kazuto Ioka: Japan’s only male boxer to win titles in four divisions, Ioka (26-2, 15KOs) once again offered proof for why the votes shouldn’t be counted until the very end of 2020. The 31-year old once again headlined a New Year’s Eve show, turning away unbeaten countryman and budding pound-for-pound entrant Kosei Tanaka—a former three-division titlist—to defend his WBO junior bantamweight championship in Tokyo. The win denied Tanaka (15-1, 9KOs) a pursuit at the history books, aiming to win his fourth divisional title faster than any boxer in history

Joe Smith Jr.: The blue-collar worker from Long Island, New York lands on the list for the second time in five years. Much like his breakout campaign in 2016, Smith Jr. (26-3, 21KOs) once again did it the hard way—scoring two wins in fights where he entered as the underdog. The heavy-handed light heavyweight contender bumped Jesse Hart out of the title mix following a 10-round decision win on Jan. 11th in Atlantic City. The feat was followed by one of his biggest wins in years, scoring a 9th round knockout of former titlist Eleider Alvarez in their Aug. 22nd title eliminator in Las Vegas.