This Friday, Travell Mazion was supposed to have been tuning in to watch his friend Vergil Ortiz make his return to the ring against Samuel Vargas.

The two had become close pals over the past year, both fighting under the Golden Boy banner and both showing promise that they would one day capture world titles. Ortiz’s journey towards the top was to resume, and Mazion wouldn’t be far behind as he called out big names in the 154-pound division.

Instead, Mazion was taken from us at the age of 24. On Wednesday night, Mazion was tragically killed in a car accident on a highway near Austin, TX. According to the Texas Department of Public Safety, Mazion’s car veered across a median and crashed head on with a car driven by 61-year old Richard Salter. Mazion was deceased at the scene, while Salter died in hospital that night.

“His personality is what you dream of in a fighter. He never complained even when people would put thoughts into his head, he was determined to be a Golden Boy fighter.

Mazion’s passing will be a cloud of sadness hanging over Friday’s event, which marks DAZN and Golden Boy’s first outing since February. The junior welterweight had become a fixture on Golden Boy events, and was perhaps one of the more memorable prospects to appear on DAZN’s airwaves during its first two years of existence, both for his performance in the ring but for his social conscience as well.

In his debut on the network in August of 2019, Mazion honored victims of gun violence during his entrance prior to his bout against Jeremy Ramos. The event was in Grand Prairie, TX, and was seven days removed from the mass shooting in an El Paso Wal Mart that claimed the lives of 23 people. In an unprecedented move, Mazion went to DAZN producers and requested that he walk to the ring with no music, and that both the commentators and the audience remain silent in honor of the victims. 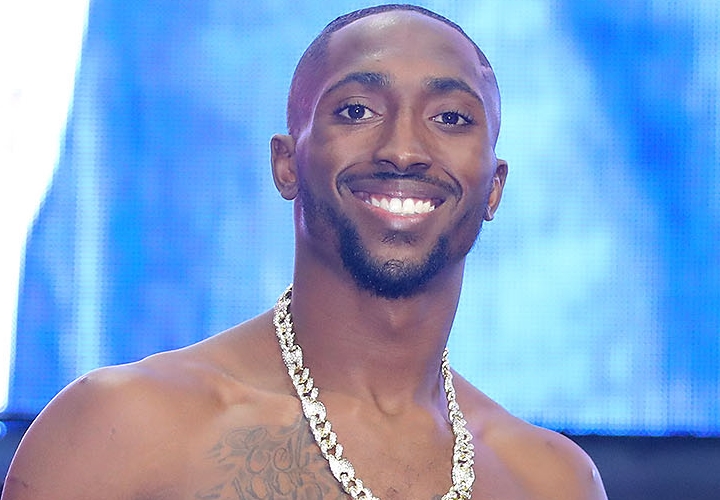 Boxing is no stranger to ten bell salutes, moments of silence, or even social or political messaging on fighters’ entrance or ring attire. But rarely do fighters petition a network to address real world events and also use their own platform to perform a touching tribute. Mazion’s level of empathy, maturity and confidence was well beyond his 24 years.

The night of Mazion’s tribute was also the night he and Ortiz met for the first time. Ortiz was main eventing in his hometown, ultimately stopping Antonio Orozco in six rounds, while Mazion scored a unanimous decision over Ramos in an eight-rounder.

“I had never met the guy before, but as soon as we met we were laughing and talking like we knew each other for years,” Ortiz told Andreas Hale of DAZN News. “I never hit it off faster than (with) Travell. It’s a shame that we didn’t hang out more after. Not only was a good boxer and a good person, but he was also a great showman. I was entertained when I watched him fight. He was very charismatic.”

Ortiz told Hale he would be dedicating his fight against Vargas to Mazion, who would have turned 25 on the night of the event.

“He had more character than people three times his age,” said Gina Ball, one of Mazion’s best friends. “He never judged anybody. He was always laughing. If he walked into a room and it was solemn and the vibe was off, it took five seconds and Travell made the party.”

The Austin native overcame tremendous adversity even during the career he did have. He turned pro at the age of 17, beginning under the tutelage of Ann Wolfe. Wolfe is renowned for her fiercely difficult training methods, but Mazion never cracked. He became renowned for his running ability and stamina, running ten miles a day and once said he sparred 17 rounds at once the week of the fight at Wolfe’s request. The two trained together from the time Mazion was 6 until he was 19 years old.

Once Mazion left Wolfe, he ran into an abundance of bad luck. Between 2015 and 2017, he needed 25 months off due to autoimmune hepatitis. A year after his return, he suffered a biceps injury, and an elbow injury as well.

But by 2019, it seemed “Black Magic” had found not just his stride professionally, but a new joy in training. Having the sport taken away from him for lengthy periods of time, he discovered a new appreciation for the Sweet Science. Under new trainer Ozell Nelson, he began studying the legendary fighters of the 50s and 60s, found a new idol in Sugar Ray Robinson, and adopted a more playful, stylish approach in the ring. The week of his bout against Ramos, he told reporters he “didn’t want to just look for the knockout anymore, he wanted to have fun in the ring.”

“His goal was to become champion of the world, and then he wanted to become a coach. That was his goal, that was his plan,” said Ball, who herself is the third registered female boxing coach in the history of Arksansas.

Mazion’s final fight would occur on January 11 of 2020, when he knocked out veteran Fernando Castaneda in the first round in a bout aired by DAZN. The one-round wipeout forecasted great things for Mazion in the near future—Castaneda was a notoriously tough opponent who in his previous outing had fought contender Tureano Johnson to a draw. In defeating Castaneda so easily, he had established himself as one of the 154-pounders knocking on the door of title contention.

However, it’s what he did afterwards that made him the man people closest to him will miss dearly.

“My daughter had her first tournament, and she was just beside herself because she lost. Number two in the nation is not shabby, that's still pretty amazing. It was the same night as his fight when he went 17-0 and my daughter was all in her feelings. They were like brother and sister, that was her guy,” recalls Ball. “He's having this huge celebration party, everything's going on, he's the man in the hour, and he stepped outside and he was freaking out like, hey, why isn't she answering her phone?

“For Travell Mazion to take time out of his celebration party to call her and check on her and see how her fight went. Can you imagine being 12 years old and that happening? It didn't matter that she didn't win at that point. As soon as her best friend called her, she was cool with life.”

Mazion’s humility is something Gabion has fond memories of as well.

“One of the first things I had to do was to assist DAZN activations so right around the start of the NBA we had a good truck out. Well we have a suite at Staples Center and Travell and Cleveland his manager wanted to see if we could get them in. So I managed to get them to the game and then into the suite. They thanked me via text,” said Gabion. “But what I learned today from Cleveland was that after the game Travell huddles his team and tells them let's clean the suite. I was floored when I heard that. Next time I saw Travell was in San Antonio and he had the biggest smile thanking me.”

Ball is now organizing an effort for this Friday to honor her late friend. She is asking fans, friends and fellow fighters to film themselves releasing purple balloons into the air and post it on Mazion’s official Facebook page.

“Purple was his favorite color,” said Ball. “I would love for his mother to see all the lives that he touched. If they could take a moment and let some purple balloons go, maybe write a little note and send it up to heaven to let him know that we miss him, and he did more than he'll ever know.”