During the Covid-19 global pandemic, Quebec-based boxer Kim Clavel traded the gloves for scrubs and returned to nursing to help senior citizens knock out the virus.

The 29-year-old Clavel (11-0, 2 KOs) will be recognized for her courageous actions when she receives the Pat Tillman Award for Service at The ESPYS on June 21.

"It is an honor to receive the Pat Tillman Award on behalf of all the health care workers battling COVID-19 on the frontlines," said Clavel, per ESPN. "Just as Pat put his NFL career on hold to serve his country, I felt the same duty to serve my community. Although recently I have pursued my dream of boxing, helping people is my passion and I'm proud to be able to make a difference." 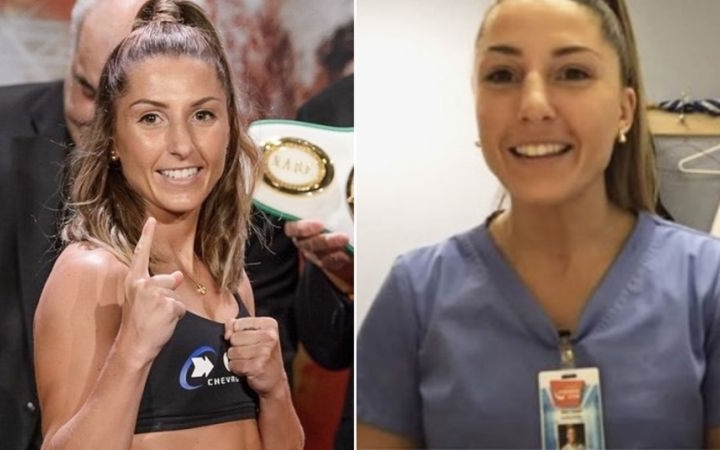 Clavel has been a pro since 2017 and has only fought in Canada. In August of last year, Clavel took a leave from nursing to fully devote herself to boxing. By December, she secured the NABF light flyweight title with a win over Esmeralda Gaona Sagahon.

Clavel is ranked number 3 by the WBC and IBF and number 7 by the WBA in the 108-pound division.

As coronavirus halted the sport and scrapped Clavel’s clash with Esmeralda Moreno on March 21, the Canadian reconsidered her role in nursing.

In recent months, Clavel has been helping cure the disease as an overnight nurse at retirement and elderly care centers.

"I said to myself, 'OK, I'm healthy, I have two arms, two legs, and I can make a difference. I want to do it,'" Clovel told CBC. "I know I can help them, but they help me, too. Sometimes I talk to them, and they have so much knowledge — and they like to share it with people. This is amazing ... I stay in shape. And when everything goes back to normal, I will not start at zero. I'm healthy right now. I'm not too heavy. I'm not far from my fight weight."

Marie Tillman, board chair and co-founder of the Pat Tillman Foundation, said Clavel personifies the spirit of service, duty and selflessness that her husband embodied.

"In spite of the dangers from COVID and delays to her budding boxing career, Kim chose to focus her energy on those most in need,” said Marie. “In Pat's name, we are honored to present the Tillman Award to Kim for her service and leadership in her healthcare work and throughout this crisis."

The Pat Tillman Award for Service is named after the former Arizona Cardinals defensive back who left the league in 2001 to serve in the military shortly after the terrorist attacks in the United States on Sept. 11, 2001. Tillman, a four-year pro in the NFL, was killed in 2004 while serving in Afghanistan.

[QUOTE=MxicoFistology;20594966]So is she a vocational nurse or a registered nurse?[/QUOTE] Not sure how it is in Canada but most urban hospital systems are looking to hire RNs and many prefer those with BSNs. At least that’s what my friends who…

lol can't believe the establishment is still milking Tillman as some patriotard. He was most likely executed by his fellow soldiers, because he turned against the illegal Iraq War and was going to make it public. He was planning to…

Good stuff. She looks hot too

They should do the same for Zab

[QUOTE=LoadedWraps;20595001]X2. She deserves recognition and respect, but I'll stick to mens sports even beyond boxing, personally.[/QUOTE] Absolutely agree with that as well. I don't mean to offend but come on.