Ricco Rodriguez has been here before. As a former UFC heavyweight champion who ruled his division before network deals, international expansion and major mainstream exposure, Rodriguez knows all about being in a situation where the perception of his sport didn’t match the reality.

And now he’s back, participating on a June 2 card in Cheyenne, Wyoming that will mark the first sanctioned, regulated and legal bare knuckle boxing event in United States history. The idea of bare knuckle fighting will undoubtedly find the same detractors mixed martial arts did in its early days, but just as MMA broke through, the 40-year-old Rodriguez believes the same will be true of his new sport.

“I’ve been down this road,” he said. “I believe in it and I think this is something that’s gonna entertain. I feel like this is the one thing where you’re gonna get together with your friends and watch a pay-per-view live. This is something that’s gonna bring that old school, bringing your friends and your family together, and watching a real good fight.”

Rodriguez will be joined on the card by several notables from the MMA and boxing world, including UFC vets Joe Riggs and Bec Rawlings. But for aficionados of bare knuckle fighting, the selling point for the card is undoubtedly Bobby Gunn, a legend of the game who is also no stranger to boxing fans, having compiled a 23-7-1 record in the ring that included fights with the likes of Roy Jones Jr., James Toney, Glen Johnson and Tomasz Adamek.

Gunn lost those fights to the aforementioned quartet, but in bare knuckle fighting, he owns a reported 73-0 record, which accounts for his lofty status in that world. And as the 44-year-old explains, the two sports are miles apart.

“It’s a different world, a hundred percent,” Gunn said. “Boxing is checkers and bare knuckle boxing is chess playing. (In bare knuckle) It’s a slower pace, you’re picking your shots, you’re working the body more. And you gotta be careful. You’re not throwing the hardest punch because you don’t want to break your hand.” 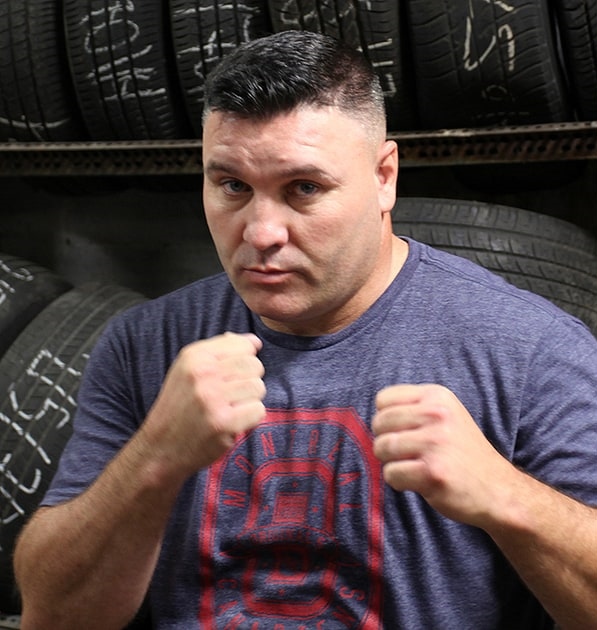 As he describes it, it’s not a wild brawl full of bloody faces and flying teeth punctuated by a brutality not fit for polite society. That doesn’t mean those in polite society are buying that description. It’s why the quest to get sanctioned hasn’t been an easy one.

“Twenty eight states said no,” said David Feldman, President of BKFC. “We pitched 29 and got lucky on the 29th. They saw our vision. Brian Pedersen is the chairman of the board for the Wyoming Combative Sports Commission, he saw the direction that we were going, that we were running towards regulation and it needed to be regulated because it was happening in the state and he gave us our chance. But our battle up until now was an uphill battle with 28 people saying no to us, so it was tough to stay motivated and keep pushing forward. But I’m a former fighter and I’m in the fight business, so there was no place to go but to keep pushing.”

“In boxing, there are like 20 fighters that die every year,” said Gunn. “There has never been a death in bare knuckle boxing. Not once. People think it’s human cockfighting. No, it’s not. It’s not barroom brawls and streetfights. It’s two men that are good at their sport that are participating in a fair play bare knuckle fight. And now it’s going to be officiated by sanctioned judges and referees. It’s a breakthrough.”

The June event, which is being held at the Cheyenne Ice and Events Center, will not resemble what you’ve seen in movies or grainy YouTube videos. Held in a 22-foot circular ring, bouts will be contested over anywhere from five to nine two-minute rounds. Wrists and thumbs are allowed to be taped, but the knuckles are exposed. It’s the recipe for a fun night of fights, but part of the appeal of the bare knuckle scene was its raw, underground, outlaw feel. How will being sanctioned and on pay-per-view dilute that feel?

“I don’t think it’s gonna ruin it in any way,” said Gunn. “Here’s why – whatever I’ve done and whatever the bare knuckle boxers have done in the past, that’s a part of history. But now history is advancing to a better athlete and what Dave has done is regulate the bare knuckle boxing and he modified the rules. The fights I come from, there’s no time limit and no rounds. Now there’s rounds and it’s modified, and I believe because it’s modified, there’s less time and there’s gonna be more action and I think it’s going to be more entertaining and a lot of good fighters are going to be coming over to this sport.”

When Gunn talks about bare knuckle fighting, it’s as if he’s an evangelist, and you can feel his passion for something that has been part of his life for almost as long as he’s been on this Earth.

“I had my first fight at six years old as a baby,” he said. “I was born and bred in fighting and, to me, I have a harder time going to the mall shopping with my wife than I do having a fight. (Laughs) Fighting is probably therapy for me. It’s a release for me and I enjoy it.”

But nothing lasts forever, and in stark contrast to most fighters, Gunn knows it.

“This is my last year of fighting probably,” he said. “I got another two or three fights in me and I’m gonna wrap it up. I’m very happy where I’m at. I’ve had a great boxing career, I’ve boxed the best fighters in the world and it was the highlight of my life sharing rings with legends and boxing royalty. And in bare knuckle boxing, I’m considered the royalty. This is my world, and this is a great time to see my sport go to levels that they said would never happen. And now it’s happening. This ain’t for Bobby Gunn. It’s for the Bobby Gunns out there.”

Gunn’s sentiment is genuine. There are no potential sour grapes for being a pioneer that won’t not reap the rewards future fighters may if bare knuckle boxing takes off. He knows what he’s done and he’s content knowing that other people know as well.

“I look at (Royce) Gracie coming out in the first UFC and Ken Shamrock, and those guys never really got to reap the benefits the guys are today,” Gunn said. “But as a fighter and a warrior, once a legend, always a legend. In bare knuckle boxing, I’m a legend and I’m gonna compete in this fight and I’d be quite happy to stand behind the camera and help commentate down the road and maybe be a part of the company. The first crack out of the gate is the most important because what we’re doing now is history. For me to be a part of that, I’d be quite happy.”