Bob Arum: We Think Ajagba Can Be Among Top Heavyweights In The World

Bob Arum isn’t sure about the pace at which his promotional company will move heavyweight prospect Efe Ajagba.

Arum and his matchmakers will have a better sense of the unbeaten Nigerian’s readiness for tougher fights after he faces Jonnie Rice on Saturday night in Las Vegas (ESPN+). If Ajagba annihilates Rice in their scheduled 10-rounder in Las Vegas, his handlers likely will allow him to take some semblance of a step up in competition in his second fight for Arum’s Top Rank.

Regardless, Arum anticipates Ajagba developing into one of the top heavyweights in the world. That’s why Top Rank signed the 2016 Olympian to a multi-fight contract earlier in the summer.

“He looks like he’s the goods,” Arum told BoxingScene.com. “We’re hoping for the best. We think he can be among the top heavyweights in the world. We’ll see what we see from him. He’s fighting an experienced guy, but he should be able to beat him. With heavyweights, you just hope for the best. Let’s see the fight on Saturday, before we make a judgment. I’ve seen some of his fights that he had when he fought for [former promoter Richard] Schaefer. But we’ve gotta see him up close, figure it out and have our matchmakers make a decision [about how to match him].” 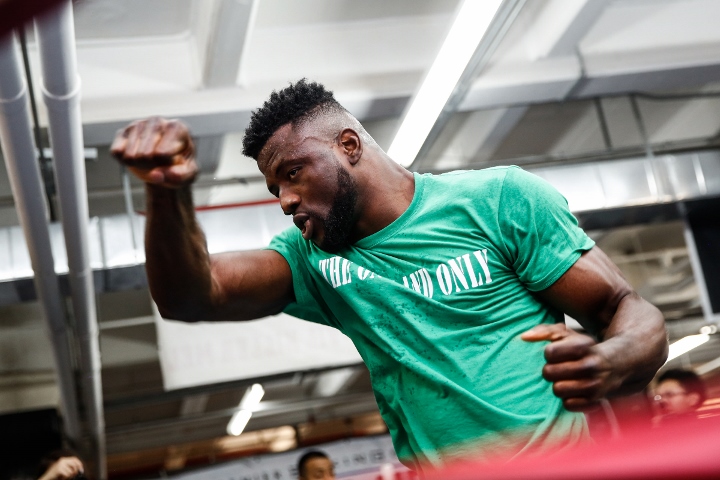 The 26-year-old Ajagba (13-0, 11 KOs) will fight for the first time with his new trainer, Kay Koroma, in his corner when he encounters Los Angeles’ Rice (13-5-1, 9 KOs). Ronnie Shields trained Ajagba for his first 13 professional fights, but he changed trainers when he signed with manager James Prince and Top Rank.

The 6-feet-6, 242¼-pound Ajagba stopped Romanian veteran Razvan Cojanu (17-7, 9 KOs) in the ninth round of his last fight, March 7 at Barclays Center in Brooklyn. He survived the most ominous moment of his three-year pro career in his previous appearance, a third-round knockdown, by dropping and stopping Georgia’s Iago Kiladze (26-5-1, 18 KOs) in the fifth round of their December 21 bout at Toyota Arena in Ontario, California.

Ajagba has not much time to prove him self at Top rank. There is Jared Anderson coming. If Ajagba won`t look good in next fights, he will be the next generation gatekeeper.

Arum put Ajagba in with Jonathan Rice, aka Jonnie. Ajagba pronounced agagabaha and Jonnie like john+E. Jonnie is no joke, he beat Makhmudov who beat Samual Peter. Not the guy that wrote Trunky: The Transgender Junky but the one that…

[QUOTE=LDBC Slayer;20769559]It's an open secret in boxing. Ajagba used to spar Luis Ortiz back in the early 90s[/QUOTE] hahahahahaha

No, he is not, lol. people here kept trashing Whyte for losing to Povetkin, but Whyte is still a space shuttle for Ajagba.

[QUOTE=Slimpack;20769555]Your opinion or a fact? Provide a source, please.[/QUOTE] It's an open secret in boxing. Ajagba used to spar Luis Ortiz back in the early 90s