Bob Arum: The Lomachenko-Crolla Fight Got Shoved Up Our Ass

Anthony Crolla clearly wasn’t the opponent Bob Arum had in mind for Vasiliy Lomachenko’s next fight.

Lomachenko’s promoter had designs on matching the WBA “super” lightweight champion against IBF champ Richard Commey in a 135-pound title unification fight. When Commey suffered a hand injury during his second-round knockout of Isa Chaniev on February 2, a doctor prescribed Commey two months of physical therapy and rest.

That pushed back a Lomachenko-Commey bout and left Lomachenko (12-1, 9 KOs) to instead accept a fight against England’s Crolla (34-6-3, 13 KOs), the mandatory challenger for his title. They’ll fight Friday night at Staples Center in Los Angeles. 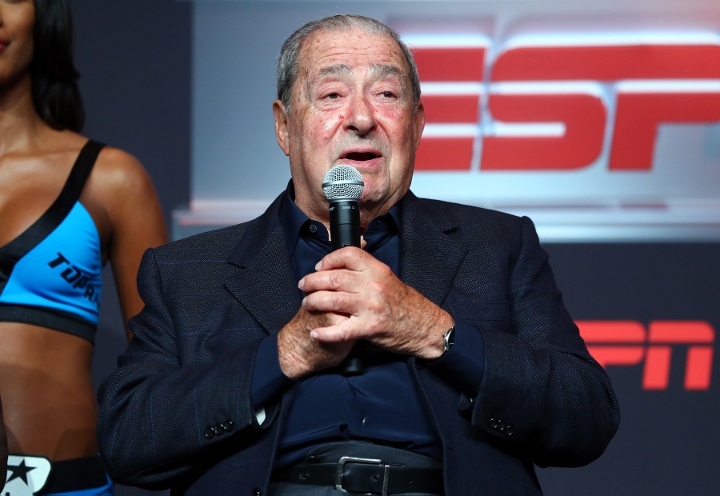 Numerous Internet sports books list Lomachenko as a 100-1 favorite over the former WBA world lightweight champion in a fight ESPN+ will stream.

“The fight got shoved up our ass, with the mandatory, and thanks to our friend, Eddie Hearn, who thought he’d go to purse bid and have Lomachenko fight at least one time on DAZN,” Arum told BoxingScene.com, referring to Crolla’s promoter and the streaming serving with which Hearn works. “We disabused him because we told him that would be the start of a war that they couldn’t win [with ESPN]. And sanity prevailed. We overpaid for Crolla, and that’s what you’re gonna see on Friday night.

“That being said, Crolla, while not the most seasoned guy, is a tough Englishman who was a world champion. And he’s gonna try his ass off to win. It should be an enjoyable fight. But it’s certainly not the fight, given our druthers, that we would’ve made.”

The only way Lomachenko could’ve avoided the Crolla fight would’ve been to give up the WBA lightweight title he won by knocking out Jorge Linares in the 10th round last May 12 at Madison Square Garden in New York. The two-time Olympic gold medalist is adamant about attempting to win all of boxing’s recognized lightweight titles, thus Arum didn’t even try to persuade the three-division champion to vacate that title.

“You’ve gotta understand that my guy Lomachenko is an eastern European,” Arum said. “They love to pile up titles, they love to unify and they don’t like to give up belts. There was no chance I could convince him to walk away.”

[QUOTE=Corelone;19644434]Gary Russell fights once a year, we wont see him until next year. The Axeman was too sick to defend his feather weight title even once. Marriaga was a featherweight moving up, Rigo was tiny in comparison. Linares got owned…

Well that's one way to sell a fight lol

[QUOTE=BoxingIsGreat;19646316]Why is it always about corrupt belts with such outrageous rankings? How did that GGG belt hunting go? Look at GGG now and the jokes he's fighting.[/QUOTE] That's the boxing organization for ya. GGG next fight is a tune up…

[QUOTE=indelible;19646300]If Lopez had a belt I think Loma would take the fight if no other champion was available.[/QUOTE] Why is it always about corrupt belts with such outrageous rankings? How did that GGG belt hunting go? Look at GGG now…