Bob Arum: ESPN Stepped Up To Keep Lomachenko-Lopez Off Pay-Per-View

Now that it’s a done deal, the 88-year-old promoter is even more satisfied that Lomachenko-Lopez will air live on ESPN. Arum told BoxingScene.com late in July that televising Lomachenko-Lopez live on ESPN remained a viable option, but that didn’t become a reality until college football conferences began postponing seasons and ESPN offered a larger license fee to keep their lightweight title unification fight off pay-per-view and even ESPN+, the network’s $6-per-month streaming service.

The working date for Lomachenko-Lopez is October 17, though that could change, according to what Arum told BoxingScene.com. Their 12-round, 135-pound championship unification match will take place inside the ESPN/Top Rank “bubble,” at MGM Grand Conference Center in Las Vegas, because fans cannot attend that card.

“What I’m most proud of is it’s clearly the best fight since the pandemic started,” Arum said. “It would’ve been a major fight even without the pandemic, and now it’s being shown to the public without an extra charge. Nobody has to pay 5 cents to watch it. You don’t even have to be subscribed for $4.99 a month to watch it on ESPN+. If they’re a cable subscriber or a satellite subscriber, they get it for nothing.” 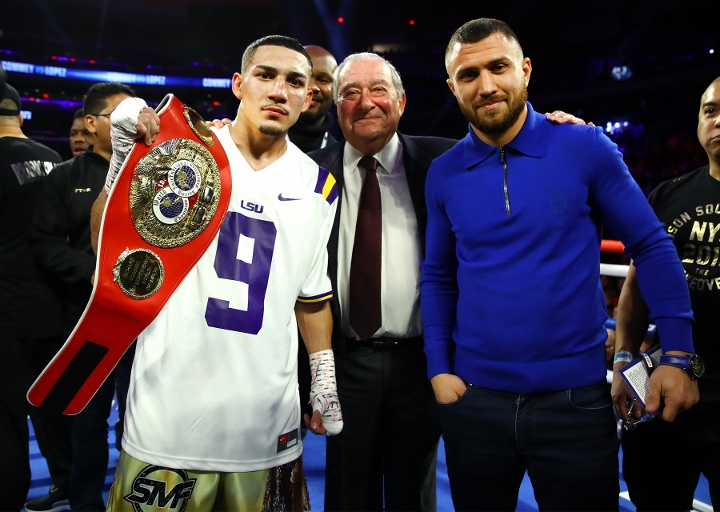 The highly anticipated Lomachenko-Lopez fight figures to emerge as the most-watched boxing match televised in the United States since the sport returned to American airwaves June 9. Had ESPN offered Lomachenko-Lopez on pay-per-view, it would’ve been the second of four boxing pay-per-view events scheduled over an eight-week period, from September 26 to November 21.

“One of the people with one of the fighters said to me, ‘Well, on pay-per-view, it’d do like a million homes,’ ” Arum recalled. “I said, ‘No, it won’t. People are out of work. And sometimes people watch the pay-per-view with 10, 12 people in a home, and you can’t do that in the pandemic. People are not gonna be willing to have big crowds in their homes, and I don’t blame them.’ ESPN stepped up to the plate. They’re obviously giving me more [money] for the fight than I normally would get from ESPN, and so they’re to be complimented also. They understand there’s a pandemic, and they’re getting a major, major fight for every sports fan in the country to watch.”

Lomachenko (14-1, 10 KOs), the WBA/WBO lightweight champion, and Lopez (15-0, 12 KOs), who owns the IBF belt, were supposed to meet May 30 at Madison Square Garden in New York. Barring additional delays, their fight will have been postponed for 4½ months due to the COVID-19 pandemic.

Arum acknowledged that Lomachenko and Lopez accepted lower purses for their bout than they expected to make before the coronavirus crisis changed boxing’s economic model. Top Rank’s founder pointed out, though, that the Ukrainian southpaw and the Brooklyn-based knockout artist still will receive more money than the minimum purses to which they’re contractually entitled.

“You’ve gotta understand it from the standpoint of the fighters,” Arum explained. “They were anticipating larger purses because there were different revenue streams when we talked [about a fight May 30]. Then we lost three big revenue streams – the pay-per-view, the closed circuit because there are no restaurants and bars [airing the fight], and the live gate, most importantly. So, luckily ESPN stepped up to the plate to help us, and we were able to get these guys really good purses. Not what they were hoping to get, but again, the coronavirus is the coronavirus.”

Lomachenko will be paid approximately $3.25 million to oppose Lopez, who will earn roughly $1.5 million.

“They’re real fighters and they wanted to get it done,” Arum said. “But you have to look at it from our standpoint, also. I mean, look at the situation. We’ve been building this fight for three years and we had hoped to make a good buck on the big pay-per-view and the gate. And we’re not gonna make anything on the fight, which is OK. At least we’re getting it on. But everybody, with this pandemic, has to make sacrifices. I mean, the world is the world.

“I’ve never, in this whole time with the pandemic, asked a fighter to take an amount less than that is in their promotional contract. And what we’re talking about many times, at least in Lopez’s case, is more than we were required to pay under terms of the contract. So, even though they would get less than they anticipated, it’s more than their contracts provide [for minimums].”

Top Rank and espn showing pbc and fox/showtime how its done! al gaymon needs to do better!

[QUOTE=BlackR0bbb;20711126]This fight would not be happening unless Lopez got a bit more than $1.5MM, so that part of the article is not accurate. I believe he's getting closer to $2.5MM. All in all, Bob is still lying and talking out…

[QUOTE=R-Hand Southpaw;20716498]But ya can't can you? Lolololo. You just clowning but you mad bruh. Too fun. Lolololo[/QUOTE] Yea we’re both clowning because this is just the internet. You and I both know you wouldn’t pull this offline though.

[QUOTE=Goldie;20716496]You're a real piece of sht and if this was an offline exchange I’d beat the sht out you just off gp.[/QUOTE] But ya can't can you? Lolololo. You just clowning but you mad bruh. Too fun. Lolololo