Bob Arum: Casimero Might Fight Joshua Greer Next, Not Inoue

Naoya Inoue and Johnriel Casimero were supposed to square off Saturday night in what figured to be an entertaining bantamweight title unification fight.

Promoter Bob Arum anticipates the Inoue-Casimero postponement lasting long enough due to coronavirus-related travel restrictions that he has started seeking another opponent for Casimero’s next fight. Arum isn’t sure when Inoue will be able to travel from Japan to the United States, thus he might need Casimero to fight someone who already is in the United States once his promotional company is allowed to put on boxing events again.

“One of the possible fights we’re talking about for [Casimero] is Joshua Greer, our kid from Chicago,” Arum told BoxingScene.com. “He was gonna fight Jason Moloney, so we could have him fight Casimero. That’s a good, competitive fight.” 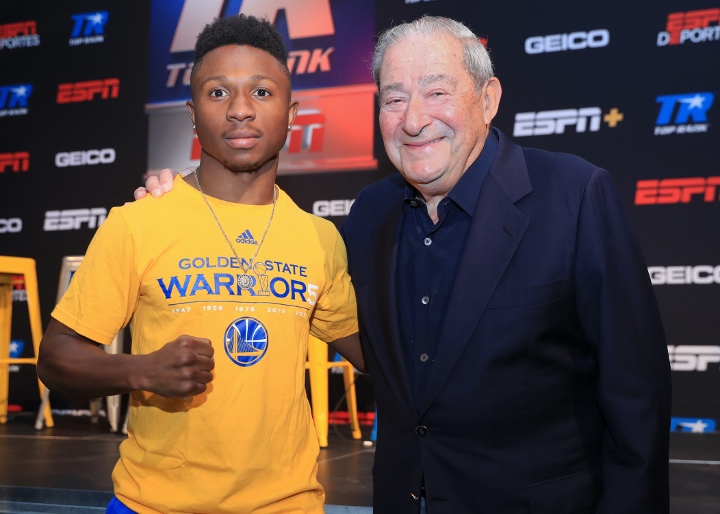 The Philippines’ Casimero (29-4, 20 KOs) has remained in Las Vegas during the COVID-19 pandemic because he was training there before his fight against Inoue was postponed. Greer (22-1-1, 12 KOs) resides and trains in Chicago.

The Greer-Moloney match was supposed to be the co-feature before Inoue and Casimero fought for Inoue’s IBF and WBA titles and Casimero’s WBO belt. ESPN was set to televise the Inoue-Casimero and Greer-Moloney bouts from Mandalay Bay Events Center in Las Vegas.

Greer recently expressed his desire to secure what he considers a legacy-defining fight against Inoue (19-0, 16 KOs). The 25-year-old Greer is the WBO’s number one contender for Casimero’s crown and the IBF’s second-ranked challenger for Inoue’s title.

“From the looks of things, it’s a good fight with Casimero,” Greer told BoxingScene.com regarding the Inoue-Casimero clash. “[Casimero is] an unpredictable, wild guy, very unpredictable. It’s a good matchup. I’m just looking for the winner, either or. I’m gonna take care of my business against Jason Moloney, beat him and I’m looking toward the winner, and I’m ready for either one.”

If Greer goes straight to Casimero, the winner could fight Inoue once the Japanese star is allowed to return to the United States.

“I talked to Mr. [Akihiko] Honda and Inoue’s people from Japan [on Thursday],” Arum said. “We’re thinking of bringing him over to the United States. The problem we have, of course, is the travel ban. Can we get a Japanese fighter into the country under these circumstances? I don’t know. Right now, what we’re concentrating on is American fighters or foreign fighters who are here in the United States. That way, we don’t have to worry about bringing them in from abroad for the fights we can do in the beginning.”

[QUOTE=Thraxox;20540212]Greer looks like a nice kid. Glad to see him get out of the hood life. Hoping to see more from the kid, if he doesn't beat Casimero, it's a learning curve for him.[/QUOTE] This Corona epidemic is probably the…

[QUOTE=1hourRun;20537399] Bring out the pillow. I'm happy for Joshua that he gets his shot after turning his life around.[/QUOTE] Greer looks like a nice kid. Glad to see him get…

Ohh great here we go! Arum pretending is common but how does he pump up a guy like Greer? Doesn't matter. Greer doesnt get past Moloney. Well Arum can keep throwing crap against the wall but to mention Greer's name…

Just Inoue is stuck in japan for a while

Arum getting ready to feed us crap fights again after the lockdown. What else is new? Hopefully the other promoters will be different and see the need to come out strong with some stacked cards.