Bivol Wants Unification, But Ready To Move Down For Big Fight

Dmitry Bivol laughs when I compliment him as the most patient man in boxing.

“The most patient? Why?”

Well, this was supposed to be the breakout year for the WBA light heavyweight champion, a star on the rise with the unbeaten record to go along with it. But when he steps into the ring at Wintrust Arena in Chicago this Saturday, it will only be his second fight of 2019 and it’s against Lenin Castillo, not one of the other champions at 175 pounds.

“In life I’m the same way, a patient man. It’s normal for me. Sometimes of course you want to talk a lot and get the bigger fights than the one you have. But I understand why things happen and I will wait for my chance for the big fights.”

So while Artur Beterbiev (IBF) and Oleksandr Gvozdyk (WBC) unify next week and Sergey Kovalev (WBO) gets his megafight with Canelo Alvarez next month, Bivol gets the Dominican Republic’s Castillo, not the first choice for Team Bivol, but the one they got.

“I don’t think that they don’t want to fight me,” said Bivol. “I know why they don’t fight me. It’s because maybe it’s harder to make these fights with guys who work with Top Rank. But I know it will happen one day. And I feel great. I’m happy that I have a fight because we had some problems with opponents and dates, but now I know I will fight. I feel great and confident.”

Ah, promotional entanglements, the bane of fight fans and fighters everywhere. But while patience has already been established as Bivol’s virtue, he’s also quite the optimist that his promoter, Matchroom, can work with its rivals to get the big fights done.

“Yeah, of course,” he said. “Every time, I think like an optimist because that’s the only way you can make it good for you. I hope that I will fight for another belt in 2020.” 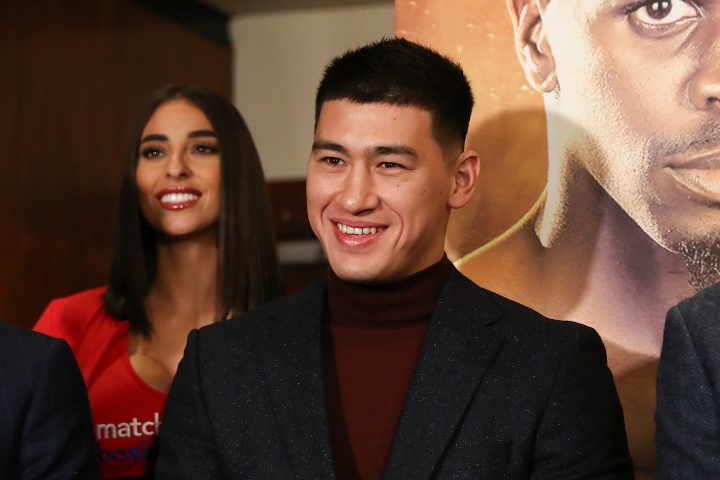 Bivol is also still open to a big fight at 168 pounds if it presents itself, an idea he’s been floating about since before his March win over Joe Smith.

“It’s better for me to fight in the light heavyweight division, but I still can make super middleweight for a big fight,” Bivol said. “If someone comes to me to move down for the big fight, I’ll move down.”

All good things for the patient optimist, but for now, there’s Castillo, the forgotten man in most interviews with Bivol this week, and though he understands that such 2020 matters will be brought up and discussed, he is also well aware that if he doesn’t beat this Saturday’s challenger, all those matters will fall to the wayside.

“I’m used to it,” he said. “But I focus on my opponent. Before every fight, people talk to me about my future and about fighting against better guys, but I can focus and it’s my experience, I think.”

That doesn’t mean he doesn’t get a few butterflies before he makes the walk to the ring.

“Of course you have a little bit of nerves before the fight,” Bivol said. “It can make you better. If you don’t have nerves, it means you’re not alive. (Laughs) It’s normal to be a little nervous, but you have to control it, and I do it.”

And through the good, the bad and the ugly of the fight game, there’s no place he’d rather be.

“I just enjoy it,” he said. “I feel comfortable in the ring, I really enjoy the feeling of the victory and I feel like I’m doing what I’m supposed to be doing.”

[QUOTE=Oregonian;20112577]——————— Kovalev, despite his 2 loss is a good boxer. He is a pure puncher/boxer. If B-Hop couldn’t hurt him and B-Hop’s style is really messy and cagey there is no way Canelo beats him. Canelo is a really good…

Bivol will be most avoided fighter mark my words

[QUOTE=theface07;20111739]Feed? I'm not so sure he beats either. I would like to see both fights but to think Bivol would tear through Canelo or Callum is foolish.[/QUOTE] I think Bivol beats both, stylistically he is all wrong for Canelo, (taller,…

[QUOTE=Satir;20111592]We dont hear much from Gilberto Ramirez, is he ready yet for Bivol, where is he? The guy with 40 fights fought 40 y.o Abraham and Jesse Heart 2 times, thats all, still to fight an elite and prime boxer,…

[QUOTE=Phill lynott;20111839]Zurdo Rameriz moved up for bigger fights. Zurdo is available and ready from what I've been reading. I think Bivol and Rameriz have alot in common. Both are avoided like the plague. If any two deserve to face each…