WBA light heavyweight world champion Dmitry Bivol is still waiting for an opponent, and hopes to fight again before the year is out.

Bivol is glad that a light heavyweight unification bout will finally come down, because IBF champion Artur Beterbiev and WBC champion Oleksandr Gvozdyk will clash in the fall.

The unification between Beterbiev and Gvozdyk is being targeted for the date of October 18. 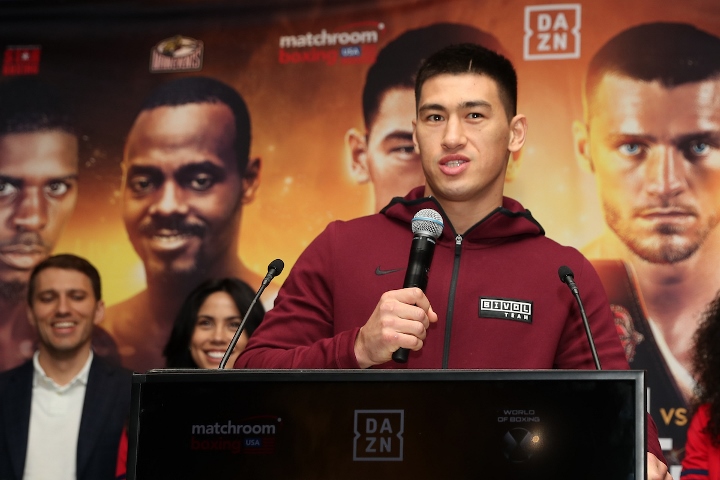 Beterbiev won 14 consecutive fights in the professional ring (all by knockout), and Gvozdyk has a record of 17 wins (14 by knockout).

WBO light heavyweight champion Sergey Kovalev is back on August 24 in Chelyabinsk, where he will hold a mandatory title defense against Anthony Yarde.

Bivol likes the fact that champions are finally facing each other at the weight.

But, the other three champions are aligned with Top Rank and ESPN, while Bivol is connected to streaming service DAZN.

“It's cool that the ice has broken. Both guys have their own style, they box well. And it’s hard to talk about who has the better chance to win. I don’t like to make predictions for fights,” Bivol said to Vasily Konov.

"Our team contacted Top Rank about making unification fights, and they have their own plans. After all, they work with Gvozdyk and Kovalev and Beterbiev - and they don't want to attract anyone from the outside."

Bivol would be willing to drop down in weight to face Mexican superstar Canelo Alvarez, who holds the WBA world title at 168-pounds.

"Marcus Browne has his own plans, he is busy. Nobody wants to wait around or stay idle. I know that Saul Alvarez has a date [in the fall], but we're both sitting around without an opponent. And we both box at DAZN. I can go down a division. I need big fights, I want to move forward, I want more titles," Bivol said.

[QUOTE=_Rexy_;19957634]I'm really leery to put Yarde up there when he hasn't even fought any full time pro boxers yet. It's hard to rank power in that regard. If Bivol went to 168 and fought a bunch of guys ranked in…

What canelo fans are talking about ??? Bivol will smash Canelo. Bivol in his prime still young and he says in interview he can easily make super middleweight. This fight will never happen cuz Canelo would get smoked. Canelos matchmakers…

[QUOTE=BoloShot;19953426]Yeah you're right Beterbiev and Johnson are just about the hardest hitters in the division and its no stretch whatsoever to put Joe Smith Jr there. His fists contain little sticks of C4 in em. Come to think of it,…

[QUOTE=Real King Kong;19949348]i can...he has plenty left to do in his own division. This cw trinket grabbing is lame. Not that I think kovalev is a walkover and the fight is without risk, but face the guy at the full…

This would be a much better matchup for fight fans than the rocky fielding bout.