The unbeaten WBA light heavyweight champion started strong, took control of their 12-round title fight early and won all 12 rounds on two of the three scorecards (120-108, 120-108, 116-112). The Bivol-Chilemba bout became monotonous in the later rounds, though, and didn’t exactly equate to riveting television three months ago at Hard Rock Hotel & Casino in Atlantic City, New Jersey.

Bivol is scheduled to return to that venue November 24, when the hard-hitting, 28-year-old champion expects to produce a more entertaining fight versus Jean Pascal. The former light heavyweight champion is more aggressive than the tactical, defensive Chilemba, who’s often a difficult opponent to look good against. 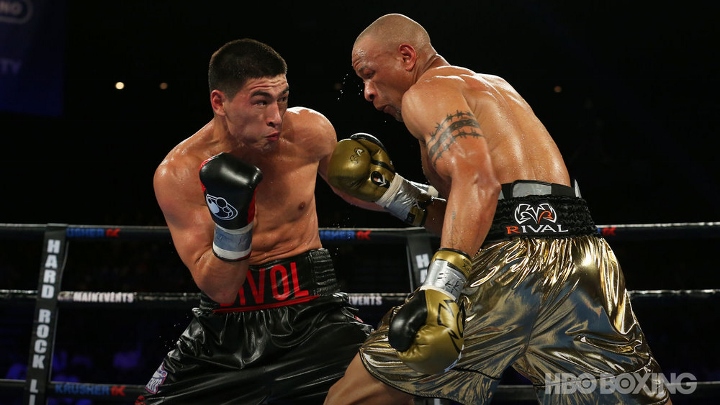 “He’s not the best opponent to put an exciting fight together with,” Bivol told BoxingScene.com. “A fighter that’s moving back a lot, it’s harder to engage with him and it’s harder to make him engage. So that definitely makes it difficult.”

The 36-year-old Pascal is past his prime, yet typically comes forward and has a style completely different from South Africa’s Chilemba (25-6-2, 10 KOs).

“The type of fighter he is makes me excited,” Bivol said of Pascal. “He’s a lot more aggressive. He likes to fight. He likes to engage. That’s good, because I think it will help us have more action in the ring and make the fight more exciting.”

“I would probably say that these are not his best years right now,” Bivol said. “But at the same time, he is on a win streak right now, he is a top-rated WBA fighter and it’s a good fight for me to defend my title. Most importantly, he’s a legendary fighter and he used to be a world champion.

“He has quite a long list of fighters that he’s fought and he has a lot of experience. He hasn’t won every fight, but he has fought very tough opponents in different weight classes. He’s a very well-seasoned, experienced fighter.”

“Every fighter finds things they don’t like in every fight,” Bivol said. “One thing I would say is that obviously in professional boxing, I hope to try to finish the fight early in every fight. So maybe me not trying to do that [against Chilemba] was a little disappointing. But at the same time, I was very, very good defensively. I don’t think I really missed any punches throughout the fight, which also is an achievement for me because every fighter is different. Not every fighter is gonna go down. It’s not always up to our plan.”

[QUOTE=rckdees;19267846]That’s the problem with these so called champions today. They want punching bags in the ring. If a fighter shows any kind of defensive skill now he’s a runner. A true champ doesn’t give a flying f%&k about your style.[/QUOTE]…

That’s the problem with these so called champions today. They want punching bags in the ring. If a fighter shows any kind of defensive skill now he’s a runner. A true champ doesn’t give a flying f%&k about your style.

[QUOTE=chubuk7;19267364]Gvozdyk has the skills to out box even Stevenson and could hurt him late in the fight. I have a feeling that we will see a new champ on Dec. 1st. Hey, folks seem damn high on Gvozdyk.[/QUOTE] Yea he…

[QUOTE=robbyheartbaby;19267347]Nothing would make me happier than to see Pascal upset the apple cart and beat Bivol. Bivol is looking to put a big name on his record but whatever prime Pascal had he lost in the fights with Kovalev.[/QUOTE] Same…

[QUOTE=dukesville;19267328]I think Bivol didn't know how to go in on Chilemba's gaurd. If you saw Chilemba vs Gvozdyk you could tell Gvozdyk wanted to ko Chilemba, he busted him up and actually made him quit.[/QUOTE] Gvozdyk has the skills to…