It’s not the dream opportunity Billy Joe Saunders expected this year, but nevertheless a chance to at least fight.

The unbeaten two-division titlist from Hatfield, England aims to make the second defense of his super middleweight belt as he faces domestic rival Martin Murray of St. Helens, Merseyside. The pair of Brits both made weight for their headlining act, which takes place Friday evening live on Sky Sports and DAZN from The SSE Arena, Wembley. 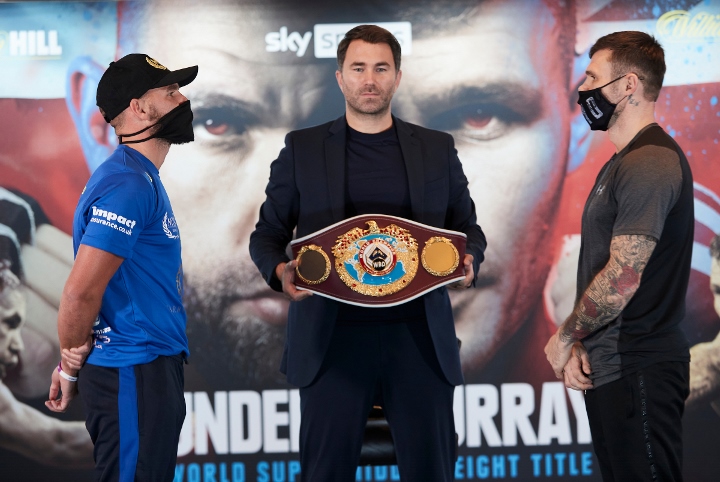 The matchup was once due to take place in 2018 at middleweight, only for Saunders to suffer two separate injuries which first postponed and then canceled such plans altogether. It was theorized at the time that Saunders withdrew in favor of a discussed unification bout with then-unified middleweight titlist Gennadiy Golovkin, only for that fight to never transpire.

Saunders also missed out on a coveted crack at pound-for-pound king Saul ‘Canelo’ Alvarez (53-1-2, 36KOs), as the two were due to collide this past May in Las Vegas. Their plans were torched due to the ongoing coronavirus pandemic, with Saunders inactive for all of 2020 until presented with the opportunity to face Murray for the second defense of the 168-pound title he won in a 12-round win over Shefat Isufi last May.

Murray enters his fifth title attempt, with at least two opportunities resulting in questionable decisions and all four previous shots coming on the road. The hard-luck challenger held Felix Sturm to a disputed 12-round draw in their December 2011 middleweight title fight in Germany, while coming up short in a questionable unanimous decision in favor of then-lineal 160-pound champion Sergio Martinez in April 2013 in Argentina.

The lone title fight in neutral territory also resulted in his most decisive defeat, as Murray was manhandled in 11 rounds by Golovkin in their March 2015 middleweight title fight. Murray moved up in weight soon thereafter, coming up just short versus then-super middleweight titlist Arthur Abraham in their November 2015 clash in Hannover, Germany.

Murray is 7-2 since then, including a modest two-fight win streak heading into Friday’s affair.

Belfast’s James Tennyson aims to extend his knockout run as he faces unbeaten Canadian prospect Josh O’Reilly (16-0, 6KOs) in a scheduled 12-round lightweight heat. Tennyson (27-3, 23KOs)—who has scored five straight knockouts at lightweight since a failed junior lightweight title bid versus Tevin Farmer—checked in at 134.8 pounds, while O’Reilly weighed 133.4 pounds for his first career fight outside of Canada.

The undercard features unbeaten Zach Parker (19-0, 13KOs), a 26-year old from Derbyshire who is the mandatory challenger to Saunders’ super middleweight title. Parker weighed 167 pounds for a scheduled 10-round stay busy affair versus Barcelona’s Cesar Nuñez (17-2-1, 9KOs), who hit the scale at 167.7 pounds.

[QUOTE=VashDBasher;20925233]The undercard looks decent on paper. Better than the Spence vs Garcia undercard at least.[/QUOTE] A bunch of euro fighters most haven't heard of. I'd say it's about the same

BJS should be carefull who he falls out. The last time Canelo offered him a fight he struggled for excuses. I think he stuck with the " I don't have enough time to get ready" excuse. Although it would have…

Saunders will beat the old Murray by wide UD

The undercard looks decent on paper. Better than the Spence vs Garcia undercard at least.