Berchelt is Open To Facing Loma or Ito-Herring Winner Next

With a victory on Saturday, Miguel "El Alacran" Berchelt will have many enticing options available.

The Cancun, Mexico native faces Francisco "Bandido" Vargas (25-1-2) in Tucson, Arizona in a rematch of their January, 2017 fight that Berchelt won via 11th round knockout.

The fight was very close on the scorecards at the time of the stoppage with judge having the bout even. The fight tops an ESPN doubleheader that also includes WBO super bantamweight champion Emanuel Navarrete facing Isaac Dogboe in an immediate rematch of their December fight that Navarrete won via unanimous decision. 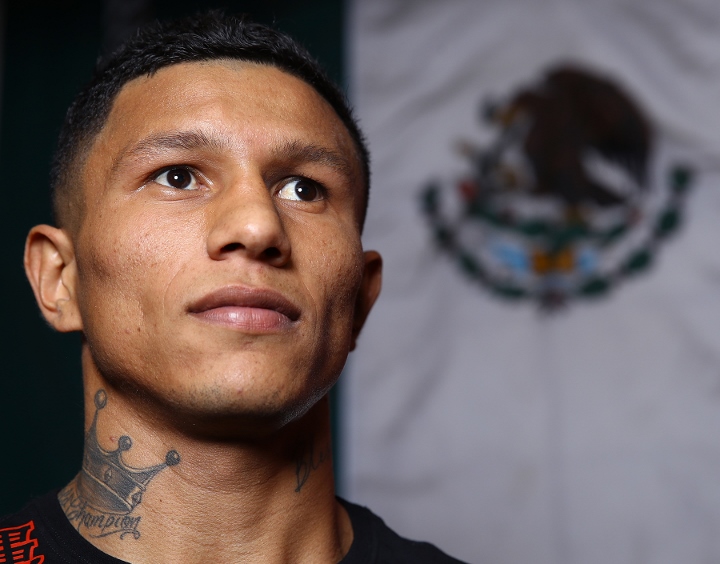 Those options could include moving up to 135 pounds to face WBA/WBO lightweight champion Vasiliy Lomachenko who could also hypothetically move back down to 130 pounds to challenge for Berchelt's title.

"I am very comfortable at 130 pounds.  We don't have any plans to move up but if they offered us a fight versus Lomachenko at 135 pounds we would definitely consider it," Berchelt told BoxingScene.com.

Berchelt said he wasn't too familiar with either fighter but welcomed a fight against the winner.

"I haven't ever seen either of them fight so I can't make an opinion on who would win.  May the best man win then later on we can unify titles," said Berchelt.

The 27-year-old knows that none of these potential fights are possible without a victory over Vargas.  He wanted to make it crystal clear that all of his focus is on Vargas and that after the fight we can talk about who could potentially be next.

"First things first. I need to win on Saturday then we can see who is next.  There are a lot of possibilities," Berchelt stated.

Part of me wonders if Loma is falling apart. Shoulder goes against Linares, hand goes against Crolla - chances of seeing out the next two fights (Campbell and Commey) without another injury ? Hopefully he can get at least two…

[QUOTE=Ajvar;19734782]WBO didn't give "cahnce", WBO is supposed to provide a championship fight in division to WBO champions of lower division. And has Berchelt EVER called out Loma after becoming champion? He was almost silent about him, mentioning his name only…

[QUOTE=Mexican_Puppet;19734608]Idio.t Berchelt was the #1 in the wbo and WBO gave the chance to Loma against Martínez Berchelt called out Loma in 2016[/QUOTE] WBO didn't give "chance", WBO is supposed to provide a championship fight in division to WBO champions…