David Benavidez doesn’t think his failure Friday to make weight is evidence that he needs to move up to the 175-pound division.

The former WBC super middleweight champion still intends to compete at the 168-pound limit when he returns to the ring for his next fight. Benavidez believes he can get down to the super middleweight maximum again if he goes about the process more responsibly than he did last week at Mohegan Sun in Uncasville, Connecticut.

“People are judging me, you know, making it seem like I’m a super-undisciplined fighter, this and that, because I missed weight one time. You know what I mean? It’s not fair, but it is what it is. But I’m definitely coming back to 168.” 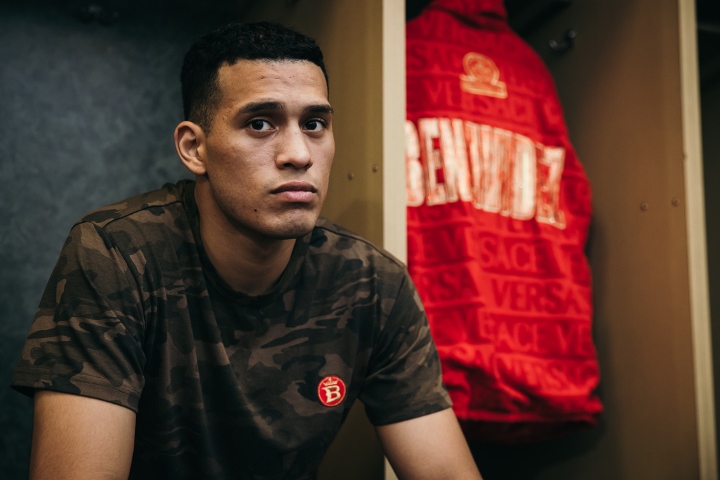 Benavidez (23-0, 20 KOs) has been stripped of the same WBC championship twice, despite that he remains unbeaten. He first surrendered that title after testing positive for cocaine in August 2018.

When Benavidez stepped on the Mohegan Tribe Department of Regulation’s scale at an alarming 170¾ pounds Friday, it marked the first time in 23 professional fights that the Phoenix native came in overweight. Benavidez was “embarrassed” and “disappointed,” yet he hopes to get a chance to win the WBC’s 168-pound championship for a third time.

Benavidez confirmed that he spoke with WBC president Mauricio Sulaiman once he missed weight. They didn’t discuss, however, whether Benavidez, assuming he beat Angulo, would’ve been afforded a chance to fight for that title against mandatory challenger Avni Yildirim.

Had he not been stripped, the 23-year-old Benavidez would’ve been obligated to make a mandated defense versus Turkey’s Yildirim (21-2, 12 KOs) in his next fight.

Regardless, Benavidez considers his performance against Angulo the best of his career because the hard-hitting Colombian had not been stopped prior to Saturday night. Their scheduled 12-rounder was halted after the 10th round, in which Benavidez battered Angulo (26-2, 22 KOs).

Yea his diet was definitely off no denying it.

[QUOTE=budfr;20715362]Some of the best champs have been alcohol and drug abusers. Whitaker, Chavez, Pryor, Tyson, etc. They were still men and great fighters but they grew up in tough environments. Go watch some college ice hockey, these are boxers we…

[QUOTE=budfr;20715359]And still gave that tough cookie a beating. Learn how a macho man works, dude.[/QUOTE]Yeah dumb dumb - It’s usually an easier night for the guy who decides he isn’t gonna make the contracted weight. What a lame statement.

If he does stay at 168 then he needs to make his move very fast because his window is small and closing. His days of making 168 are slowly to come to an end. He is simply outgrowing the division.

He should push hard for a Canelo and/or Callum Smith fight, then move up. He looks soft at 168 at times. He can very easily bulk up to 175 which is much better division, and his natural power should carry…