Ben Davison on Expanding Profile After Split With Tyson Fury

It turned out that splitting with Tyson Fury was far from the end for Ben Davison. At 27, Davison is one of the most in-demand trainers in boxing right now. He spent the first half of this year working with Billy Joe Saunders, the WBO super-middleweight champion, and on Saturday he will be in the corner of Josh Taylor for the first time, as the Scot defends his WBA and IBF super-lightweight titles against Apinum Khongsong.

Davison was largely unknown before he was picked by Fury to guide his comeback. He helped Fury lose 10 stone, regain his hunger and was in his corner for five fights, including the first fight with Deontay Wilder. For the rematch, though, Fury looked elsewhere. 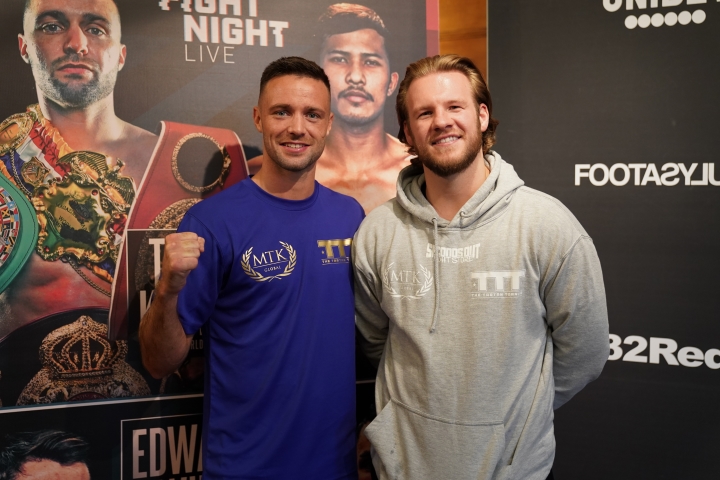 It had been Saunders who had first introduced him to Fury, so working with him seemed natural. But it was a sign of Davison’s growing reputation that Taylor picked him as his trainer after splitting from Shane McGuigan.

“They are extremely talented guys and great people to be around,” Davison said. “I have been fortunate enough to work with probably the three best fighters in the UK that happen to be three of the best in the world. It’s a pleasure.”

Most boxers leave trainers after a defeat, but Taylor came to Davison after the biggest win of his career, having unified the IBF and WBA titles by beating Regis Prograis. Still. Davison sees much more improvement in him.

“It is an exciting time, Josh has a lot of momentum behind him and what he has achieved is phenomenal, but he has only had 16 fights,” Davison said. “I can’t see a ceiling to his potential at the moment because I can see so many areas we can work on.

“I know watching him fight, you might think that is hard to believe, but there is lot to boxing. There is the training camp, the lifestyle outside the ring, preparation, weight-making, nutrition, recovery, all these kinds of things. And if you can nick a couple of percent in each area, in the long run it can make a big difference.

“On top of that he his achievements have been extensive, but you are looking at a fighter who has had 16 fights. Look at Tyson Fury at 16 fights compared to the one who has had 31 fights, you can always still improve.

“If you look at the Tyson Fury who beat Wladimir Klitschko, people wondered when he started his comeback how he could improve. But you look at him now and he has made lots of improvements. He has been in boxing a long time, but you can always learn in this game. It might be an old cliché, but it’s true.”

Taylor plcked Davison after they had a trial week together. With the Khongsong fight originally scheduled for May, training started at Ricky Hatton’s gym near Manchester before switching to Las Vegas, where Saunders was training to face Saul “Canelo” Alvarez.

The coronavirus pandemic put paid to those dates, though, and once the lockdown was lifted the pair had a month together in Spain before settling down at a gym in Harlow, Essex.

“Tyson is so versatile because we worked on new things constantly. He is able to work on the front foot and the back foot, he is able to fight on the inside because he has worked on all of these things, so when it is needed, he can use it and just as importantly he knows when to use those tools. That’s an area that comes with experience.

“Josh has so many tools in his toolbox, so if you can help him know the when, what how and why.”

While many have written off Khongsong’s chances on Saturday, Davison is not so sure, claiming it could be a tougher opponent than Jose Ramirez, the WBC and WBO champion, whom Taylor is expected to face after.

“But if Josh does a good job on Khongsong, which is what we expect, because it is no easy feat. All the Thais can punch, they are all tough, they have all been fighting their whole lives. It’s a tough task but at world level you don’t get any easy ones.”

Davison got sacked for talking to the media too much. He hasn't done anything in the game. But was acting like a big shot. Fury only hired him after Davison asked for couple of women's phone numbers for him...

We reserve judgment on Ben's influence until after the fight.

[QUOTE=Earl-Hickey;20777307]I don't rate Davidson as a trainer at all. Saunders looked awful under him, and as for Fury I'd say Ben was more useful as a gym partner to get Fury off the couch than anything else. Don't get me…

Well, Josh Taylor gonna lose soon. Don't rate the yes man,best friend, drinking buddy, hanger-on davyboy at all. some of us could see what Big John could. Too young, too egotistic/narcissistic. Too concerned with how his hair looks in front…

Ben "The Boxing Philosopher" Davison is not even a trainer though Kinahan's been lately turning him into a resident "trainer" for his boys. Mainly he's there just keep company with the boys during their visits to The Boss in Dubai.…