Ray Beltran won’t get another chance to win a lightweight world title Friday night after all.

The former WBO 135-pound champion came to the scale Thursday afternoon in Temecula, California, significantly overweight for his fight against IBF champion Richard Commey. Phoenix’s Beltran stepped on the California State Athletic Commission’s scale at 136½ pounds, a pound-and-a-half over the lightweight maximum.

The 38-year-old Beltran could’ve taken two full hours to try to squeeze down to the lightweight limit, but the Mexican veteran didn’t try to do that. He’ll still fight Commey on Friday night, but he can’t win the IBF lightweight title even if he upsets the heavy-handed champion.

However, the fight will only go forward if Beltran weighs 146.5-pounds on the morning of the fight. 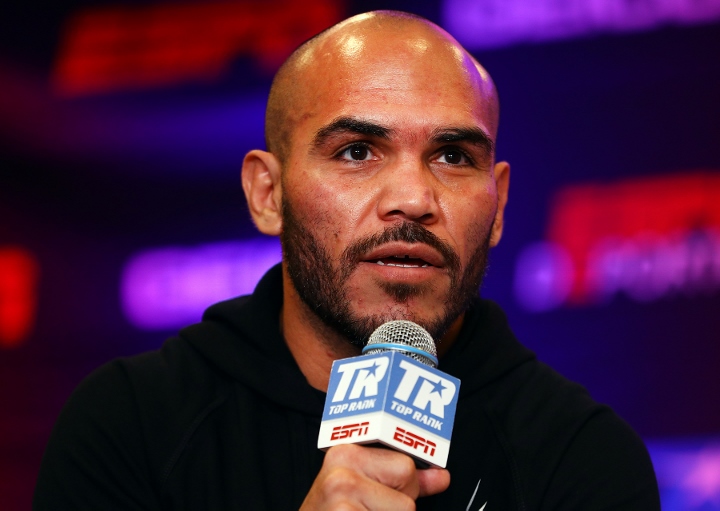 Ghana’s Commey, who would not lose the title if Beltran beats him, met his contractual obligation by officially weighing in at 134¼ pounds.

In order to keep his title, Commey would have to weigh no more than 10-pounds above 134¼ for the IBF's second day weigh-in.

Their ESPN main event was supposed to represent an opportunity for Beltran (36-8-1, 22 KOs, 1 NC) to become a two-time lightweight world champion.

Nevertheless, the 32-year-old Commey (28-2, 25 KOs) will make the first defense of the IBF lightweight title he won February 2 in Frisco, Texas. Commey knocked down Russia’s Isa Chaniev (13-2, 6 KOs) three times and stopped him in the second round to capture the 135-pound crown Mikey Garcia gave up when he decided to move up two weight classes to challenge IBF welterweight champ Errol Spence Jr.

Beltran will fight for the second time since Puerto Rico’s Jose Pedraza out-pointed him in their 12-rounder to take the WBO lightweight title from Beltran on August 25 in Glendale, Arizona.

The Commey-Beltran bout will headline an ESPN doubleheader from Pechanga Resort Casino on Friday night (10 p.m. ET/7 p.m. PT). In the opener of that telecast, Dominican junior middleweight Carlos Adames (17-0, 14 KOs) will oppose Patrick Day (17-2-1, 6 KOs), of Freeport, New York, in a 10-rounder.

[QUOTE=ShoulderRoll;19864802]Don't twist it. Lopez said he was having trouble making 135 long before Arum announced his plans to make Lopez vs Lomachenko next year. Teofimo has even said that this is probably his last year at lightweight. So the Commey…

[QUOTE=DuckAdonis;19864774]That's not what Bob said. Bob said an undisputed fight between Loma and Lopez is on schedule for next year if they beat Campbell and Commey. If Lopez runs to another weight class then he just doesn't want it or…

[QUOTE=ShoulderRoll;19864749]Lopez isn't long for lightweight. The Commey fight should have happened now and then the winner vs Lomachenko by the end of the year. Instead we are likely never going to see Lopez take a shot at greatness against Lomachenko.…

[QUOTE=DuckAdonis;19864733]Lopez and Commey are probably fighting next. You are whining just to complain[/QUOTE] Lopez isn't long for lightweight. The Commey fight should have happened now and then the winner vs Lomachenko by the end of the year. Instead we are…

[QUOTE=ShoulderRoll;19864724]This fighg is awful because Beltran is old and had his last fight at 140 lbs. And because their was a more intriguing opponent available in Teofimo Lopez.[/QUOTE] Lopez and Commey are probably fighting next. You are whining just to…