The self-proclaimed “fat, lucky guy” had no difficulty weighing in below the cruiserweight limit Friday in Manchester, England.

Tony Bellew stepped on the British Boxing Board of Control scale at 199¼ pounds for his cruiserweight title fight against Oleksandr Usyk.

England’s Bellew (30-2-1, 20 KOs) will fight at cruiserweight Saturday night after back-to-back stoppages of David Haye in heavyweight fights in March 2017 and on May 5. Bellew weighed in at 213½ and 210¼ pounds, respectively, for those fights. 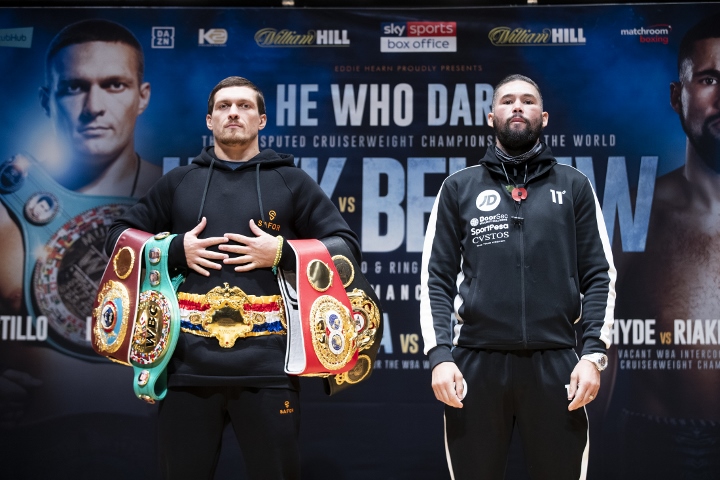 Usyk (15-0, 11 KOs) weighed slightly less than Bellew, but he is heavily favored to win their scheduled 12-round fight for his IBF, WBA, WBC and WBO cruiserweight championships. Most Internet sports books list Usyk as at least a 7-1 favorite over Bellew, who thought he would retire following his second victory versus Haye.

Bellew, who’ll turn 36 on November 30, has repeatedly promised that he won’t fight again after Saturday night, even if he pulls off what would be considered a huge upset. He has assured his new wife, Rachael, that he’ll retire following this, the 34th fight of his 11-year professional career.

Bellew is 7-0, including four knockouts, as a cruiserweight. He also won the then-vacant WBC world cruiserweight title in May 2016. He beat Congo’s Ilunga Makabu (23-2, 22 KOs) by third-round technical knockout to win that title in his hometown of Liverpool.

The 2012 Olympic gold medalist’s domination of Russia’s Gassiev in the final July 21 in Moscow moved Usyk into the top 10 on most credible pound-for-pound lists.

The Usyk-Bellew bout will headline a Matchroom Boxing card Saturday on Sky Sports Box Office in the United Kingdom (6 p.m. GST; £24.95 in HD) and a DAZN stream in the United States (1 p.m. ET/10 a.m. PT).

[QUOTE=DonSexyBeast;19260964]I doubt aj will be in a position to land those shots if he found parker to be elusive you can imagine the difficultly with usyk who may just be one of the best defensive technicians in the higher weights.…

[QUOTE=BigZ44;19259145]I'm really surprised at how many people are all the sudden leaning Bellew as we get closer and closer to this fight. They're putting way too much into 2 wins over washed-up Haye, Tony was destroyed against southpaw Stevenson and…

[QUOTE=The plunger man;19259899]Usyk will win every second of every round against bellew and probably stop him late...bellew just nees to let his hands go and hope for a hell Mary. Whether usyk will be big enough for joshua remains to…

There’s a difference between supporting our fighter, and thinking he’s going to win. Bellew is going to get taken apart. Doesn’t stop us getting behind him and making it an event.