Bellew: Fury Talks Wilder, Joshua - But He's Facing a Nobody

The contest will be the first for Fury since November 2015, when he shocked the world by traveling to Germany to win a twelve round unanimous decision over Wladimir Klitschko to capture the heavyweight titles. 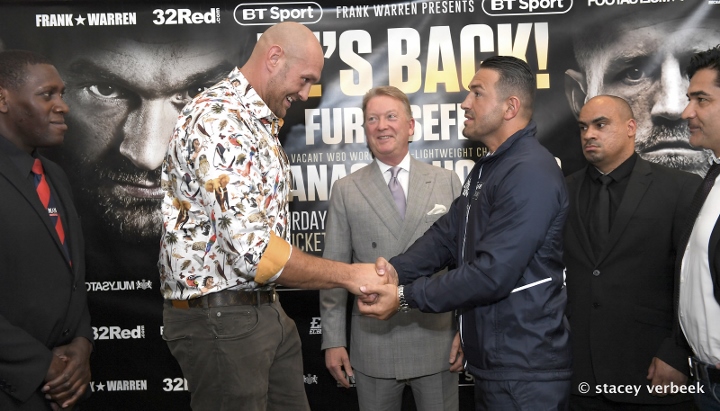 Bellew has become a player in the heavyweight division after banking back to back stoppage wins over former two division world champion David Haye.

He now wants a showdown with Fury and tried to bait the much bigger man into a fight.

But, Fury advised reporters that Bellew was too small as a heavyweight and may get seriously hurt if they step in the ring.

"He said he didn’t want to come anywhere near me because I’m a cruiserweight. But now he’s facing a cruiserweight in Sefer Seferi? I don’t understand that. This guy he’s facing, he is going to absolutely blast him to smithereens. We won’t see any of the real Tyson Fury on Saturday. We will just see him look very good, which he’s entitled to after being out for the best part of three years. His opponent is a clown, but he’s entitled to pick him," Bellew told Metro.

"Don’t forget, I criticised David Haye for doing the same thing when he came back. At least he fought a ranked heavyweight, even if it was someone who learned to fight on Youtube. I would have to class Fury the same as Haye if he picks another clown opponent. We can all get away with it once. He’s been out of the ring for many years, the first one is a gimme. But if he does it on the second one, that’s no good. That’s wrong too, because then you’re taking the fans for a ride. Making them believe something that’s not real.

" All he’s done is talk about Anthony Joshua and Deontay Wilder, but in reality he’s fighting a cruiserweight who nobody knows. You can’t talk about the big men in the division if you’re not even willing to face a real heavyweight. I’ll give him this first one, but I’ll have a problem if he continues to fight people like Seferi."

fury is the biggest wack job in HW, the guy is all talk hiding behind his deppression banner.

This fight would sell, it's a stadium fight, a big event, the personalities would send the promotion into the clouds. It's an event fight, and those are ok from time to time. Both men would make more money fighting each…

[QUOTE=1hourRun;18841187][I]"Don’t forget, I criticised David Haye for doing the same thing when he came back. At least he fought a ranked heavyweight, even if it was someone who learned to fight on Youtube.'' [/I] [img]https://i.imgur.com/DjneUj7.gif[/img] These Brits are something else.…

People just need to take everything Tyson says with a grain of salt.