Back in January, there was talk of having them face each other in an IBF final eliminator to get a crack at current world champion Julius Indongo.  A date of April 22 was kicked around, and Premier Boxing Champions is staging a card on that night at Barclays Center in Brooklyn, with welterweight Shawn Porter and Andre Berto colliding in the main event.

Indongo, who also holds the IBO title, is facing WBA champion Ricky Burns in a world title unification. The winner of Barthelemy vs. Relikh will collide with the winner of that fight. 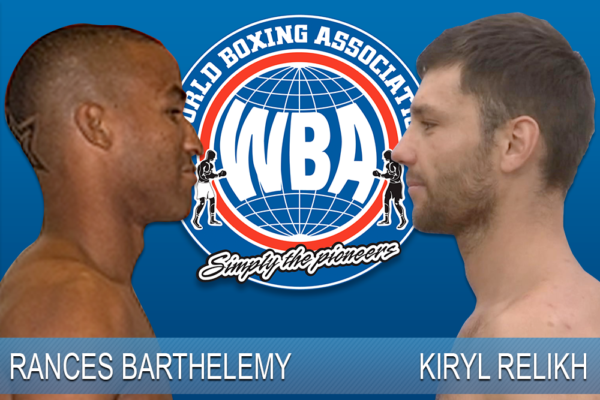 Barthelemy believes Burns will defeat Indongo, and that will set up a future fight between the two of them.

"I'm very happy because in my first super lightweight fight I'm going to be in an eliminator,'' Barthelemy said to George Ebro. "Ricky Burns refused to get into a ring with me, but when I become the mandatory challenger - he will not have anywhere to hide."

If 2016, Barthelemy left the lightweight division with a win against former world champion Mickey Bey.

"For me it's a great accomplishment, because it's glory that would not only be for me but for the whole of Cuba," added Barthelemy. "It's easy to say, but winning three world titles in different divisions requires a ton of extreme sacrifice. "

Relikh suffered a tough decision loss to Burns in October 2016 in Scotland.

Relikh, 26, spent much of his professional career in Manchester and benefited from the tremendous momentum that boxing has in the UK. His mentor and coach is the renowned Ricky Hatton.

For his part, Barthelemy continues under the orders of the prestigious Ismael Salas, who now also deals with another member of the family with the arrival of Leducho Barthelemy at the gym.

[QUOTE=My Low Place;17537323]yep 2 time champ that cant get other champs to fight him but nobody has him ranked p4p...it's bs imo[/QUOTE] p4p is who the networks want to manufacture, espn now have ggg number 1 p4p after a questinable…

[QUOTE=Bronx2245;17537307]That just made the Porter vs. Berto card a lot better! Can't wait to see if Rances is ready for Terence Crawford @ 140.[/QUOTE] i'ts not on that card..charlo hatley jut got added to that card. pbc needs to drop…

[QUOTE=MikeLazcan;17537320]Barthlemey about to pick up another strap in another weight[/QUOTE] yep 2 time champ that cant get other champs to fight him but nobody has him ranked p4p...it's bs imo

Barthlemey about to pick up another strap in another weight