Vasyl Lomachenko is not yet worthy of legendary status despite his impressive victory over Luke Campbell, according to promoter Barry Hearn.

The Ukrainian added the WBC belt to his WBO and WBA titles as he overcame Campbell with a unanimous points win at the O2 Arena in London.

Lomachenko was awarded the victory by margins of 119-108 (twice) and 118-109, having sent his opponent down with a brutal onslaught of body shots in round 11. 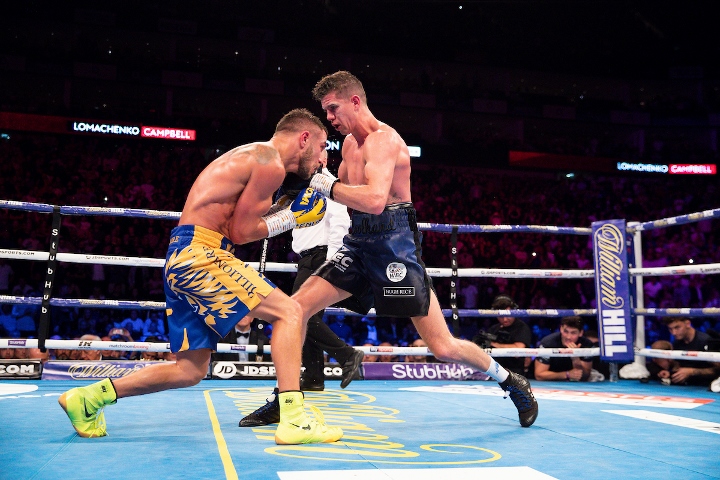 However, Hearn declared he was not entirely convinced by Lomachenko, who himself rated his display as a a seven-out-of-10 performance.

"A great effort [from Campbell]. I didn't have the gap anywhere near as wide as [the judges], I had Campbell losing by about four, five rounds max, I thought he boxed brilliantly, perhaps didn't go for gold enough," Hearn told iFL TV, according to Omnisport.

"I was slightly disappointed with Lomachenko, to be honest. We've built him up as this superstar, but I can't put him in the same category as the superstars of yesteryear on that performance.

"A great fighter, obviously, but we can't mention him in the same breath as some of the all-time greats yet.

"I wasn't particularly impressed. I thought he had Campbell hurt a few times, he didn't finish the job. I thought he coasted a few rounds, I didn't see him look the dynamic fighter we've built ourselves up to believe he is.

After Saturday's bout, Lomachenko outlined his intention to complete the set of major titles at lightweight, though Richard Commey's expected fight with Teofimo Lopez is likely to mean the 31-year-old has to wait for his chance to do so.

[QUOTE=apollocreed;20032940]Same here. I’m a fan of Loma, his achievements already are outstanding, but he’s not one of the GOAT’s. Would the likes of Duran, Chavez, even Moseley and De la Hoya at lightweight go twelve rounds with Campbell? I doubt…

[QUOTE=Squ□redCircle34;20033286]If you know you know When the fight happens, get your popcorn ready and a side of crow to eat![/QUOTE] I once thought I was going to bag Britney Spears one day and that didn't happen either lol

Still need to watch the fight

[QUOTE=PRINCEKOOL;20033020]I don't like making excuses, but I have come to this conclusion via 'Observing Lomachenko's fights' and being unaffected by large sections of the boxing community, who most likely line up to buy the new iPhone every-time a new one…

[QUOTE=Boxing Goat;20032941]Lmao! Based on what? Beating some cans? Just stop it[/QUOTE] If you know you know When the fight happens, get your popcorn ready and a side of crow to eat!