Barrios Knocks Down Roman Twice, Stops Him After Eight

The emerging junior welterweight contender displayed speed and power, knocked down Jose Roman twice and scored a technical knockout victory at Staples Center. Referee Gerard White ended their scheduled 10-round bout after the eighth round because Roman’s corner men told him their fighter couldn’t continue.

San Antonio’s Barrios, 23, upped his unblemished record to 22-0 and produced his 14th knockout. The 30-year-old Roman, of Garden Grove, California, lost by knockout for the first time in his 10-year pro career and slipped to 24-3-1 (16 KOs). 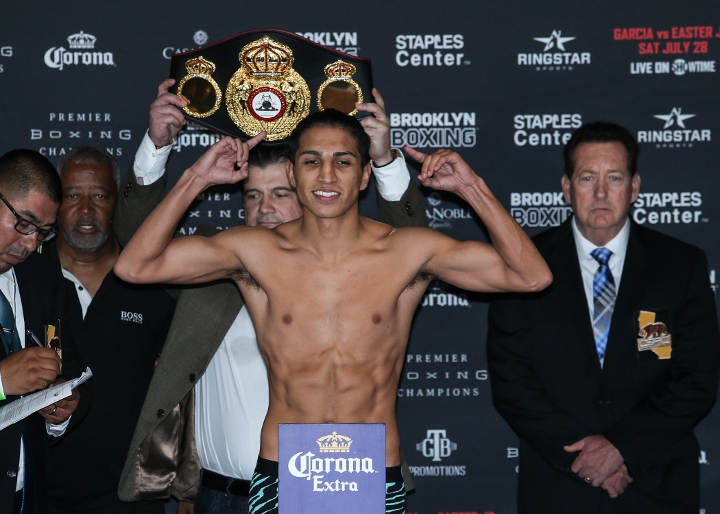 Barrios-Roman was part of the Mikey Garcia-Robert Easter Jr. undercard and the first of three fights broadcast by Showtime.

Barrios battered Roman with a barrage of punches that sent Roman to one knee in a neutral corner a minute and eight seconds into the eighth round. For the second time in their largely lopsided fight, Roman managed to get to his feet and make it to the next round.

Roman held and survived during much of the sixth and seventh rounds. Barrios hit him with several overhand rights and left hooks in the seventh round, but Roman remained on his feet.

After flooring Roman during the fourth round, Barrios spent much of the fifth round hammering his fading opponent with power punches that constantly kept Roman fighting off his back foot.

Barrios rocked Roman with a perfect overhand right to the chin at the 1:52 mark of the fourth round. Roman stumbled backward, into the ropes.

Barrios pursued him and landed two lefts, the second of which dropped Roman near a bottom rope. Roman got up, but Barrios hurt him with another right hand just before the fourth round ended.

Roman connected with a clean left hook to the jaw Barrios took well early in the third round.

Roman connected with an overhand right and a left hook in the last 20 seconds of the second round. Barrios and Roman approached each other with caution in the first round and neither fighter landed consequential shots in those three minutes.