NEW YORK – Louisa Hawton’s heart is about 11,000 miles away from Brooklyn, where she’ll partake Saturday night in the highest-profile fight of her boxing career.

As anxious as she is to showcase her skills on Showtime’s social media channels, Hawton can’t wait to return home to Perth, Australia, to spend the holidays with her children – 12-year-old Eli and 9-year-old Estelle. They’re the primary motivation for her spending so much time in the United States, where Hawton hopes to take advantage of this short window of opportunity while it’s open.

“It’s not easy being away from them and missing out on so much,” Hawton told BoxingScene.com. “It does make me emotional thinking about it, because I miss them and wanna be with them every day. But I’m just so drawn to do what I’m doing. How can this woman from Perth, with not much boxing history, get so far, so quickly, if it wasn’t meant to be in my tapestry?” 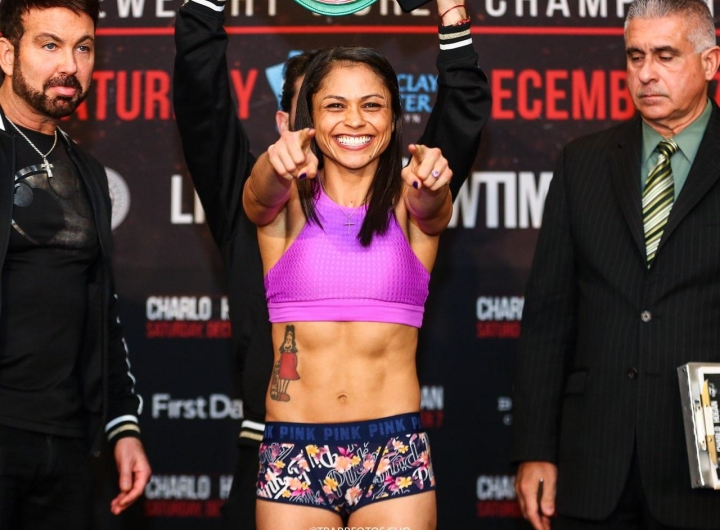 The 34-year-old Hawton, who answers to the nickname “Bang Bang Lulu,” expects another victory over Lorraine Villalobos to lead to bigger bouts in 2020. Hawton (9-2, 5 KOs) stopped Los Angeles’ Villalobos (4-2, 2 KOs) after five rounds in their 10-round title fight last December 8 at Dignity Health Sports Park in Carson, California.

Hawton will end almost exactly a one-year layoff by boxing Villalobos on the Jermall Charlo-Dennis Hogan undercard at Barclays Center in Brooklyn. Their rematch will be one of two bouts streamed on Showtime’s Facebook page and YouTube channel, starting at 6:30 p.m. ET/3:30 p.m. PT.

Hawton was supposed to box Brenda Flores in another rematch earlier this year, but Flores withdrew from both bouts. Mexico’s Flores (16-4-1, 4 KOs) scored a controversial, 10-round, split-decision win against Hawton in September 2018 at The Forum in Inglewood, California.

She knows, though, that the 23-year-old Villalobos is a capable opponent. They produced an excellent action fight a year ago, but it was stopped prior to the start of the sixth round.

“I’m really grateful and really excited,” Hawton said. “I’m super-psyched for it because this is the biggest platform I’ve boxed on. This is where I’ve been dreaming to be, envisioning to be, since I started boxing, since my first amateur fight. To be here, in New York, on the best platform, the best show, on PBC, as a woman, is pretty great.”

For Hawton, this fight marks the height of a journey that began late in 2012, when a friend took her to a kickboxing class in her hometown of Mandurah, Australia, just south of Perth. Hawton had three amateur kickboxing bouts and two amateur boxing matches before launching her professional boxing career in March 2014.

She now works with trainer/manager Elvis Grant at Freddie Roach’s Wild Card Boxing Club in Hollywood, California. Hawton has been mentored by Laila Ali, who has helped Hawton remain positive while navigating the additional challenges of succeeding as a woman in boxing.

However the rest of her career unfolds, Hawton is thankful that she went to that kickboxing class seven years ago.

“I’ve been through a lot in my life,” Hawton said. “I’ve been through a heavy depression, had some suicidal thoughts. So, all of those things I’ve overcome. At that point in my life, when I first walked into a gym, I guess I was looking for something that I felt that maybe I’d lost inside myself. It gave me that feeling back, that I’d arrived back home again, even though I didn’t know what I was doing.”

Though admittedly a work in progress, Hawton now knows what she’s doing. More than anything, she hopes the sacrifices she has made the past few years have inspired her children.

“I’m definitely here to create a better future for my children and to be able to give them the kind of lifestyle – nothing crazy, but something that they are proud of,” Hawton said. “I think one of the biggest things that I would really love to instill in my children is that anything’s possible, and if they have some kind of dream or some kind of desire that they can go after that, without worrying about what other people think. It’s all about what they wanna do, their own life and being able to create those things for themselves. If I can instill that by showing them the way, then the greatest gift is given.”