LAS VEGAS – If it were up to Bob Arum, he wouldn’t have come to MGM Grand this week to promote Tyson Fury’s fight against Otto Wallin.

“I need this fight like a hole in the head,” Arum told BoxingScene.com on Thursday. “That’s the truth.”

The 87-year-old Arum has nothing against Wallin, who at least looks the part of a credible contender and has been nothing but perfectly polite since this fight was made last month. And the ever-entertaining Fury makes Arum’s job easier, even against an unproven opponent completely unknown among American boxing fans.

It’s just that Arum much would’ve preferred Tyson Fury’s next fight to be a rematch with Deontay Wilder, who fought Fury to a split draw December 1 at Staples Center in Los Angeles.

Moving directly to Wilder-Fury II would’ve prevented Wilder from fighting Luis Ortiz in their own rematch November 23 at MGM Grand. Arum is much more confident in Fury defeating Wallin than he is about Wilder winning his second fight versus Ortiz.

Whereas Fury is a 25-1 favorite versus Wallin, Wilder willingly has decided to engage in a seemingly more troublesome rematch against Ortiz.

The Cuban-born Ortiz is 40 and Wilder knocked him out in the 10th round of their first fight 18 months ago at Barclays Center in Brooklyn. Assuming Fury (28-0-1, 20 KOs) gets past Sweden’s Wallin (20-0, 13 KOs, 1 NC) on Saturday night at T-Mobile Arena, Arum still won’t breathe a sigh of relief until Wilder withstands Ortiz’s second shot at his WBC heavyweight title in two months.

Fury’s promoter remembers Ortiz rocking Wilder late in the seventh round of their initial battle, before Wilder recovered, dropped Ortiz twice and stopped him in the 10th round. Arum also was stunned to see another fighter he once promoted, Andy Ruiz Jr., produce one of the biggest upsets in boxing history when he stopped previously unbeaten heavyweight champ Anthony Joshua three months ago.

If Ortiz (31-1, 26 KOs, 2 NC) can hurt Wilder (41-0-1, 40 KOs) again and finishes the job this time, the lucrative Wilder-Fury rematch clearly wouldn’t happen next. The thought of that transpiring will make Arum uneasy until the Wilder-Ortiz rematch ends.

“It’s very dangerous,” Arum said. “It’s stupid, but Al was boxed in. He had to do it. We talked about getting out of that fight, and doing Fury and Wilder here, now, in the fall. And Al couldn’t get out of that fight because Ortiz had been offered the Joshua fight, and so he promised him this [rematch with Wilder].” 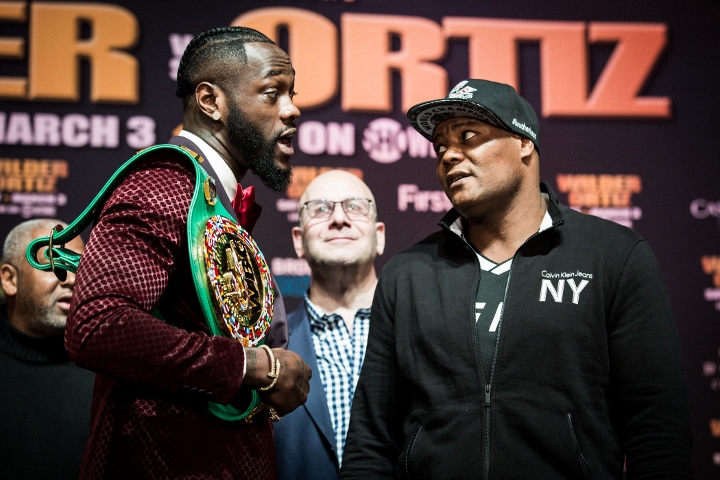 The notoriously reclusive Haymon, who advises Wilder and many other prominent boxers, and Arum met a few months ago to discuss putting together the Wilder-Fury rematch and the welterweight showdown between WBO champion Terence Crawford and IBF champ Errol Spence Jr. Arum made some inflammatory comments about Haymon that made working together appear unlikely, but Arum says their meeting went well and that he is confident they’ll be able to make at least some of the fights fans most want to watch.

Arum also understood why Haymon couldn’t help him make the Wilder-Fury rematch next.

Haymon promised Ortiz a rematch with Wilder if Ortiz turned down a $7 million purse to replace Jarrell Miller as Joshua’s opponent June 1 at Madison Square Garden. It isn’t clear how much money Ortiz has been guaranteed for his second fight with Wilder, but he’ll also receive a percentage of pay-per-view revenue from a fight Showtime is expected to distribute.

Their first fight was televised live on Showtime.

Most Internet sports books have installed Wilder as a 5-1 favorite over Ortiz, but “there is concern” about Wilder losing, according to Arum.

“And there’s concern about this Wallin,” Arum said. “He’s a 6-foot-6 Swede that can punch. I mean, any time heavyweights go in there, it’s not like the lighter weight classes, where people can absorb punches easier because they’re not really [dangerous]. All the heavyweight fights are dangerous. He gets hit on the beard and that it’s.”

Ben Davison, Fury’s trainer, commended Wilder on Thursday for taking a difficult fight he’ll have to win to advance to a second Fury fight.

“Listen, I’ve gotta give credit to Deontay Wilder,” Davison said, “because he fought Ortiz, he signed up to fight Tyson, took a massive risk. He signed up to fight Tyson again, taking a massive risk. And he’s taking a risk in boxing Ortiz, so I’ve got to give him credit where credit’s due. I think he will have learned a lot from the last fight with Ortiz. I think it’ll be tough for Ortiz to have improved from the last fight, physically. Just, you know, another hard fight, another hard training camp, at his age, it’s not exactly ideal. But Ortiz is a very good fighter as well, so it’ll be interesting to see.

Wilder explained during an interview with BoxingScene.com last week why he feels it’s necessary for him to oppose Ortiz again before facing Fury a second time.

“It was very important to me to set my legacy, to stake my claim in this heavyweight division,” Wilder said. “I’m not in the business of having low opposition. I’m the heavyweight champion of the world, man. And that means a lot to me. That says a lot for me. I’m just looking to have big fights. You know what I mean? I ain’t got time for these low-opposition guys. You know what I mean? Good luck on their opportunities, coming up, but right now, I’m at the top and I’m trying to unify the division. With that said, I must continue to fight the best of the best.”