Shakur Stevenson will make his debut at the junior lightweight limit when he opposes Puerto Rico’s Felix Caraballo on June 9 in Las Vegas.

Stevenson’s promoter wants him to wait, however, before deciding whether to vacate the WBO featherweight title. The 22-year-old southpaw told BoxingScene.com last month that he would relinquish his 126-pound crown if he couldn’t secure a title unification fight against England’s Josh Warrington next.

Warrington (30-0, 7 KOs) has repeatedly stated that he’ll face China’s Can Xu (18-2, 3 KOs) next in a unification fight for his IBF belt and Xu’s WBA championship. Nevertheless, Arum expressed optimism regarding making a Warrington-Stevenson fight if they continue to win.

“We don’t want him to give up the title until he’s sure which way he is going,” Arum told BoxingScene.com. “Because if there is a Warrington fight, which is a big fight, I think he would wanna stay at 126 to do that fight. But the only way that fight makes sense is to do it with a live audience in the UK, where you’d get 30,000 or 40,000 people watching that fight.

“Or even if you did it at the O2 [Arena in London], and you got 20,000 there to watch the fight, you’d have a large audience. Are we gonna be able to have live audiences in the UK before the end of the year? I mean, your guess is as good as mine. I’m not an expert on any of this stuff.” 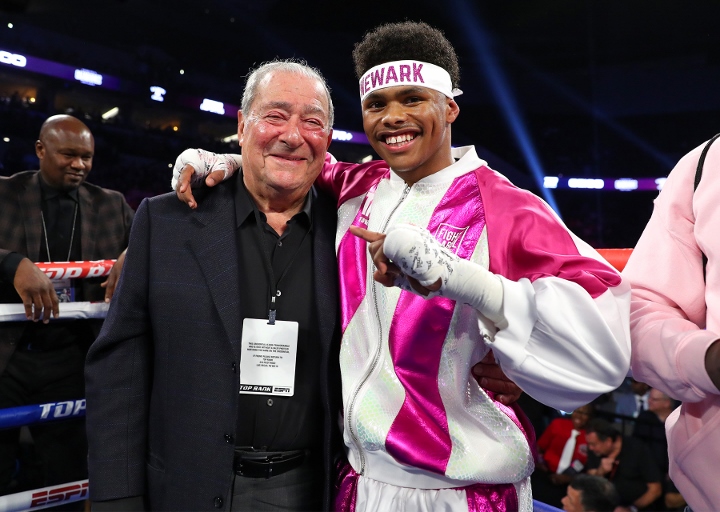 Warrington and Xu were expected to meet at Emerald Headingly Stadium, a cricket and rugby complex in Leeds, England, Warrington’s hometown. The date and site of their fight haven’t been announced due to the COVID-19 pandemic.

Stevenson hasn’t defended his WBO featherweight title since he won the then-vacant championship when he out-boxed Joet Gonzalez (23-1, 14 KOs) and won a 12-round unanimous decision October 26 in Reno, Nevada. The 2016 Olympic silver medalist was supposed to make his first title defense against Colombia’s Miguel Marriaga (29-3, 25 KOs) on March 14 at Madison Square Garden’s Hulu Theater, but the coronavirus crisis caused the cancelation of that card.

If the heavily favored Stevenson (13-0, 7 KOs) beats Caraballo (13-1-2, 9 KOs) and a fight with Warrington cannot be made, Arum’s Top Rank Inc. has a stacked stable of potential 130-pound opponents for the Newark, New Jersey, native.

“I think there are a lot of good guys that he can fight at 130,” Arum said. “You have [Jamel] Herring, you have [Miguel] Berchelt, you have [Oscar] Valdez. Sh*t, there’s a whole list of guys. [Carl] Frampton. So, you know, that decision will be made by the kid, by [co-manager] James Prince and by his grandfather [Wali Moses] and his trainer [Kay Koroma] – whether they’re gonna stay at 126 or go to 130. You start with a kid who has good habits and doesn’t pig out, but he’s growing. You have no control over the growth. When he started with us, he was a really young kid [19] who obviously was still growing.”

Shakur should be in jail. He got away from jail last time, but with his attitude and friends, jail is coming, just a matter of time.

"You start with a kid who has good habits and doesn’t pig out, but he’s growing. [B]You have no control over the growth.[/B] When he started with us, he was a really young kid [19] who obviously was still growing."…

I saw his fight with Joet Gonzales and i can say he is more boring than Mayweather. He punch without intention to hurt the opposite and keep on back foot. He think he still in amateur. Josh Warrington should ignore…

Boxing in a nutshell. Win a vacant belt against a pretender with a puffed up undefeated record. Then vacate without defending it. Sounds like a legit claim to be a world champion.

Stevenson needs to start trading more. His past fights have been boring as ****. No matter how much his brothas ward and bradley talk him up