The first controversy was related to Pacquiao's pre-fight shoulder injury and being refused a therapeutic shot on the night of the fight.

The second controversy was related to Mayweather being administered fluids with an IV in the aftermath of the weighin. 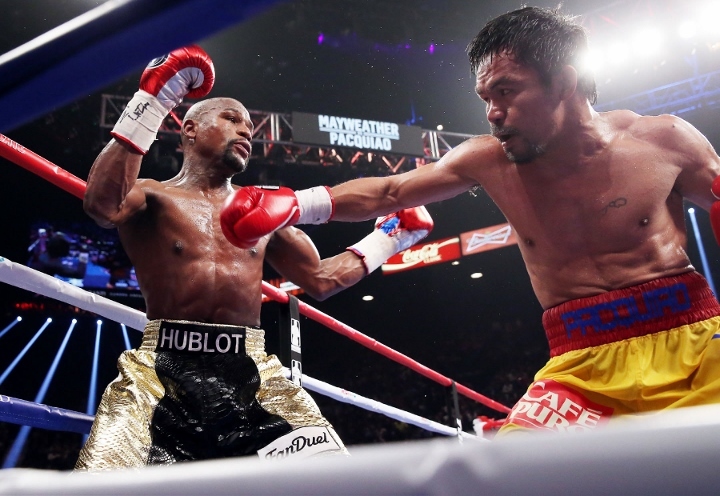 Arum, who promotes Pacquiao, blames the United States Anti Doping Agency [USADA] for all of the controversy that following that event.

"I really blame an organization that I know that you have no love for, for really causing the problem with that fight - and that is USADA," Arum stated on The Forward Podcast.

"Because as a condition for doing that fight, the Mayweather people made us use USADA. And when Manny hurt his shoulder... Manny had for many years a torn rotator cuff. That's not as dangerous as you think. A lot of major league pitchers have pitched with a torn rotator cuff. Manny's [injury] was about 50%, so in training he hurt it, so we immediately sent him to a big orthopedist. He does the Dodgers, the Clippers. And he and his staff, they have a protocol, and everything was checked in with USADA.

"And then the doctor said that they wanted, about three hours before the fight, to shoot something into the injury - in case it goes a little bad you don't feel it and its perfectly permissible. And we went to USADA and they absolutely agreed, and they signed off, and we were told that they were going to inform the Nevada State Athletic Commission.

"So the night of the fight, the doctor is in the dressing room and he's getting ready to shoot Manny's shoulder. The inspector is in there, for the commission, and we find out that the USADA people did not inform the Nevada Athletic Commission that they had approved this shot.

"So Manny went into the fight without taking that shot. [USADA] said they forgot. And then we find out later, that after the weighin.... the USADA people went back to where Mayweather was, just as they went back to where Pacquiao was, and they were giving Mayweather a shot, which is prohibited under WADA/USADA law, to rehydrate him and he needed no rehydrating. People say that shot is used to hide the use of performance enhancing drugs. They then gave him, three weeks after the fight, a TUE [Therapeutic Use Exemption].

"People say, why would [USADA} do such a thing? Well, we use an organization called VADA, which is approved by the Nevada Commission and they charge us. They are used for every fight, and they charge us $20,000 for the testing. Do you know what USADA charges? $100,000 to $150,000. And who pays that in boxing? Only Mayweather."

[QUOTE=ADP02;17085299]WESS and I have had our battles .... so what's your point? [/QUOTE] The point is you're a fool who can't accept your whorshipped meth head hero failed miserably. [QUOTE][QUOTE]You think that Allergies was what done in Floyd and you…

[QUOTE=travestyny;17079559]There was an investigation, foolio. You know, when the independent TUEC looked over the medical files for the TUE. You know, the same medical files that the other athletes didn't fill out because they didn't apply for a TUE, nor…

[QUOTE=Dosumpthin;17079625][B][U][B]You will never see the "[I][U]truth[/U][/I]".[/B] No matter how many times you've been proven wrong - you keep spamming threads with unrelated illogical misnformed opinionated bias second hand misinformed propaganda. Still haven't answer my question: was arum lying about the…