LAS VEGAS – Bob Arum was at a party on Super Bowl Sunday, surrounded by about 80 people.

When the first of two commercials promoting the Deontay Wilder-Tyson Fury rematch aired during the Chiefs-49ers game, partygoers began looking at Arum. No one had ever seen a boxing commercial during the most-watched annual sporting event in the United States.

“They were like, ‘Hey, you’ve got a real sport! This is major league,’ ” Arum recalled. “And it’s true. The message out there now is boxing is back and it’s a major-league sport.”

Boxing still doesn’t occupy prime real estate on a crowded American sports landscape that prominently displays the NFL and, to lesser extents, the NBA and Major League Baseball. Nevertheless, there at least is widespread awareness of Wilder-Fury II due to an unprecedented promotional push from one of the country’s four major broadcast networks (FOX) and its second most-watched cable channel (ESPN).

In addition to two Super Bowl commercials that were watched by more than 100 million people apiece, FOX and ESPN have done countless cross promotions during broadcasts of other sporting events and spent tens of millions of dollars each to market a highly anticipated heavyweight championship rematch those networks will co-distribute Saturday night from MGM Grand Garden Arena.

“People are talking about this fight all over the country,” Arum said. “And one of the big topics is how ESPN and FOX are promoting it. … Nobody’s ever seen anything like it. I mean, I’ve been around since the first Super Bowl. There’s never been a commercial for a boxing match in any Super Bowl – ever.”

Arum’s company, Top Rank Inc., is Fury’s co-promoter. Top Rank has an exclusive content partnership with ESPN, which has 83 million subscribers in the United States.

Wilder is advised by Al Haymon, who has broadcast deals with FOX and Showtime to televise his Premier Boxing Champions series. FOX is available in approximately 120 million American homes.

The way those networks have teamed to market the Wilder-Fury rematch has convinced Arum that the event has a legitimate chance to generate two million pay-per-view buys.

“I really believed when I found out early on, before we even had an announcement, how FOX and ESPN were gonna do this, that’s why I predicted two million,” Arum explained. “Now to predict two million, if this was back in the old HBO and Showtime days, that would’ve been crazy. But because of those two networks, I always thought we had a shot to equal or exceed two million buys. And I’m now, more than ever, confident.” 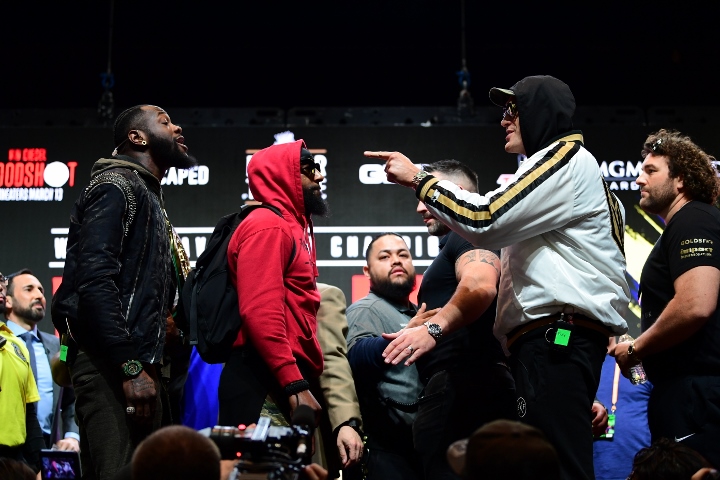 The first bout between Wilder and Fury delivered 300,000 buys, but that fight was distributed solely by Showtime in December 2018. Showtime has distributed the top three pay-per-view events in boxing history, each of which involved Mayweather, and is owned by Viacom/CBS.

That 12-round bout, which resulted in a controversial split draw, benefited from some marketing exposure to CBS’ massive audiences during NFL and college football broadcasts in the fall of 2018. But Fury had fought only twice, both times against huge underdogs in Sefer Seferi and Francesco Pianeta, in the three years before he challenged Alabama’s Wilder for his WBC title 14 months ago at Staples Center in Los Angeles.

Despite his unanimous-decision upset of long-reigning champion Wladimir Klitschko in November 2015, many consumers remained skeptical of Fury following a 2½-year layoff during which the unbeaten Brit battled alcoholism, cocaine addiction and depression.

Now, however, Fury has been exposed to mainstream American sports fans over the past year through his affiliation with ESPN. The widely disputed result of their first fight, as well the way Fury incredibly rose from a vicious knockdown with 2:21 to go in it, also has increased interest in their second fight.

Wilder, 34, and Fury, 31, have more than done their part promoting the event by participating in countless television, radio, newspaper, website and YouTube interviews over the past several months.

The fact remains, though, that neither fighter has headlined a pay-per-view event that has generated more than 300,000 buys in the U.S. Wilder’s last fight – a seventh-round knockout of Luis Ortiz in their November 23 rematch at MGM Grand Garden Arena – accounted for somewhere between 250,000 and 275,000 buys.

Piracy will impact the buy rate, too, perhaps more than usual because it costs $79.99 to watch Wilder-Fury II in HD.

Based on the enormous amount of financial resources FOX and ESPN budgeted to promote their rematch, it is believed that Wilder-Fury II will need to generate somewhere between 1.1 and 1.2 million buys for the networks just to break even. Though their Nevada State Athletic Commission contracts state that Wilder and Fury are guaranteed to earn $5 million apiece, the actual guarantees for both boxers are believed to be at least $20 million.

The loser is contractually guaranteed a third fight that is supposed to take place by August, regardless of the outcome of their rematch Saturday night. That applies plenty of pressure not only on Wilder and Fury to deliver another memorable bout worthy of completing a trilogy, but for the event to be a financial success, primarily from a pay-per-view standpoint.

Arum, whose company has invested a lot of time and resources into building Fury’s profile in the U.S., admits he’s nervous.

“Am I anxious about how it’s gonna do?,” Arum asked. “Of course. I’m a businessperson. But I’m saying all the groundwork has been so great, thanks to these two networks and the example that they showed.”

Not even half what Arum predicted. Fight lost money will struggle to break even Sources: The rematch between Deontay Wilder and Tyson Fury generated in the neighborhood of approxmately 800,000 to 850,000 pay-per-view buys in North America.…

[QUOTE=World Champion;20403757]I don't really understand what the enormous financial resources would be. Fox and ESPN devoted an incredible amount of airtime to promoting the fight, discussing the fight, airing shoulder programming for the fight, etc. The idea that they need…

This fight ain't doing 2 million PPV buys. I don't care if they had a Superbowl commercial. Me personally I'm excited about the fight happening and i cant wait to see Wilder and Fury fight. But I just don't see…

[QUOTE=deathofaclown;20404660]Yeah but Canelo is meant to be the face of boxing, so his standard of what is considered a success or failure is a different level to others Fury and Wilder are well known but neither considered the real facts…

[QUOTE=wileyhemi;20404984]they can't sell the time they use for promotion to advertisers.[/QUOTE] They wouldn't be able to sell it to advertisers anyway. Ad inventory and promotional inventory are two different things. If Fox didn't air commercials for the fight during the…