Arum: Miller Failed Test For 1 Of Same 3 Substances As Before The Joshua Fight

Just when Bob Arum assumed he had seen it all during his 50-plus years in boxing, along came Jarrell Miller.

The 88-year-old promoter was “astounded” to learn Saturday that Miller tested positive recently for one of the same performance-enhancing drugs that cost him a shot at Anthony Joshua’s four heavyweight titles and a compensation package in excess of $6 million last year. Bob Bennett, the executive director of the Nevada State Athletic Commission, informed Arum, whose company promotes Miller, on Saturday that Miller would be temporarily suspended Monday and wouldn’t be allowed to fight Jerry Forrest in what was supposed to be an ESPN main event July 9 in Las Vegas.

“I talked to Bennett, and he said, yes, they have a positive test for Miller and they’re gonna suspend him temporarily on Monday,” Arum told BoxingScene.com. “He’s off July 9th. We’re putting another heavyweight match in that the boys are finalizing now. And, you know, we’re gonna be completely guided by the Nevada commission. If, in fact, which I believe to be the case, that this kid tested positive apparently for the same thing that kept him from going through with the fight with Joshua, the same substance, he absolutely has gotta be out of his mind. But again, we’re getting everything second hand and we’re gonna be guided by the commission. And that’s that. What else are we gonna say?” 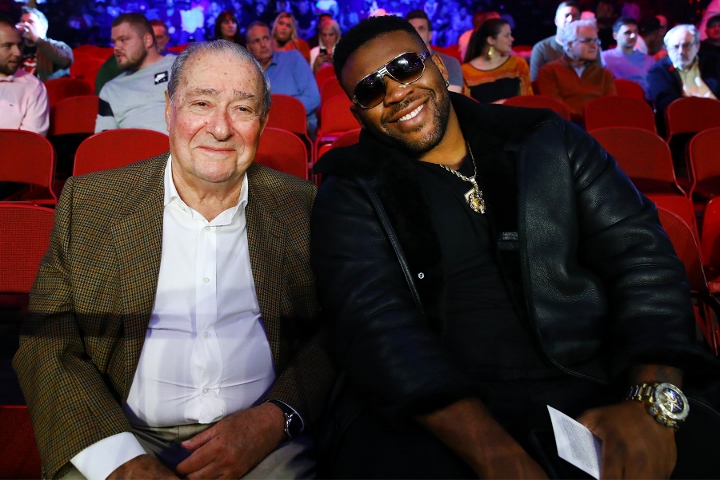 Miller tested positive for three banned substances – GW501516, also known as cardarine and endurobol, human growth hormone and erythropoietin, also known as EPO – in March 2019, two-plus months before he was scheduled to challenge England’s Joshua on June 1, 2019, at Madison Square Garden in New York. Arum didn’t specify which of those three substances was the one for which Miller tested positive again.

Top Rank announced late in January that it had signed the 31-year-old Miller (23-0-1, 20 KOs) to a multi-fight contract. Brooklyn’s Miller also signed with prominent manager James Prince after costing himself the career-high payday he would’ve made for fighting Joshua.

“We’re disappointed,” Arum said. “Our friend, James Prince, who signed him and advanced him money, he’s disappointed. I talked to James. We’re all disappointed because this isn’t a guy who contracted coronavirus. This is a guy who apparently used the same substance that he used before when he couldn’t go through with the Joshua fight. Listen, it is what it is.”

Meanwhile, BoxingScene.com has learned that Forrest (26-3, 20 KOs), of Newport News, Virginia, likely will face Cameroon’s Carlos Takam (38-5-1, 28 KOs) in ESPN’s main event July 9 at MGM Grand Conference Center. The Takam-Forrest fight was not finalized as of Saturday afternoon, though.

[QUOTE=tokon;20633304]Fury has not failed any drug tests but what extensive testing has he had? He wasn't required to complete any mandatory testing program despite being banned for 2years after testing positive for steroids. He didn't apply for a British boxing…

Gw1516 is the most hardcore of all those drugs it seems "GW501516 (also known as GW-501,516, GW1516, was entered into clinical development as a drug candidate for metabolic diseases and cardiovascular diseases, and was abandoned in 2007 because animal testing…

[QUOTE=tokon;20633304]Fury has not failed any drug tests but what extensive testing has he had? He wasn't required to complete any mandatory testing program despite being banned for 2years after testing positive for steroids. He didn't apply for a British boxing…

[QUOTE=chicken-;20631724]Fury has been extensively tested since then and has failed 0 tests. [/QUOTE] Fury has not failed any drug tests but what extensive testing has he had? He wasn't required to complete any mandatory testing program despite being banned for…

Prince is a f@ckin idiot for fronting this cheating ass loser money. What a waste. If I were a HW, I would be furious with this guy & want him out of boxing.