Arum: Lomachenko Will Return 8/25 at The Forum; Opponent TBD

NEW YORK – Bob Arum knows when and where Vasiliy Lomachenko will fight next.

All that’s left for Lomachenko’s promoter is to sit down with the newly crowned WBA world lightweight champion to choose his opponent. Arum confirmed following Lomachenko’s 10th-round technical knockout of Jorge Linares on Saturday night at Madison Square Garden that the three-division champion will fight again August 25 at The Forum in Inglewood, California.

“Definitely, we’re going to L.A.,” Arum said. “[Lomachenko] told me August 25 is good. So that’s the date, in L.A. Who he’s gonna fight, I don’t know. They said Lomachenko said he’s gonna stay at 135, so we’ll see. Any time I really discussed anything in the future with him, he said, ‘I really wanna concentrate on this fight.’ So I really don’t know.” 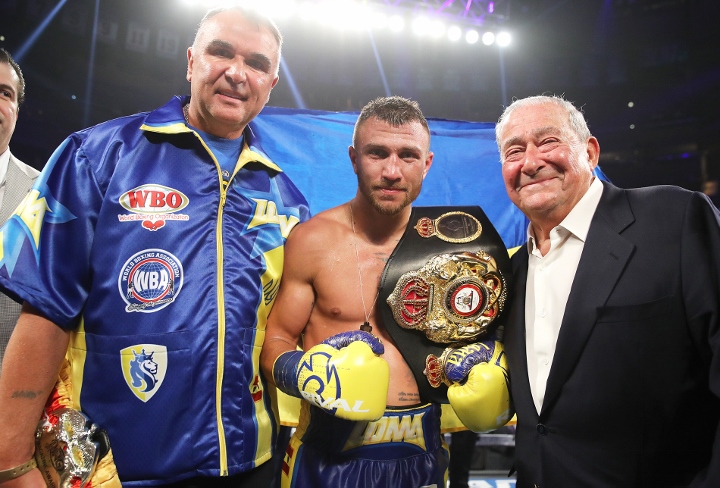 “That’s possible,” Arum said, “but again, I haven’t discussed that with the Lomachenko people.”

The 30-year-old Lomachenko (11-1, 9 KOs) also could return to the super featherweight division to defend his WBO 130-pound crown for the fifth time. The WBO has given the Ukrainian southpaw 10 days to determine whether he’ll remain at lightweight or move back down to super featherweight.

Gervonta Davis is Lomachenko’s most attractive option at 130 pounds.

Floyd Mayweather Jr., Davis’ promoter, changed his mind recently regarding a Lomachenko-Davis clash and now is willing to match Baltimore’s Davis (20-0, 19 KOs) against Lomachenko. Mayweather went as far as to call Top Rank president Todd duBoef last month to discuss putting together a Lomachenko-Davis bout next.

[QUOTE=Raonic;18768472]I doubt that is the fight in August but I can see Loma vs Beltran in August then Loma vs Manny in November.[/QUOTE] Arum will prob set it up in the near future.. Id say its even PPV worthy after…

No longer on this date?

[QUOTE=chimichanga2;18768350]I don't know how I feel about Loma-Pac at 135. I'd like to see Loma win the WBO belt in August and go for Mikey in Nov-Dec. But people on this forum think Loma-Mikey is at least 2-3 years away…

Now that Loma has tasted the canvas do you believe he'll be less ****y against these bigger fighters?