Arum: Judge Who Had Hart Over Smith Should Be Banned

ATLANTIC CITY – Bob Arum has a close relationship with Jesse Hart, who has been promoted by Arum’s company throughout his pro career.

Even Arum couldn’t believe one of the judges scored Hart the winner of his 10-round fight against Joe Smith Jr. on Saturday night. Arum tore into judge James Kinney after Kinney strangely scored Hart a 95-94 victor over Smith in a main event ESPN televised from Hard Rock Hotel & Casino’s Etess Arena.

“That judge should be banned from ever scoring a fight,” Arum said. “He should be investigated and banned. And I promote Hart! I mean, sh-t, how can you ever score that fight for Jesse Hart? I mean, it’s not even an argument.” 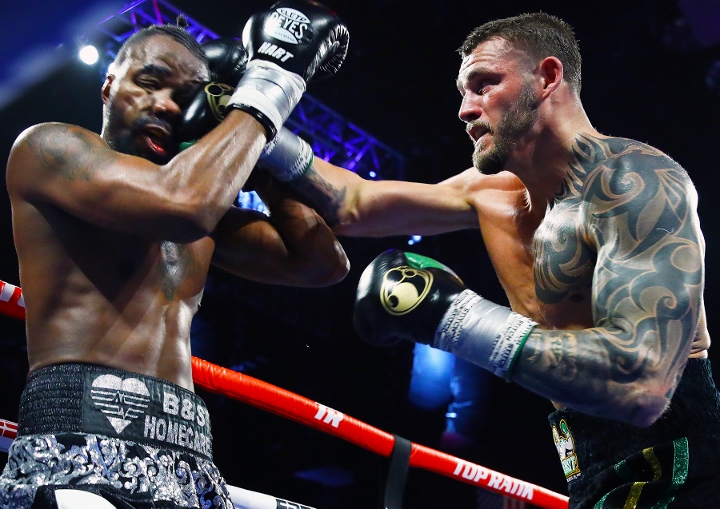 Kinney scored six of the 10 rounds for Hart, but he was overruled by judges Eugene Grant and Joe Pasquale. Grant (97-92) and Pasquale (98-91) scored seven and eight rounds, respectively, for Smith, who dropped Hart in the seventh round and was the aggressor throughout their bout.

Philadelphia’s Hart (26-3, 21 KOs) spent much of a fight Smith clearly won moving away from the hard-hitting Smith and holding him. Hart showed toughness by making it to the final bell and avoiding the first knockout defeat of his career, but he even acknowledged afterward that Smith (25-3, 20 KOs) deserved to win.

“It was a terrific fight, a real good fight,” said Arum, whose company, Top Rank, now co-promotes Smith. “A fight like that is good for boxing because it’s an action fight. And then you have a god-damn judge who screws it all up. I mean, that’s horrible. I mean, one guy scores it [98-91], the other [97-92]. That’s what it was.”

Smith knew he had beaten Hart, but the Mastic, New York, native admitted he got nervous when ring announcer Jimmy Lennon Jr. stated before revealing the scores that the result was a split decision.

“I was a little worried there,” Smith said. “I was very confident I was gonna get the decision. But the one judge made me a little nervous in there. But you know, just with the knockdown and the hard shots that I landed, I deserved it.”

The 63-year-old Kinney, of Woodbridge, New Jersey, began judging professional boxing in January 2015. He has worked fights in New Jersey, New York and Pennsylvania over the past five years.

You boys don't know what you're looking at. That there is the new AJ school of boxing. Hart just didn't have a 20 foot ring to work with.

[QUOTE=The D3vil;20320714]Best sport in the world Worst judges, worst sanctioning bodies, worst promoters[/QUOTE] If I could green k you i absolutely would! Fantastic and agreeable post!

Not an Arum fan, but he's right. Lame judge who needs to be banned from boxing permanently. No excuse for that ignorant b.s.

[QUOTE=ShoulderRoll;20320598]Hart is a Top Rank fighter. Arum probably had that judge on the payroll and is now trying to deflect any suspicion. :lol1:[/QUOTE] This. I don't agree with a lot of things you say but this certainly seems like Bob…