Arum: If I Were Canelo - I Would Tell Golovkin To Screw Himself!

Canelo and Golovkin fought to a controversial draw back in September of 2017 at the T-Mobile Arena in Las Vegas. A year later at the same venue, Canelo won a close twelve round majority decision over Golovkin.

Golovkin has continuously called for a third showdown, but Canelo has refused to entertain the bout. 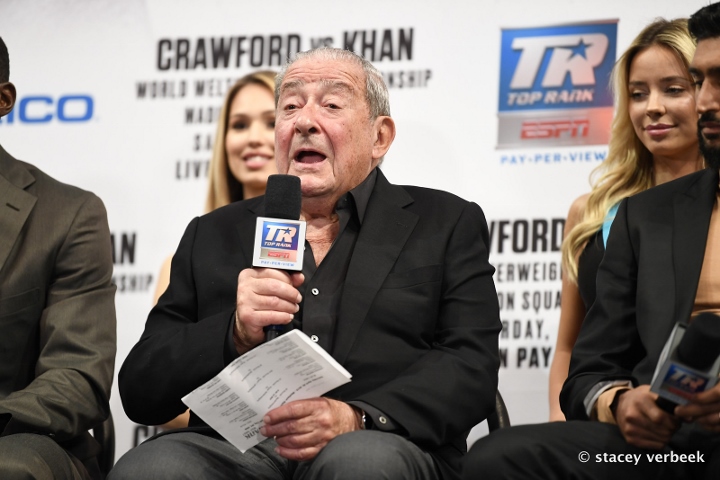 Last year, Canelo signed a massive multi-year contract with streaming service DAZN. And then earlier this year, Golovkin signed on with DAZN - and GGG's decision was influenced by the possibility of facing Canelo again.

DAZN made every attempt to push for the fight to take place next month, during Mexican Independence Day weekend, but Canelo had no interest in the scenario and delayed his next fight to a later part of the year.

Arum believes Canelo did the right thing in rejecting the trilogy.

Canelo was initially scheduled to face Golovkin for a second time in May of that year. The fight was called off when Canelo tested positive for the banned substance clenbuterol.

Canelo, who claimed that his positive test was the direct result of food contamination, was suspended for six months by the Nevada State Athletic Commission.

When the positive test came down, Golovkin verbally erupted in Canelo's direction - alleging that the Mexican star may have used performance enhancing drugs in the lead-up to their first bout. GGG also claimed to have had photos which allegedly displayed needle marks on Canelo's stomach and body. And Golovkin consistently shot down Canelo's explanation for the positive test results.

Canelo took all of Golovkin's statements personal. And Arum states that Canelo has every right to feel that way.

“If I were Canelo sitting where Canelo is, I would tell GGG to go screw himself, and never fight him, because of what GGG did with that drug thing. What he said about Canelo is unconscionable, and I really give Canelo a lot of props for telling GGG, ‘go screw yourself.’ Even if it’s a lot of money, ‘go screw yourself,'” Arum said to Fight Hub.

If WBO light heavyweight champion Sergey Kovalev defeats Anthony Yarde on Saturday, there is a good chance that he might face Canelo on a date in November.

"The hope is that Kovalev wins and comes through, and they’ll do the Canelo fight with Kovalev, which is a tremendous fight for November. Two weight classes [Canelo will be move up to face Kovalev]. That’s why it’s such a good fight because it’s so competitive, and you’ve got to admire Canelo’s balls for doing it,” Arum said.

[QUOTE=_Rexy_;20001860]He’s no different from any other promoter. They’re all scum. First thing I thought of when I read this headline was “who does Arum have at 160-168 that he wants to butter Canelo up for?” Bob always has an ulterior…

[QUOTE=Nay_Sayer;20006767]Middleweight is anything above 154 with a limit of 160, Einstein. [B]FACTS[/B]. Learn to live with them...[/QUOTE] yup. 160 limit. but when you hold the belt hostage and refuse to defend it against anyone unless the contractual weight limit is…