The first fight of that agreement takes place on June 15th, at the MGM Grand in Las Vegas. Fury will face huge underdog Tom Schwarz. 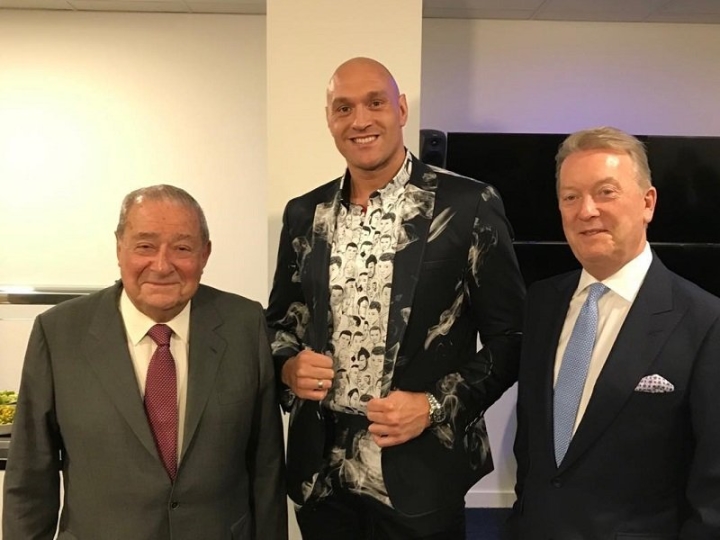 The deal was risky, because Fury was on the verge of finalizing an agreement for a rematch with WBC world champion Deontay Wilder.

Arum believes Fury will be the undisputed champion in 2020.

A hard task to accomplish, considering Fury is contractually tied to ESPN and BT Sport, Wilder is tied to Fox Sports and Showtime, and unified champion Anthony Joshua is linked in with DAZN and Sky Sports.

"When I met with Tyson I realised he will mesmerise the US market, he has the ability that will care of itself... (but) as a personality he is going to take the US by storm," Arum said to Daily Mail.

"He will booked on our late night shows on ABC with Jimmy Kimmel... (we're) not satisfied making an impact with boxing or sports fans, we want the public at large to know him, to take care for him, listen to his story. I think he can be the most famous athlete in the world, that's our goal. A year from now he will be the undisputed heavyweight champion of the world and not only that, when people say who are the greatest sportsmen in the world he will be, if not No 1, in the top 3.

"I started with Ali... later on I had Marvin Hagler, Ray Leonard, Oscar De La Hoya, Pacquiao, Mayweather and George Foreman and in talking with Tyson I realised that we could do for him what we did for George Foreman - he had great career, had 10 years off, came back and he set the world one fire, the boxing world, sports world. Not only with ability but with his charisma, he became larger than life."

[QUOTE=Bobby Shaw;19740313]Once you see Warren on the scene just say good buy to good fights. I think Ricky Hatton fought 40 bums before running away to have competitive fights. Joe Calzaghe never fought anyone with a pulse his whole career…

[QUOTE=Motorcity Cobra;19740185]It's on PPV in the UK[/QUOTE] yeah but that don't mean he's a ppv star, he ain't selling like Mayweather,or Canelo or Joshua , he's too boring in the ring

[QUOTE=tonysoprano;19740329]Nobody will buy it either. It shouldn't even be an undercard fight on a PPV let alone a main event.[/QUOTE] 🗣️ Asked Frank Warren about criticism of Fury vs Schwarz being on PPV: “Tyson’s certainly in the…