Bob Arum expects Teofimo Lopez to face George Kambosos in his next fight.

“Tell me when the pandemic is over,” Arum replied when asked when Lopez-Kambosos could be scheduled. “Right now, the money looks like it’s lined up for that fight, that would enable us to put that fight on in Australia. But, you know, you can’t really get into Australia now. At a minimum, you’ve gotta do a 14-day quarantine, and that’s not a bullsh-t American quarantine. You’ve gotta go to a government hotel and stay there for 14 days.” 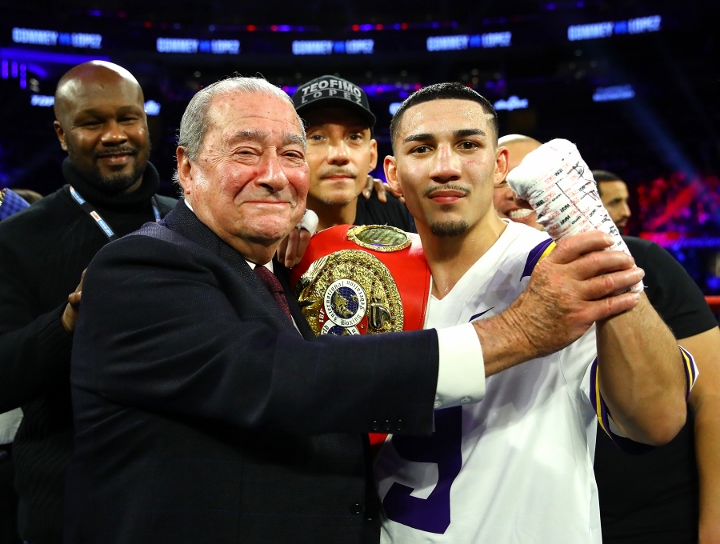 Another complication, according to Arum, is that the Australian government would provide some financial backing to bring the Lopez-Kambosos bout to a stadium either in Sydney or Melbourne.

“We’re looking to do that fight with government support,” Arum explained. “The Australian government is trying not to attract tourists, but to keep out tourists at this point, until the pandemic is over worldwide, because Australia has managed the pandemic extraordinarily well and they have very few cases. And they don’t want us foreigners to come in to contaminate them.”

The 27-year-old Kambosos (19-0, 10 KOs) was born and raised in Sydney, Australia’s most populous city. Kambosos became the IBF’s mandatory challenger for one of Lopez’s four lightweight titles by defeating Wales’ Lee Selby (28-3, 9 KOs) by split decision in their 12-round elimination match October 31 at Wembley Arena in London.

The 23-year-old Lopez (16-0, 12 KOs) is a Brooklyn native who relocated last year to Jonesboro, Arkansas. He is more than willing to travel halfway around the world to defend the titles he won from Vasiliy Lomachenko on October 17, but Lopez expects to be well-compensated for facing Kambosos in his challenger’s home country.

[QUOTE=Motorcity Cobra;21015682]Your problem, like America's, is you aren't strictly enforcing the rules and provinces are doing their own thing. Ontario's lockdown measures aren't the same as Quebec's. You can drive from one province to another and you aren't quarantined. Thailand…

[QUOTE=_Rexy_;21015612]Canada does 14 day mandatory quarantine for everyone who enters the country also. We do all the **** you claim, and are currently under lockdown. 6200 cases yesterday. 675,000 in total. Population smaller than California.[/QUOTE] I live in Canada and…

Lopez is asking too much fo the fight wont happend...

Australia is like the fake Dubai offers that Arum talks about from time to time. Never believed a word of that. Lopez will be running back to Arum for a fight soon and be told what he's exactly worth. What's…