Promoter Bob Arum is ready for boxing to resume. He is ready to head home to Las Vegas, ready to re-open the doors of his Top Rank office building and ready to take his seat at ringside after spending the past two months with his wife, Lovee, observing stay-at-home rules at their second home in Beverly Hills, California.

While Arum, who has even grown a goatee for the first time, said he has enjoyed the time binge-watching shows on Netflix, Amazon Prime and Hulu – and getting recommendations from British promoter Frank Warren on what to watch – he is ready for boxing again.

“You work during the day, you take calls, you do interviews, you plan getting back into action and then instead of going out it’s, ‘What do we have to watch tonight,’” Arum said on Wednesday, noting that the favorite show he streamed while cooped up was a recommendation from Warren --  the British series “Prime Suspect.” 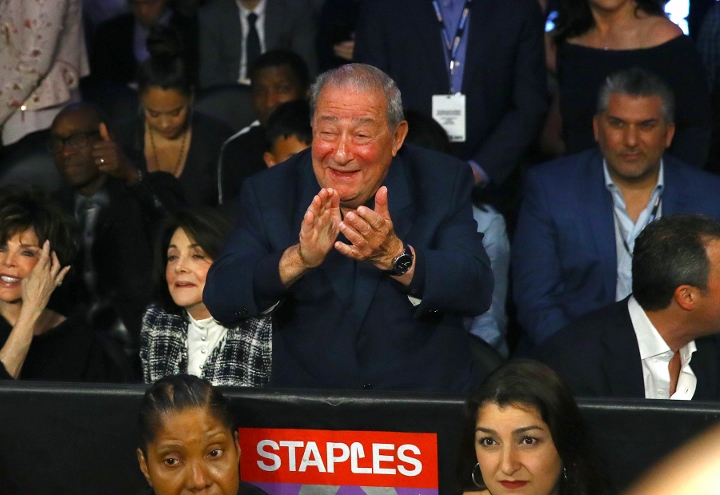 But all of that time in front of the television is about to come to an end for Arum because he and his staff are working feverishly to put the final touches on a plan that will see the company resume fight cards on June 9. It will be the first boxing event – headlined by featherweight world titlist Shakur Stevenson in a nontitle bout at junior lightweight against an opponent to be named -- in the United States since the coronavirus pandemic shut down the country in mid-March, just days before Stevenson was supposed to headline in a title defense on ESPN against Miguel Marriaga in New York.

Arum’s ambitious plan, with the support of broadcast partner ESPN, will see Top Rank put on three shows per week beginning in the second week of June and two shows per week in July. They will take place at a location to be announced inside the MGM Grand in Las Vegas without spectators but with television cameras on hand to bring the action to viewers on ESPN or ESPN+. It is also possible that some events could move to other locations in Las Vegas, according to Top Rank.

Even though Arum is 88 years old, meaning he is part of the demographic that has been at the greatest risk to contract Covid-19, the respiratory disease caused by the coronavirus, he said he definitely plans to be at his events despite some believing that it would be safer for him if he stayed away. But Arum won’t hear any of that.

“Absolutely,” Arum said when asked if he would attend the Top Rank cards. “I wouldn’t allow an event to go on if I didn’t feel that it was completely safe, and it would be terrible if I said that the thing was completely safe and then I didn’t attend it myself. Of course, I’ll be there.”

To that end, he said he has tested negative for the coronavirus and is making plans to leave Beverly Hills and return to his main residence in Las Vegas.

“We’ll be going back to Vegas next Tuesday, day after Memorial Day,” Arum said. “We’re opening our offices on June 1st and I will be there for the opening of the office having taken all of the necessary tests to show that I am coronavirus free, and that’s what we’re working on now. And I know my office will be open on June 1st and our first event in Nevada will take place on the 9th of June.

Arum said his wife has also been tested for the coronavirus and is negative.

“As late as this week (she was tested) and she tested negative for it,” Arum said.

Arum said there are still details that need to be handled to get the upcoming shows squared away, including the official fight lineups and that the Nevada State Athletic Commission still needs to adopt the guidelines and testing protocols promoters will be required to implement in order to put on an event, which likely will be limited to four or five bouts per card in order to reduce the number of people that need to be at each show.

Because of the coronavirus pandemic, the Nevada commission has not held a meeting since it suspended combat sports in the state in mid-March. But it announced on Thursday that it will hold its next meeting on March 27 to adopt the rules that will govern combat sports in the coronavirus era, although commissioners, others involved and members of the public interested in the proceedings will have to attend via telephone instead of the usual in-person meetings the commission holds monthly in an office building in Las Vegas.

Besides a hearing on the protocols for the events without a live audience, there are three date requests on the agenda for the meeting. One is for a UFC event to be held May 30 at the UFC Apex arena in Las Vegas and the other two are for Top Rank cards at the MGM Grand on June 9 and June 11.

Arum said he thought the rules and regulations would be adopted without much issue, which will officially allow for the return of boxing in Nevada.

“I’m absolutely confident,” Arum said in regards to the June 9 card taking place. “We’re waiting for the appropriate time to release (the details). A lot of it has to do with ESPN. They feel, and rightly so, they are against leaking any of it to the press until they decide they want to make an announcement on their ESPN programming. They’re paying the freight and they have absolutely the right, the absolute right, to tell us when and how this should be released to get the most out of it from their standpoint. So I respect that completely.”

RIP Bob when his greedy and power-hungry ass catches the Rona. These money-changers can't go one day without having to be in power and making money. Bob retire. Let the young guys run things.

2 to 3 shows a week sounds ambitious. Hope they can make some notable fights here & there + ideally competitive fights if they can't make anything notable.