Long before the first fight of the night for UFC 249 hit the TV screen, Bob Arum already had a clear vision on how things will—or hope to—go for Top Rank’s first post-pandemic boxing show.

The Hall of Fame promoter paid attention, nevertheless, in part because it’s his job but also since the show this Saturday was the first major sporting event in the United States since mid-March.

“As a first step, it wasn’t bad,” Arum told BoxingScene.com of the measures taken for last Saturday’s ESPN Pay-Per-View event, which aired live behind closed doors from VyStar Veterans Memorial Arena in Jacksonville, Florida. “They were the first ones to come back (with a major sporting event in the United States), and with that will come certain mistakes.

“It wouldn’t be fair to criticize with it being the first one out the box, nor am I her to criticize them. As they do more shows, especially once they come back to Las Vegas, they will adhere to their policies and it will be a lot better. It will look more like ours.” 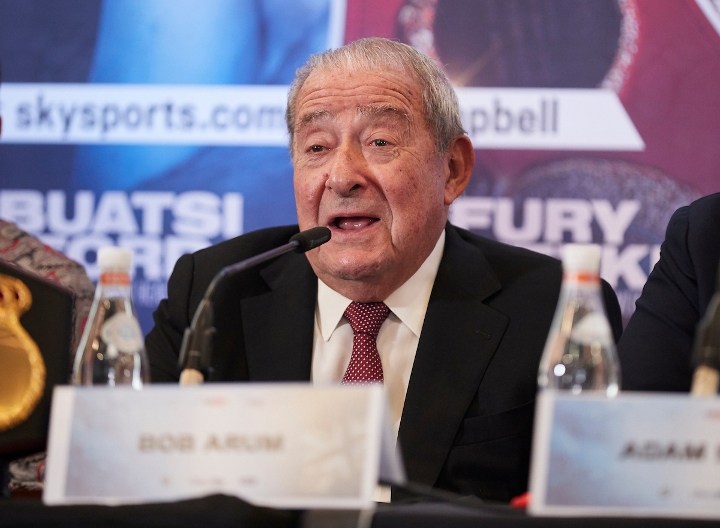 All participants on UFC 249 were tested for coronavirus disease (COVID-19), with one fight being pulled from the show after Brazilian middleweight Ronaldo ‘Jacaré’ Souza tested positive along with two of his cornermen. The fallout resulted in the show becoming a 11-fight card which aired live over three separate telecasts—early prelims on UFC Fight Pass, followed by a four-fight lead-in undercard on ESPN and ESPN+ which peaked at 1.592 million viewers in the final 15 minutes leading into the five fight PPV card.

UFC will have two more shows take place at the same Jacksonville location this week before heading to its APEX training facility in Las Vegas for UFC Fight Night 175, which takes place May 23 live on ESPN+. Soon thereafter will come Top Rank’s—and boxing’s—triumphant return to a stateside venue, with plans to begin staging events in early June and steadily throughout the summer without fans in attendance.

Whereas last Saturday’s UFC card along with the two taking place this Wednesday and Saturday will all carry 11 fights each (UFC 249 originally due to stage 12 fights), Top Rank’s shows will be far more intimate. With only four fights per show—which will air live on an ESPN platform—health risks will be minimized until they can be eliminated altogether.

“We knew all along what UFC’s plans were for these shows,” notes Arum. “Ours is better, and there's was never going to determine how we handle our shows. There’s will be as good as ours once they start doing shows in Las Vegas. The Nevada officials have come up with a very good plan, and we’ve been working with a coronavirus task force in state along with (Nevada State Athletic Commission executive director) Bob Bennett and the MGM hotels, which will make a facility available for us.

“What happened on Saturday (with Souza’s COVID-positive test being learned the day before fight night), will never happen at our shows. It will be detected before they even get in the facility. That has to be done and will be done. We’re talking about four fights to start out—the fewer fights you have, the better you can control things.”

I am curious how unique and safety Bob Arum is going to do early June. :boxing:

Didn't this greedy, pathological-lying Jew hypocrite just try to blast the UFC for having an event now. What happened to safety first, and we won't hold events during the pandemic?