Bob Arum presided as Andy Ruiz’s promoter throughout the height of the heayweight’s career.

Then, earlier this year, Ruiz bought out his contract for $700,000, and parted ways with Top Rank. After Ruiz orchestrated his own free agency, he signed with PBC.

After successfully making his PBC debut on April 20 against Alexander Dimitrenko as the co-feature to the Danny Garcia versus Adrian Granados fight on FOX, Ruiz’s life changed forever ten days thereafter when he was offered a chance to fill in for Jarrell Miller and face Anthony Joshua.

On June 1, Ruiz shocked the world and pulled off the stunner of the century, a win Arum never saw coming, yet still, couldn’t be happier for.

“Let’s be honest. Andy Ruiz beating Anthony Joshua and becoming the heavyweight champion was something that nobody could have foreseen. It was like winning the lottery,” Arum told BoxingScene.com in an interview. “Instead of getting killed, he beat Joshua.” 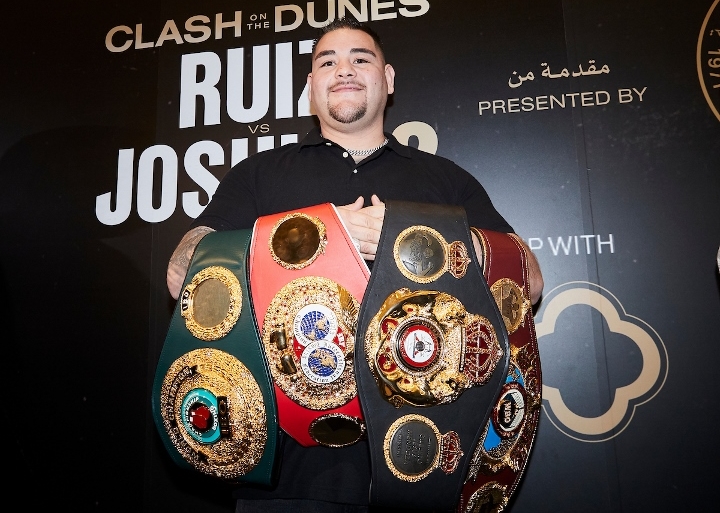 Ruiz and Arum split because the WBO, WBA, IBF and IBO Mexican heavyweight champion was asking for more money than the coffers allowed, especially after Ruiz’s uneven, 10-round performance in his last bout as a Top Rank fighter against journeyman Kevin Johnson.

“We let Andy go because of the financial demands he was making,” continued Arum. “We thought they were too high for us. We have never had anything but the utmost respect for Andy. He’s a terrific kid. He’s great. We enjoyed working with him. But these things happen.

“We didn’t renew with him and he went elsewhere and hit the lottery. Great for him. He deserves whatever he gets because he’s a nice person. When we parted with Andy, we made the right move. It happens.”

Now, Ruiz will face Joshua in Saudi Arabia on Saturday in one of the most anticipated rematches in recent memory.

“If we had a crystal ball and would have known that Andy Ruiz would even be offered a fight with Joshua, of course we would have never let him go. It wasn’t even on the board or being considered. But you can’t be pressured all the time. These things happen. I’m really, truly delighted for Andy. He was not a kid who gave us any problems. He never broke any contracts. He was always a stand-up young man. Good things happen to good people.”

[QUOTE=uppercut510;20229742]brother are you really this seriously bothered by ruiz thanking haymon instead of hearn that you typed all of this?[/QUOTE] what i typed could be said within a few mins..so it isnt a big thing 'typing' it. im watching the…

[QUOTE=Inspired;20229710]How does al haymon pay him? advisors/promoters/managers work for the boxers...ruiz pays al haymon. the $7m and $12.5m is from 2 AJ fights, not Al haymon. you think ruiz would get that with al haymon boxing pbc guys only? Why…

[QUOTE=The Boston Hera;20229329]Ruiz got his shot and made it happen. Arum skiffed and stiffed Ruiz. He disrespected him. Called him a 'ham & egger' fighter, that's a 'nobody' in layman's terms. Arum who never promoted him nor spent a dime…

[QUOTE=uppercut510;20229204]so you are angry because he speaks highly of the guy who pays him? do you go to work and openly talk down on your boss? would that be smart?[/QUOTE] How does al haymon pay him? advisors/promoters/managers work for the…