Arum Agrees: There is Argument Wilder is Hardest Puncher Ever

COSMOPOLITAN, LAS VEGAS - Now that Deontay Wilder held up his end of the bargain, his rematch against Tyson Fury on February 22nd will be formally announced next week.

Wilder stopped Luis Ortiz last Saturday with a big right hand at the end of the 7th round.  Prior to the single punch knockout, Wilder had lost most of the rounds against Ortiz.

Fury was last in action in September when he suffered a bad cut over his eye against Otto Wallin.  He was able to overcome the severe blood flow to win a unanimous decision. 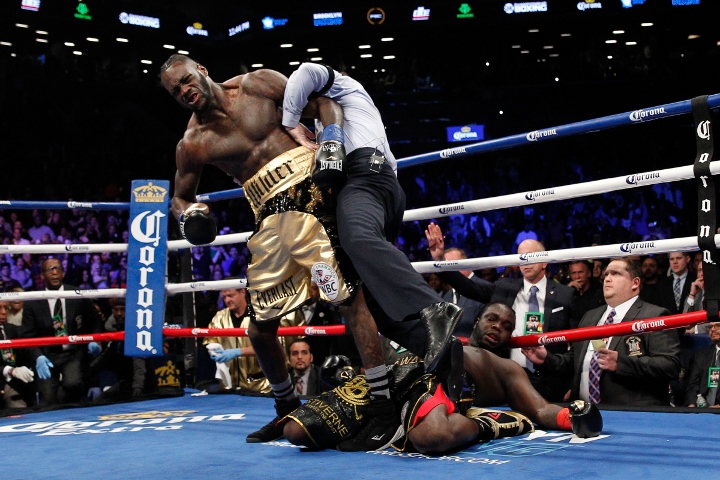 Top Rank CEO Bob Arum believes that both fighters didn't perform at their best because they both had one eye on their rematch that was already penciled in before each of their previous fights.

"I think it is very very hard when they are looking down the road to fighting each other, that they can't help but - you know - the performances that they gave weren't the best for each of them," Arum told BoxingScene.com and a small group of reporters after the Oscar Valdez-Andres Gutierrez weigh in.

After the win over Ortiz, Wilder proclaimed that he is the hardest hitting heavyweight of all time.  The heavyweight division has been blessed with several heavy hitters like George Foreman, Earnie Shavers, Rocky Marciano, Mike Tyson, and many others.

Top Rank CEO Bob Arum, who has been involved in the sport for over 50 years believes that Wilder belongs in that conversation.

"Again (Wilder is) a different type of puncher. I mean, Foreman had that thud punch. Wilder's punches are a lot like (Mike) Tyson's. They are really powerful. Whether he is the hardest puncher in boxing history - I would say their is a great argument for that," Arum explained.

[QUOTE=PunchyPotorff;20223321]Yes, Wilder is a hard puncher. The difference? Sonny Liston was a murderous puncher, PLUS he had a jab that was practically impossible to stop. Wilder? All he has is a punch. Any talented boxer embarrasses him unless they get…

[QUOTE=JLC;20225375]FACTS! Who were the top 5 in Wladamir's era ? Lewis' era Holyfield's era Bowe's ? Tyson's ? Holmes, Ali...... You really brought something to my attention here. I have never thought of it that way before. Just because Frank…

Ugh, here we go once again. Dudes who can't tell the difference between talking about a physical characteristic and skill. Just because Wilder doesn't have a lot of skill doesn't mean he doesn't have power. Who he's knocking out is…

[QUOTE=Boxingfanatic75;20223295]Time has a funny way of doing things. I watched Tyson when he was a teenager coming all they way up and I can tell you outside the top 5 in any era isn’t as dreamy as you believe them…