Arum Admits: ESPN Would Not Be Pleased if Crawford Lost

Top Rank's CEO Bob Arum makes no apologies for the tough road he's set up for Jeff Horn, saying the time has come for the Australian to start proving himself against top-echelon boxers.

Horn has complained that he feels like a "pawn" in a bigger game being played by the Top Rank promoter designed to see Terence Crawford replace him as WBO welterweight champion.

Saturday morning's clash is the second fight of a two-bout deal he was automatically entered into with Top Rank when he defeated Manny Pacquiao at Suncorp Stadium last year. The first was his voluntary defence against Gary Corcoran in Brisbane. 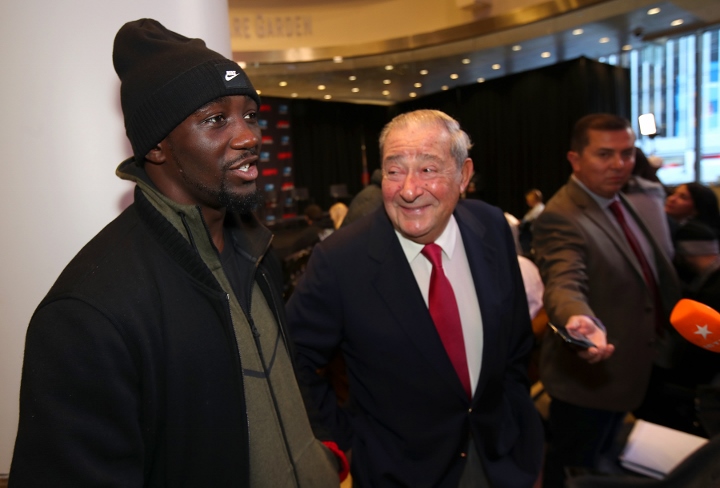 Arum described Crawford, who is arguably America's best-credentialed active boxer, as the poster boy for ESPN's broadcasting plans in the sport.

Crawford has also been earmarked as Top Rank's next big star and been given top billing on advertisements for the fight despite being the challenger.

Both companies want to see the belt around his waist, not Horn's.

Arum admits he can understand why Horn would feel hard done by.

But speaking to reporters in Las Vegas, he said: "If Horn is to be considered truly the champion, he has to beat the best and the best is Crawford."

"He emerged from obscurity when he beat Pacquiao. Now is his opportunity to show that victory was no fluke.

"If you put him in with the Corcorans of the world and he kept beating those guys, what would it really mean?

"If he beats Crawford, it means everything."

If Horn was to spring an upset it would be a major financial blow to ESPN and Top Rank but a positive outcome for the sport at large, according to Arum.

"I don't think it would please ESPN if Terence lost," he said.

"But it helps the brand, it helps boxing, if you get upsets like this.

"People like to watch sports where an athlete rises to the occasion and the result becomes unpredictable."

Arum predicted Horn would give a strong account of himself, saying not enough US pundits gave him credit for the way he bounced back from a ninth-round drubbing against Pacquiao to finish so strongly.

"(It was) something special. You just can't forget that performance when you are looking at Horn," he said.

"I think he's the kind of kid that whether he wins or loses, he's going to make a great impression in the United States."

Can't see Horn getting past Crawford. He lost to Pacquiao. He got away with all kinds of illegal tactics. Pac had a 10-8 round against him and it wasn't acknowledged by the judges. Crawford is bigger and younger than Pac…

[QUOTE=chrisJS;18833568]I'm not a Floyd fan. Not even close. Nice try. I've also not claimed Crawford to be the best fighter in the world. That's clearly Lomachenko currently (let me guess Pacquaio thrashes him too?). I also clearly stated earlier I…

[QUOTE=chrisJS;18833568][B]I'm not a Floyd fan[/B]. [B]Not[/B] [B]even close. Nice try[/B].[B] I've also not claimed Crawford to be the best fighter in the world[/B]. That's clearly Lomachenko currently (let me guess Pacquaio thrashes him too?). I also clearly stated earlier I…

[QUOTE=WesternChamp;18833513]i just explained to you!! if you're gonna just repeat yourself over again then dont quote me! i hate talking to people like this. crawford is being crown as the best fighter right now (even tho imo he hasnt prove…