MMA and boxing are crossing over once again — not in a ring or a cage, but in a video game.

Electronic Arts and the Ultimate Fighting Championship announced Saturday the latest installment of its video game franchise in UFC 4, and in addition to the roster of MMA stars, it will feature heavyweight champions Anthony Joshua and Tyson Fury in the game as well.

Gamers who pre-order UFC 4 “can play out one of the most anticipated fights in combat sports history with world heavyweight boxing champions Anthony Joshua and Tyson Fury on day one,” it was announced.

In the meantime, the score can be settled virtually in a different form of combat.

“EA Sports UFC 4 is the best fighting game ever made,” said UFC president Dana White. “Fans can play in the top arenas, as well as in Backyard and Kumite environments. This game allows you to play with the top athletes in UFC history, plus legends like Bruce Lee and boxing champions Anthony Joshua and Tyson Fury. It’s crazy how good this game is.” 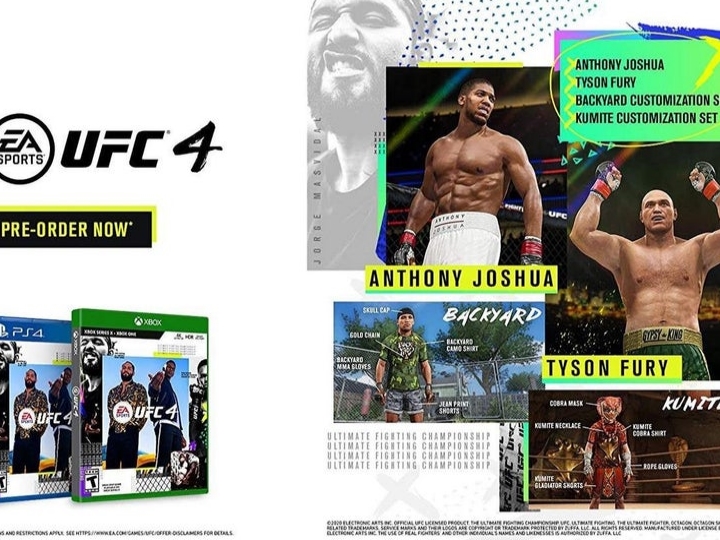 The duo of UFC middleweight champion Israel Adesanya and UFC welterweight contender Jorge Masvidal don the cover of the game. In the game's official trailer, Joshua and Fury are showcased fighting in the cage with MMA gloves.

EA Sports has previously made Mike Tyson a playable character in UFC 2.

In recent months, Fury has entertained the thought of competing in the cage with four-ounce MMA gloves under boxing rules with the likes of Stipe Miocic and Francis Ngannou of the UFC. The British boxer has even previously engaged in MMA training.

UFC 4 will be the closest boxing fans have come to playing a new game specifically made for the sweet science since EA Sports released Fight Night Champion in 2011, and Fight Night Round 4 before that in 2009. However, the video game developer stopped making new iterations of its series, much to the dismay of fight fans.

Matchroom Boxing head Eddie Hearn has made it a personal challenge and tried taking the lead by championing a new version of a boxing video game in recent months, but not much has been revealed on the ground he’s been able to gain. He’s even considered developing a boxing video game by himself.

UFC 4 will be available August 14 on PlayStation 4 and Xbox One.

[QUOTE=Rusty Tromboni;20658022]Hahahaha. Thanks for proving my point.[/QUOTE] Well no i was saying some of the guy who you brought up as mainstream werent but if you would like i can bring up fighters who are still active that are on…

[QUOTE=rocktop;20657768]Vegas, NYC and Canada when they fight all the time. Also 2 of those guys are old and Aldo isnt really recognized but Jones and St.peire are definetly mainstream i mean gsp was even in captain america movie.[/QUOTE] Hahahaha. Thanks…

[QUOTE=Rusty Tromboni;20654383]i guess. but where do you ever see a billboard wit h St. Pierre, Aldo, Penn or Jones' face?[/QUOTE] Vegas, NYC and Canada when they fight all the time. Also 2 of those guys are old and Aldo isnt…

[QUOTE=Rip Chudd;20657159]Would be nice, although I wouldn't want EA making it. Maybe get the guys that do MLB The Show to make it. They perfected baseball, I'd like to see them take a shot at boxing.[/QUOTE] Good call. The Show…

[QUOTE=_Rexy_;20652379]How about a ****ing Fight Night game?[/QUOTE] Would be nice, although I wouldn't want EA making it. Maybe get the guys that do MLB The Show to make it. They perfected baseball, I'd like to see them take a shot…