The firework erupted when Anthony Joshua hit New York City to officially announce his heavyweight title defense against Alexander Povetkin, which will be aired on the streaming platform DAZN on Sept. 22 as part of the U.S. debut of the service.

But the fireworks were not between Joshua and Povetkin.

Joshua was confronted by heavyweight contender Jarrell Miller - and the two big fighters had to be separated after a very heated exchange of words. 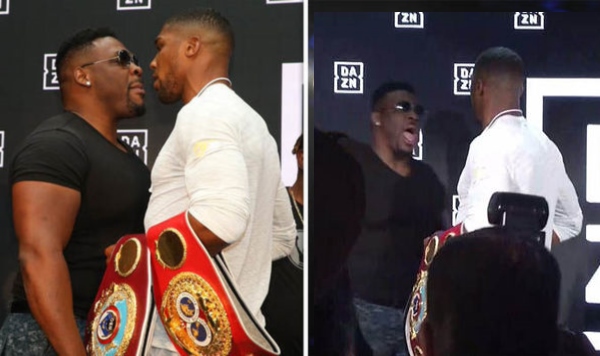 Povetkin simply stood back and watched, as the drama unfolded.

They were quickly separated before the situation could escalate any further.

Joshua and Povetkin joined the executives of the streaming company and promoter Eddie Hearn, who is the managing director of Matchroom Sport, to announce the debut telecast.

"Everything we do is new and great, so it was only right we'd be part of this," Joshua said.

In recent years most big boxing matches have been televised in the U.S. either by the premium cable networks Showtime and HBO or sold on pay-per-view through one of the two networks. ESPN signed a long term agreement with promoter Top Rank last year to provide exclusive content, and has launched a streaming service of its own, ESPN+, to show fights and other events at $4.99 a month.

Hearn said the fight card between Joshua and Povetkin at Wembley Stadium in London will be followed by an Oct. 6 card from Chicago featuring Jesse Vargas and women's fighter Katie Taylor, and an Oct. 20 card in Los Angeles headlined by super bantamweight champion Daniel Roman.

Intense stuff but Miller got to earn his shot against Joshua, don't blame Joshua for being angry they will fight eventually

[QUOTE=juggernaut666;18947996]Miller is part of the DAZN promotion ! :bottle:[/QUOTE] Doesn't matter. He has nothing to do with the fighters of the announced fight. He isn't in the team of any of them, he shouldn't been there in the announcement of…

[QUOTE=Just looking;18947978]You say it like if they would let Wilder get the least close. What was Miller even doing there? He has nothing to do with this fight[/QUOTE] Miller is part of the DAZN promotion ! :bottle:

[QUOTE=BreakingBox;18947981]You are correct, but he was talking about current top ten heavyweights.[/QUOTE] Then it will be 4 after Povetkin . Overall who Joshua has fought compared to Wilder isnt remotely close !