Another Judging Controversy Brewing Before Lomachenko-Walters

This controversy began even before the opening bell, though, not after the judges’ scorecards were submitted.

“We respectfully requested that Adalaide Byrd not be assigned to this fight,” Moretti said. “From there it went on to a conversation [with NSAC executive director Bob Bennett] about how she is a good judge. Some judges can have good nights and can have bad nights. But when she has bad nights, she seems to be too far away from the score. Bob defended her left and right. He didn’t wanna listen to our objection.”

Top Rank founder Bob Arum declined comment Tuesday during an open workout for Lomachenko and Walters, but the usually outspoken promoter acknowledged he is concerned about the potential for controversy if the Lomachenko-Walters fight goes to the scorecards. Top Rank promotes Ukraine’s Lomachenko (6-1, 4 KOs), one of boxing’s elite talents, and Jamaica’s Walters (26-0-1, 21 KOs), an undefeated, powerful former two-division champion.

Lomachenko is managed by Egis Klimas, who also manages Kovalev. Veteran Nevada judges Burt Clements and Glenn Trowbridge, both of whom scored Ward a 114-113 winner over Kovalev, will join Byrd in judging the Lomachenko-Walters fight.

“Clements and Trowbridge are consistently good judges,” Moretti said. “We have no problem with them doing the fight. But even with them, it just seemed like after everything that happened Saturday, that not having them judge Lomachenko-Walters would’ve been better for them and for the commission. They don’t need that extra pressure on them after all the controversy with Ward and Kovalev. You don’t think HBO is going to bring that up during the broadcast? But we were told they were assigned to Lomachenko-Walters before Ward-Kovalev and that they couldn’t change it. Look, the commission can do whatever it wants.” 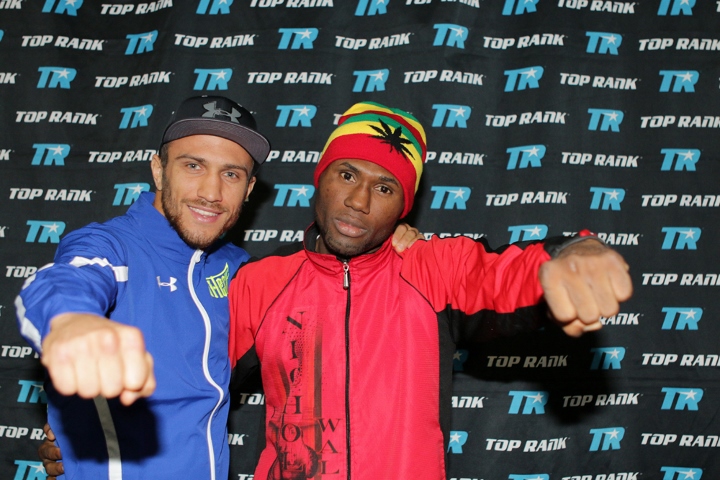 Adalaide Byrd is the wife of Robert Byrd, the referee for Ward-Kovalev. Kathy Duva, Kovalev’s promoter, criticized Robert Byrd for often allowing the Ward-Kovalev fight to become more clinching and wrestling than boxing.

Ward, meanwhile, commended Robert Byrd for permitting he and Kovalev to work out of their clinches.

Adalaide Byrd also worked the Ward-Kovalev card. She scored the Darleys Perez-Maurice Hooker fight, 97-93, for Colombia’s Perez. Her score for that bout, which was declared a draw, seemed to reflect what occurred in the ring.

Judge Robert Hoyle scored that bout, 97-93, for Dallas’ Hooker, who clearly was out-boxed by a better, busier Perez for much of their 10-round, 140-pound bout. Glenn Feldman scored Hooker-Perez a draw (95-95).

Though Byrd seemed to score the Hooker-Perez bout accurately, Moretti cited several other recent fights she scored that made Top Rank object to her working the Pacquiao-Vargas card and Lomachenko-Walters.

She scored Jose Benavidez a 100-90 winner over Francisco Santana on Top Rank’s Terence Crawford-Viktor Postol undercard July 23 at MGM Grand Garden Arena. The two other judges scored the fight for Phoenix’s Benavidez, but by closer margins over Santana, of Santa Barbara, California. Feldman had it 98-92 and Kermit Bayless credited Benavidez with a 96-94 victory.

Three-and-a-half months later, Byrd submitted another questionable scorecard during the televised portion of the Pacquiao-Vargas undercard, the show Top Rank initially requested she not work.

She scored Diego Magdaleno a 118-110 victor against Nonito Donaire in a WBO world super bantamweight title fight that seemed more competitive than that. Her co-workers that night, New Jersey’s Steve Weisfeld and Clements, thought Magdaleno won by the same score, 116-112.

Byrd also had Amir Khan ahead of Canelo Alvarez, 48-47, at the time Alvarez knocked Khan unconscious in the sixth round of their WBC middleweight title fight May 7 at T-Mobile Arena. Feldman (48-47) and Trowbridge (49-46) both had Alvarez ahead at the time of the stoppage.

Robert Byrd was the referee for the Usyk-Glowacki fight.

In December 2012 at Madison Square Garden, Byrd had Austin Trout beating Miguel Cotto by the score of 119-109. Weisfeld and New Jersey’s John Poturaj each scored that fight 117-111 for Trout.

“I’m not saying she’s picking the wrong fighters winning the fights,” Moretti said. “But you just can’t look at Santana-Benavidez and say it’s 10-0. It just wasn’t that type of fight. She also had Austin Trout beating Cotto 11-1.”

Moretti also took issue with Bennett completely disregarding Top Rank’s request. State athletic commissions and commissions that regulate boxing at Indian casino properties aren’t legally obligated to honor such requests regarding officials, yet typically avoid using judges and/or referees to whom promoters object if for no other reason than to prevent potential controversies.

“The whole process kind of feels like a joke because the Nevada commission sends out lists of officials and asks if you object to them,” Moretti said. “Then, when you object to them, you have to provide written documentation as to why. And when I did provide documentation of several scores she was off on and fights she was off on, he rejected that. So I said, ‘Well, then what’s the purpose of going through this whole process and wasting everybody’s time? If you ask for written documentation and don’t wanna read what’s in front of you or you don’t wanna believe it, what’s the point?’ We got into a heated discussion. It’s sort of like, ‘We’re here to preserve democracy, but not practice it.’ ”

Moretti also questioned the motive for the NSAC assigning Byrd to score the Lomachenko-Walters fight two weeks after her Magdaleno-Donaire scorecard raised eyebrows.

“[Bennett] knew on paper that we asked to not have her on this fight,” Moretti said. “And then he goes ahead and puts her in the main event and only televised fight on the card. The fact that she’s doing the one world title fight and the one televised fight on the card, what does that show you about the Nevada commission’s willingness to accept the respectful request of the top promoter in the world, not just Nevada, to not use her on our card? It isn’t that they can’t see the solution. It’s that they can’t see the problem.”

The absolutely last damn thing we need is another scoring problem.

When is boxing gonna stop punching it self in the face?

[QUOTE=nycsmooth;17224422]Byrd & Lisa Giampa, IMO, are the 2 most inconsistent judges in Nevada & @ the evel w/Cynthia Ross & we know where she went.. it would be a smart move not 2put her in this fight...last thing needed is…

[QUOTE=buge;17225216]Adalaide Byrd can consistently be counted on to score for the Black boxer.[/QUOTE] That was definitely the case in the past, which made me keep an eye on her. She honestly isn't as bad about the race thing now but…

Byrd has had some "interesting" scoring but she's better than Patricia Morse Jarman, who continues to get big fights in Vegas despite a history of horrible scoring. Vegas promoters really need to get some new judges