Angulo: Al Haymon Has Given Me Far More Than I've Given Back

Alfredo Angulo isn’t just falling in line with every other Premier Boxing Champions (PBC) athlete when he thanks Al Haymon before and after a fight; the proud Mexican warrior genuinely means it.

His latest form of gratitude for the high-powered, low-profile adviser came in the form of a 10-round win over former middleweight titlist Peter Quillin. Their thrilling slugfest took place Saturday evening at Rabobank Arena in Bakersfield, Calif., with Angulo landing the more telling blows over the course of their FS1-televised main event between faded contenders.

“This one was for all my fans who stuck with me through the years,” a humbled Angulo (26-7, 21KOs) stated afterward in scoring perhaps his biggest win of the decade. 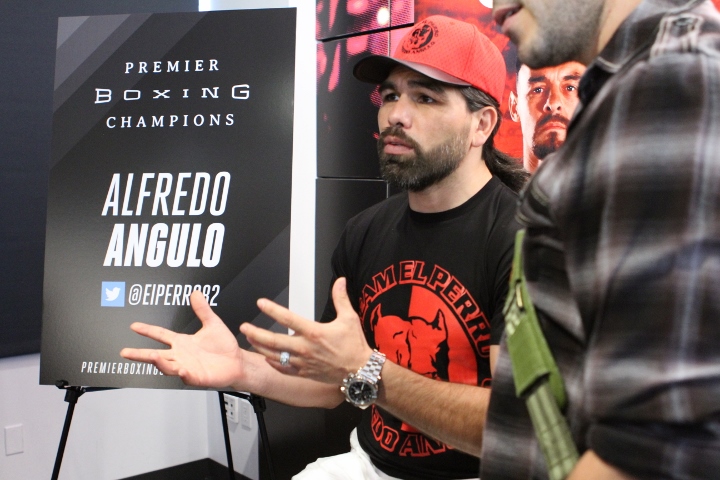 The win was his second straight following a rough stretch where he’d lost five of seven starts. Through it all, Haymon and the PBC brass never abandoned the 2004 Mexican Olympian, who has a renewed desire in the sport since working with renowned trainer Abel Sanchez at The Summit facility in Big Bear, Calif.

Angulo has since rewarded them with two wins, both of which came with his putting his best foot forward.

“For the past 5-6 years (prior to 2019), I never felt complete,” Angulo told BoxingScene.com. “I was training for fights but I felt like I wasn’t getting any better and it showed in the ring. But I remain grateful to Al Haymon and all that he’s done for me and my family.

“He’s like a father figure to me and—I have to be honest—he has given me far more than I’ve ever given him back in the ring. It meant so much to be able to give a performance like this, to show that I’m still willing to give everything I have to reach my goal of winning a super middleweight title.”

why is everyone around here so angry at al haymon???? the guy has never done an interview and all his fighters speak highly of him, thats some serious crazyness

Does that mean he will give Quillin a rematch?

Race? Go tell that to fans that have Crawford P4P #1 over Loma, Canelo and GGG. By your logic, fans that see Spence & PBC spit out excuses like a PEZ dispenser must be color blind. GTFOH! Calling race when…

[QUOTE=j.razor;20076531]Fools that stand up for those corrupt promoters are just that....fools![/QUOTE] Corrupt promoters? Boxing has always had it's shady characters and some good guys. Define corruption?