As soon as the San Jose product rebounded from the lone loss of his pro career against Albert Bell in June 2019 with an October victory over Mark Bernaldez, it was a quick honeymoon in Jamaica with his wife, then back on the job, both in the gym and in the security field.

And when the COVID-19 pandemic hit, the 29-year-old didn’t skip a beat. In fact, he picked up more security work.

“I was very, very busy during this whole pandemic,” said Vences. “It's been a crazy ride, but I'm glad I got through it.”

Add in an apartment move, building his own home gym, and having someone bang his vehicle up, and “crazy ride” may not completely cover it. But Vences isn’t complaining. He just puts his head down and does whatever is necessary to get the job (or jobs) done.

Note that there was no talk of boxing during this time, and that’s because boxing was put on pause as the world dealt with the pandemic. It wasn’t far from Vences’ mind, though, and he knew that eventually, it would come back. So he wasn’t going to get caught unprepared if the phone rang.

“Throughout the whole pandemic, I was very focused, training and working and having faith, just knowing that this was going to be an opportunity for people who stayed ready,” he said. “My whole life since I joined boxing, I've always stayed in shape and always believed in boxing being my lifestyle. Like they say, no boxing, no life. That's basically how I live my life. I'm always training, I'm always in the gym.”

Even during the last few months, when he couldn’t work with coach Angel Cordon Sr., Vences got in the time both by himself and with his dad Sifredo.

“I was working out during the week and my dad would go with me to the track on Saturdays and we would do our routine,” Vences said. “He would hold the shield for me and do whatever he could do to help me as a trainer since I wasn't making contact to see my trainer just for safety. And then all this came through and I started hearing talks that I might have a fight. That’s when I walked away from that second job and just kicked it up another notch.”

Those talks turned into a fight against Mexico’s Luis Alberto Lopez on Tuesday in Las Vegas. It’s not a tune-up or stay busy bout for Vences, and that’s fine with him.

“I know he comes to win,” said Vences of the 20-2 Lopez, who has won eight of his last nine on his way to this week’s bout. “He's upset undefeated fighters before, so it's going to be a very intense fight.”

It’s the kind of fight that several favorites have had since Top Rank opened the doors to boxing here in the United States again and several have lost. Vences is well aware of what’s been going on the last few weeks, he knows why it’s happening, and why he won’t let it happen to him.

“I feel the only reason why you're seeing a lot of upsets in boxing involving Top Rank fighters and a lot of fights going on where you're seeing the underdog come out on top is because this is showing who's really disciplined when things weren't happening,” he said. “Who was sitting on the couch and who was doing their roadwork and working in the gym? And that's what I feel I'm gonna show this fight is that I haven't taken a step back. People are gonna see, even though I fought in October and there was this pandemic that he's so sharp and so on point as if he just had a fight. Why? Because I've always remained disciplined throughout.” 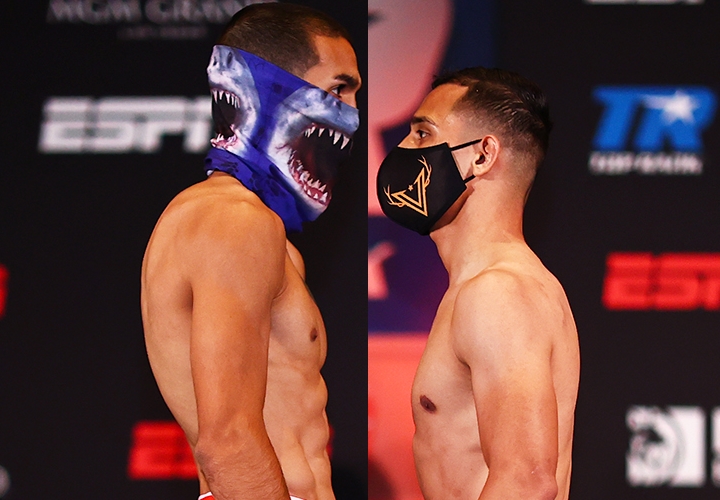 The last 13 paragraphs spelled out how Vences’ work ethic and discipline drive him. The why is that such an attitude will take him far in a sport where putting in the work is a prerequisite for long-term success. As for the where, he needs to look no further than his father.

“When I first started in boxing, my dad told me, ‘If I don't see improvement in a month in boxing, I'm taking you out,’” said Vences. Sifredo knew that improvement would come with time spent on his craft, so if his son wasn’t getting better, he wasn’t working.

“We would look at boxing and we'd see a technical fighter against a guy who wasn't a technical fighter but had an extreme amount of conditioning and came in shape,” recalled Vences. “And sometimes the guy that didn't have the skill but was in shape would beat the guy that was supposed to win and was very skillful. So my dad always ingrained in me that your condition needs to be your top priority. You need to base everything you do on your conditioning because you don't ever want to fight someone who can outwork you just because you weren't conditioned enough.”

Vences points to the upcoming bout with Lopez, noting that it’s not being fought at a catchweight, but at 130 pounds.

If it appears that Vences has moved on from the upset loss to Bell last year, that’s an accurate assessment. It’s all about Tuesday night and beyond.

“My coach always says you're only as good as your last fight,” Vences said. “That's what people remember. Just knowing that was a decision loss to Albert Bell, it's not something that I let bother or define me. If anything, I learned a lot from that fight. And I know it's been a short time, but I feel I've grown so much since. People know I'm better than that, and I got a lot of messages after that fight; a lot of people thought I won it, a lot of people thought I got outboxed. There were a lot of things. But that loss on my record, I don't really feel like it's a loss.”

That doesn’t mean he wouldn’t like a little payback, both against Bell and the man he fought to a draw with in 2018, Erick De Leon.

“Down the line I would want a rematch with my draw and my loss just because I feel in both my loss and my draw, 12-round fights would have made the difference for me,” he said.

It could very well be the difference for a fighter who prides himself on his conditioning and being able to swim in deep waters, and if he keeps progressing to the point where he gets a title shot at 130 pounds, he believes nothing will stop him from reaping the rewards of all that work put in over the years.

“My main goal is to be a world champion, but another one of my main things is to always fight the best,” said Vences. “I feel like the worst thing already happened to me and that was losing my undefeated record. So I feel like going into the fights, there's nothing that I'm doubtful of. I've always wanted to fight the best, so yeah, win or lose, I just want an opportunity. I want to fight the best guys in my division and be remembered. I know what I bring to the ring, I know what I can do in this division and I feel I can beat all the guys. I really believe in myself.”