Andy Ruiz: I Have Not Signed Anything Yet, I Want Rematch in NY!

IBF, IBO, WBA, WBO heavyweight champion Andy Ruiz has double-downed on his stance that a rematch with Anthony Joshua is not finalized.

Ruiz is disputing the recent statements made by Joshua's promoter Eddie Hearn, who on Monday announced at a press conference that a deal had been signed by both sides to do the rematch on December 7th in Saudi Arabia.

Ruiz shocked the world in June, when he stopped Joshua in seven rounds to capture the unified crown. He dropped Joshua four times before a stunned crowd at Madison Square Garden in New York City. 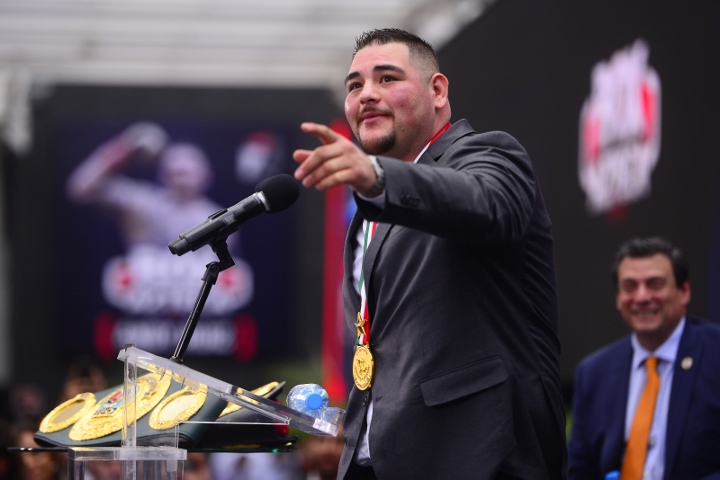 Prior to the first contest, both sides signed a contract with agreed-upon terms for the rematch.

According to Hearn, the terms of that contract give Joshua the power to select the location of the second fight.

Ruiz is standing his ground, that he never agreed to anything and for the moment he's refusing to go to Saudi Arabia.

"I have not signed anything yet (to fight in Saudi Arabia), we are negotiating everything. They want to do the fight over there (in Saudi Arabia), but we have to see where (it takes place) and we will negotiate that with my team. I would like it in New York again, where I won. I'll give him a chance to try to beat me, and if he wants the belts, he has to do it there," Ruiz told ESPN Deportes.

Hearn has already mentioned the possibility of a legal battle, if Ruiz does not honor the terms of the rematch agreement.

In the rematch, Ruiz expects Joshua to use his feet to move around the ring, to create distance for long punches and combinations - but he doubts Joshua can pull that off.

"I think he will want to run a little more, move around, but he is too big, he has a lot of muscle and it will be very difficult for him to do that," said Ruiz.

[QUOTE=deuce_drop;19991009]Don’t sign nada til you get what you want. Fights are won in the negotiations. Period.[/QUOTE] Great advice here and very relevant for Andy.* *Before he signed the contract to fight Joshua which included a rematch clause with a flat…

Joshua will be retired after the fight

[QUOTE=Monty Fisto;19990973]We know there was a rematch clause. No one is disputing that, not even Ruiz. He is therefore not honouring that clause. [/Quote] How is he not honoring the contract if he's not disputing the rematch? Like you said…

Don’t sign nada til you get what you want. Fights are won in the negotiations. Period.

[QUOTE=Jewish-Reptile;19990448]Andy holds the belts and isn’t obligated by them to honour rematches by promoters.[/QUOTE] He's obligated to obey the law. If he signed a contract that gave him the first fight contingent on a rematch if he won that first…